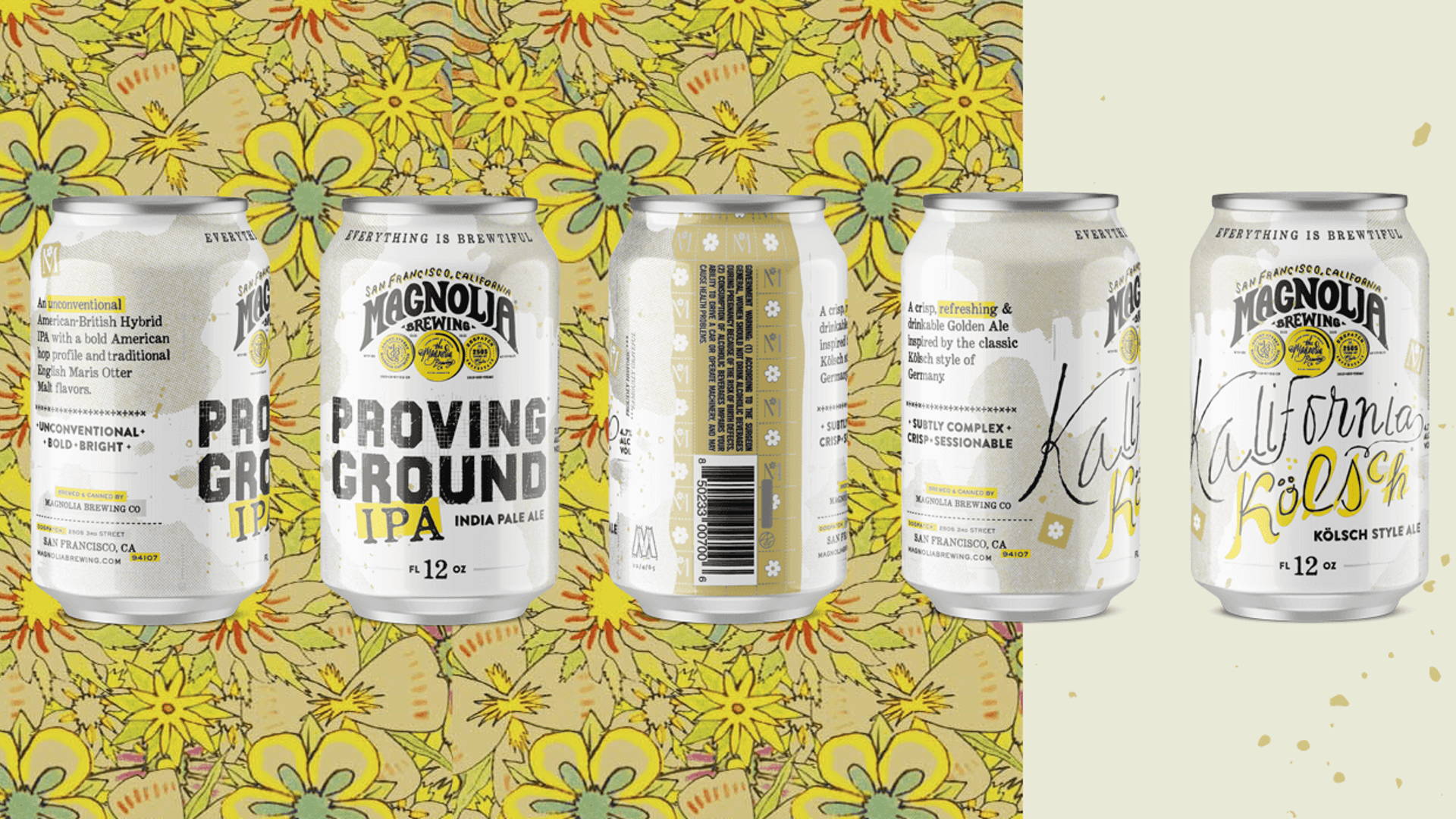 Designing the Beer from One of San Francisco’s Iconic Breweries

Twenty years ago, Magnolia opened at the corner of Haight and Masonic Streets in the Haight Ashbury district of San Francisco. The building is full of rich history, though, as their site explains. “Built in 1903, our building has seen a lot over the years, from its decades as Schumates Pharmacy to its role in the birth of the Haight Ashbury hippie movement in 1964 as the Drugstore Cafe, one of the original hippie hangouts in the neighborhood. In the late 60s, it became the famous Magnolia Thunderpussy's, named for its proprietress, a larger than life San Francisco legend still talked about today."

We spoke with Shawn at Gamut in San Francisco, who designed the packaging for this latest release and important milestone for Magnolia’s journey, about designing for a saturated market, trusting your instincts, incorporating heritage and history into packaging, and more. 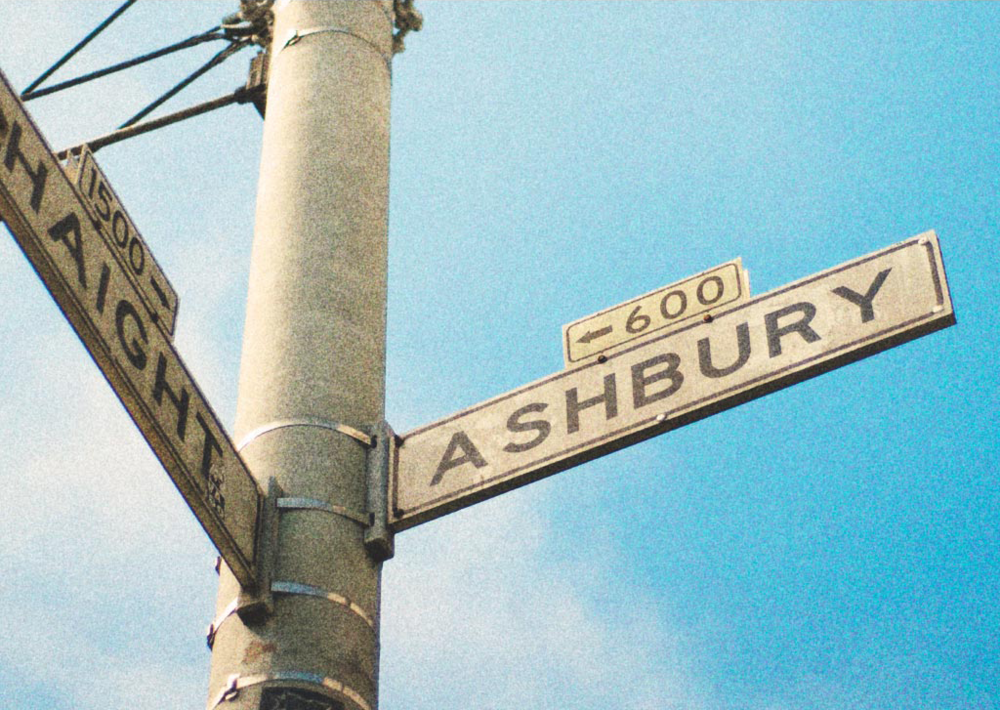 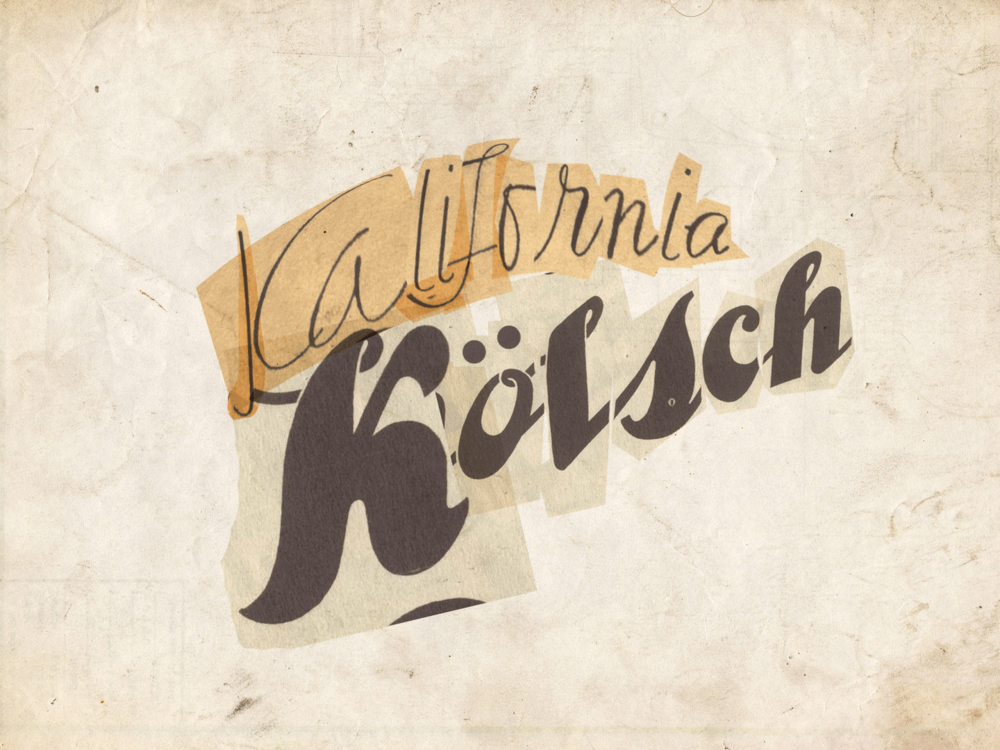 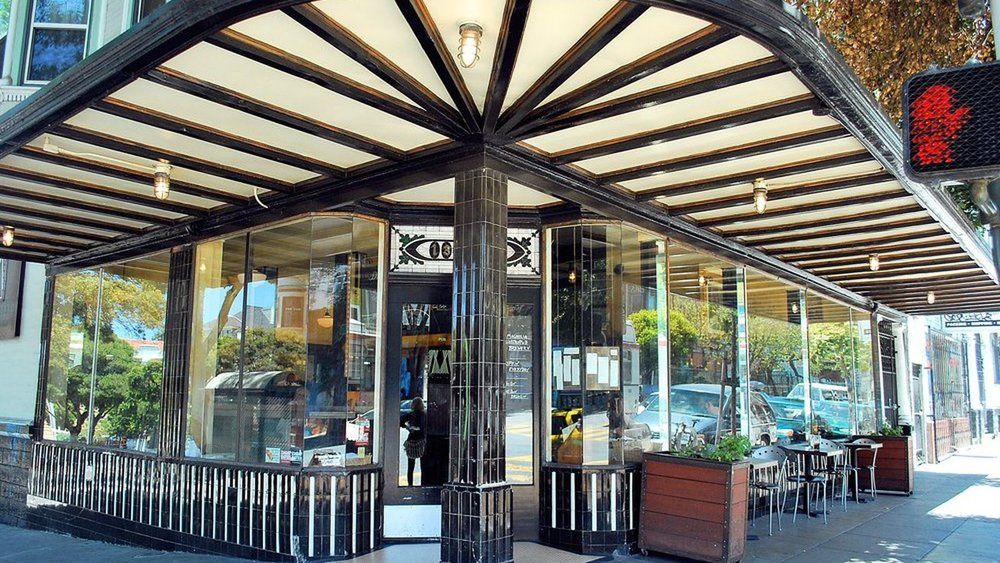 Gamut: Well before Kevin Landwehr and Dave brought us in to develop the design for the packaging system, a rich palette for us to work from had been brewing for almost 10 years. Our work began with the decision to lead with the core Magnolia Brewing Co. identity to give ourselves a solid visual base to build from as we expand the product line. The identity system has a lot of secondary and tertiary pieces that we’ve brought together so that people can really enjoy the intricacy and love Kevin poured into the identity. For the 6-Pack and Mother Carton we created lots of variation and allowed the branding to flow around the box to catch your eye as a stacked display in-store and encourage you to pick it up and explore its intricacy.

This is a bit of an inverted approach to most beer packaging where the brewery brand takes a back seat to an immersive story about the individual beer. That said we didn’t just type out the names of the beers, we built them from the ground up by sourcing early 1900’s type samples and collaging them together to build the aesthetic. Similar to how the pub and smokestack were designed by Kevin we resurrected something old and forgotten to tell a new story in a space that would otherwise be cold and sterile—to give the branding a meaning and sense of purpose. Kalifornia Kölsch has a light, wispy effervescence you can get lost in, reminiscent of the afterglow of a beautifully mind opening trip. While Proving Ground has a structure and framework that implies the building block that this beer was being one of the first IPA’s Magnolia brewed 20 years ago as a way of experimenting with hoppiness in beer. If you look closely at the cans and boxes there are hidden bits of numerology and iconography that all correspond to important moments in Magnolia’s history.

The Magnolia ethos is so layered with history and eccentricity that we couldn’t get it all in one shot, and plan to slowly unveil that story as the product line grows. These initial two packaged products will serve as the visual anchor for the brand on the shelf. As we go forward we’re going to peel back the layers of history in colorful and interesting ways. 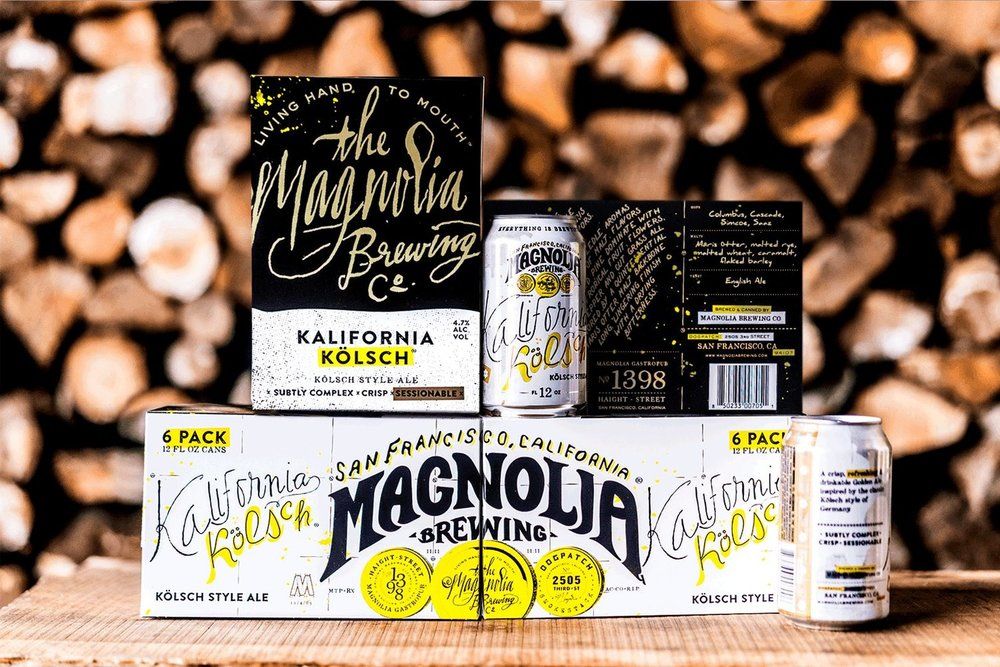 What was one of the biggest goals you set out to achieve with Magnolia Brewing packaging and how did you accomplish it?

Gamut: Getting a packaged product to market for the first time since founding the brewery in 1997 was a huge milestone for Dave. The biggest goal for the packaging was to create a bold and impactful expression of the brand that could cut through the noise on the shelf and help cement in people’s minds Magnolia Brewing Co.’s presence. Everyone who enjoys craft beer in San Francisco has heard of Magnolia; they’re an institution and loved in the local community. But most people probably couldn’t identify or recall the recently created brewing company identity due to the amount of layering and evolution the brand has gone through, as it’s grown the last 20 years, but especially in the last 3 years.

We accomplished this by first telling a visual story about Magnolia Brewing Co., laying the foundation for the brand. That play is pulled right from the brewery packaging playbook from the beginning of time until Fritz Maytag invented craft beer in the 70s—when everything was a brand name, Schlitz, Hamm’s, Olympia, Pabst…—now the industry is flooded with so many beers everyone is competing for space with super-punny beer names. 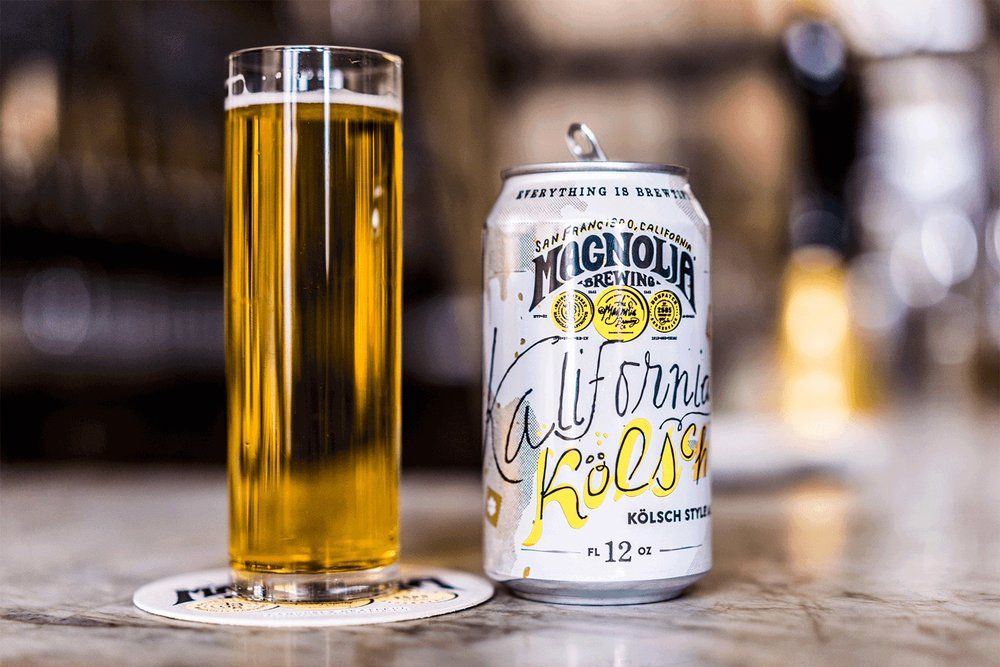 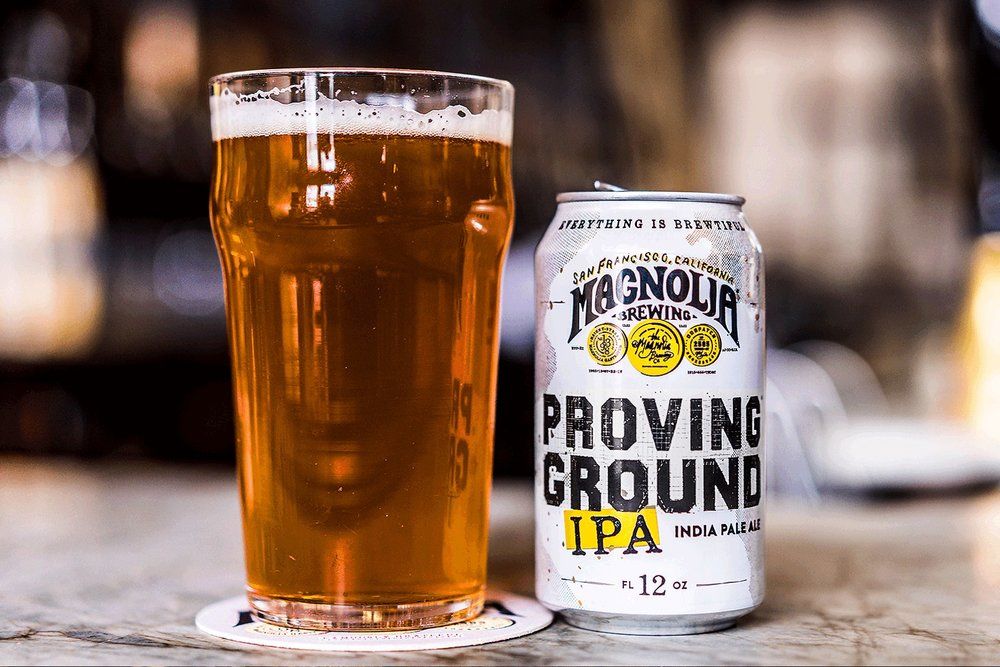 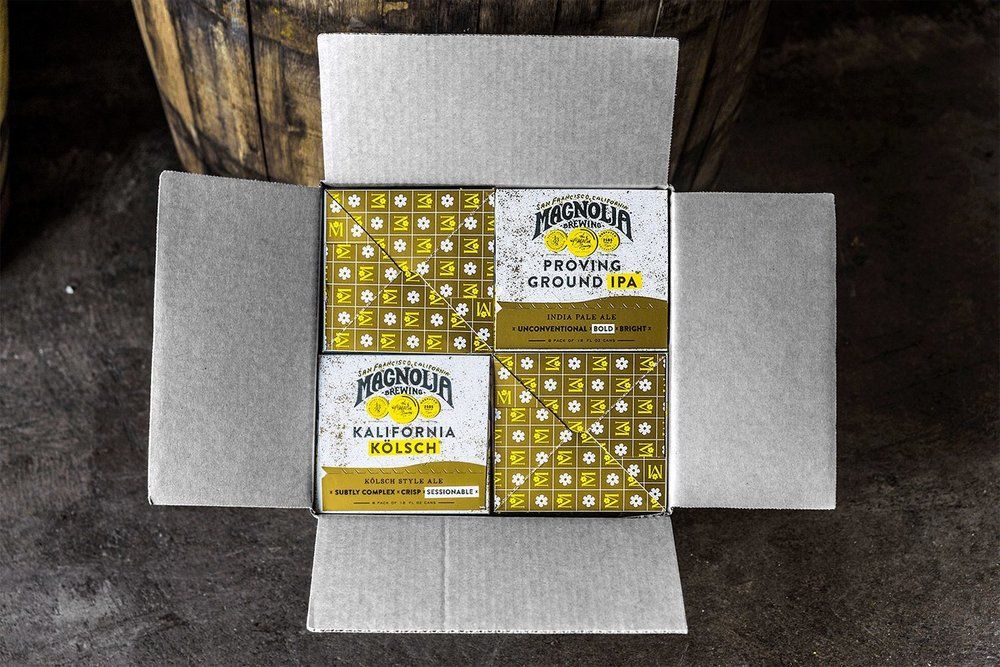 Gamut: Making our 6am press check on 3 hours of sleep! Our pilot run (where you get to see the cans on press and ensure the pre-press process has accurately translated to a physical can before the big print run) for the cans was at Ardagh Group in the suburbs outside of Chicago, a little place known as Elk Grove Village, home of Billy Corgan of the Smashing Pumpkins. The excitement as we rolled up to the Elk Grove, Country Inn & Suites was palpable as you can imagine. Needless to say, we called up an Uber and for $80 were on our way to partake in the delights of Chicago.

But seriously, the most challenging part was to trust ourselves, to be good stewards of the brand, to carry the torch, to not overthink it, or try too hard—but just do our best and if you haven’t done it before as a packaging designer, pre-press for aluminum cans is painfully tedious.

Magnolia Brewing is located in one of the most iconic areas of San Francisco: Haight Street. How did you incorporate a sense of place and history into the packaging?

Gamut: There’s so much heritage and history rolled up in Magnolia’s brand, it’s a tale best told in a dark bar with a frosty beverage in hand. Magnolia itself, in it’s 20 years on Haight has become part of the fabric of the Upper Haight. There wasn’t much need to try and pull from anything outside our own walls, no 60s flower power, no VW Vans. The brand identity we had at our disposal is fully loaded with innuendos and hidden bits that make for good conversation starters. 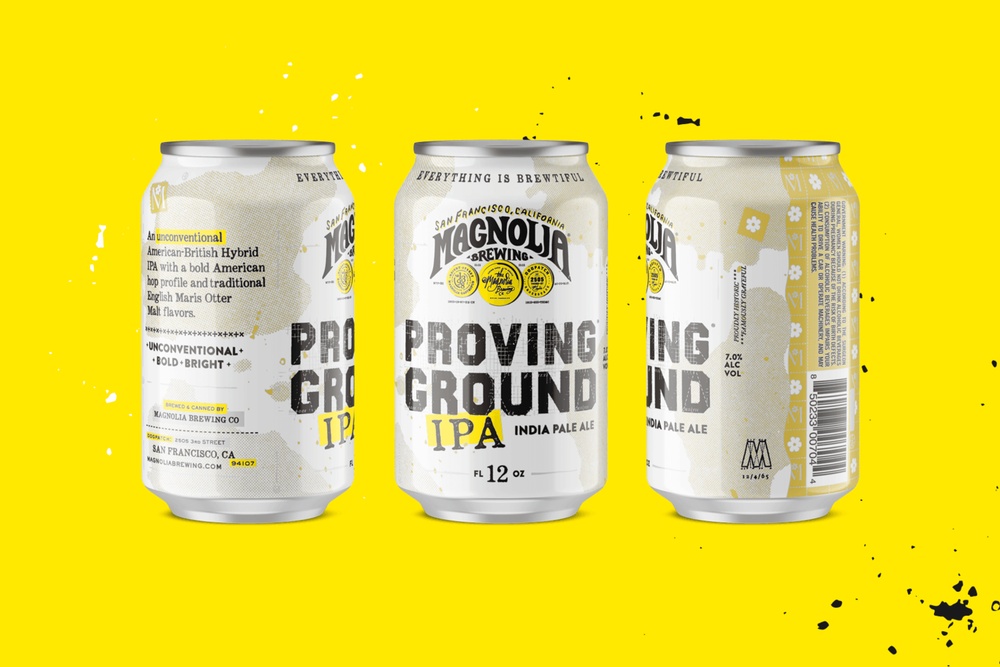 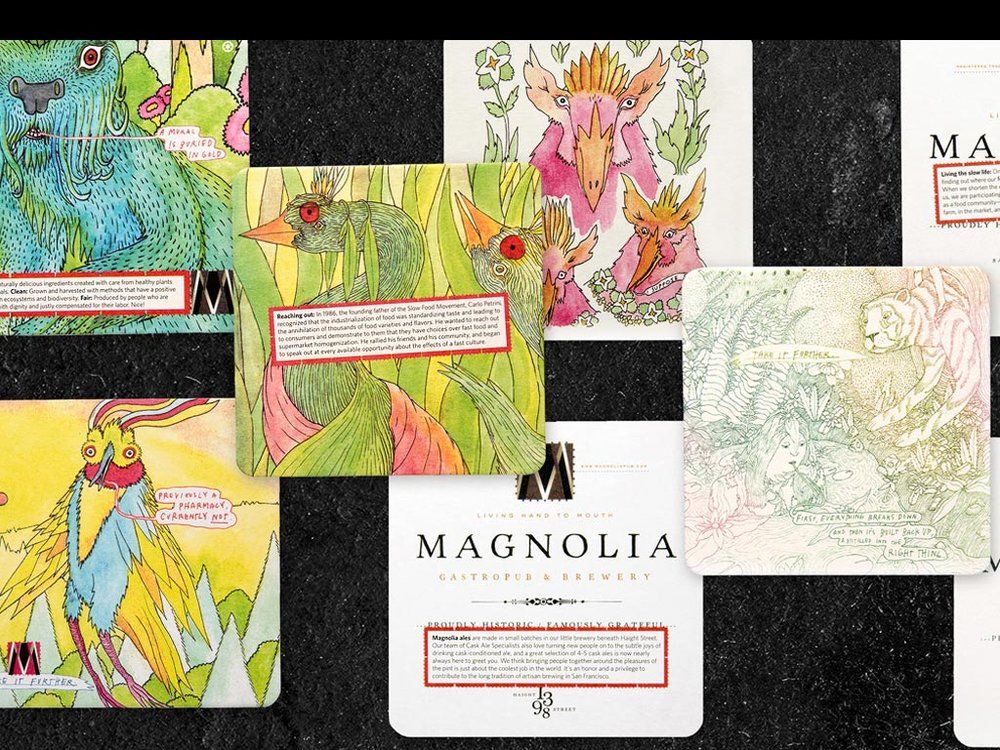 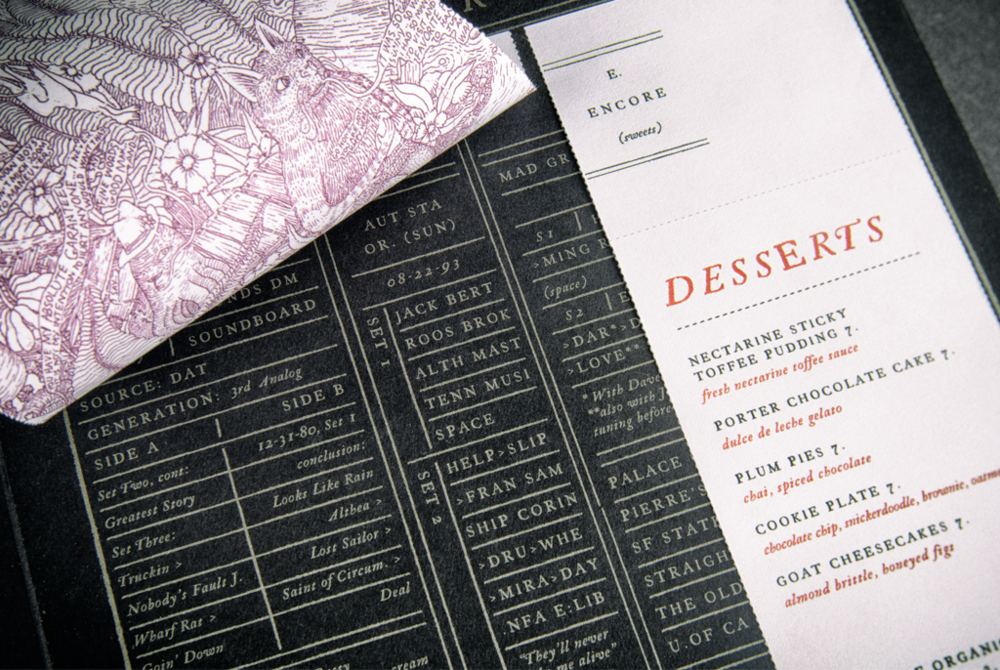 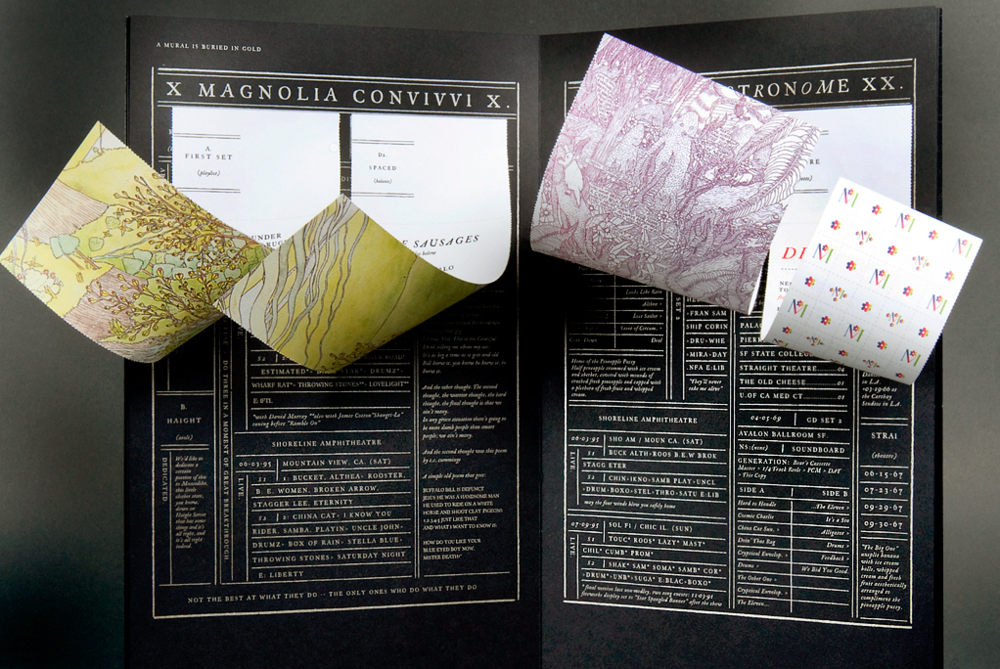 The packaging has many different elements that come together, so how did you balance including these without giving it a cluttered appearance?

Gamut: We definitely let the brand stretch out across the whole dieline on the 6-packs. What holds it all together is the limited use of color and allowing the branding to break edges and flow naturally. It was important for us to make sure the brand on packaging didn’t lose the soul of the Magnolia experience by becoming too clean or too simple. Using the aluminum canvas to help bring in layering and detail that wasn’t harsh or conflicting was a nice way for us to be able to do that.

Gamut: We feel most proud of what this initial release means for Magnolia. It’s the beginning of a new chapter for one of San Francisco’s most cherished breweries. It was a special opportunity to work with old friends.

Gamut: There’s so much competition in beer packaging space these days. Just relax, turn off your Pinterest feed, be true to your client and the brand, and the finished product will be true to you. 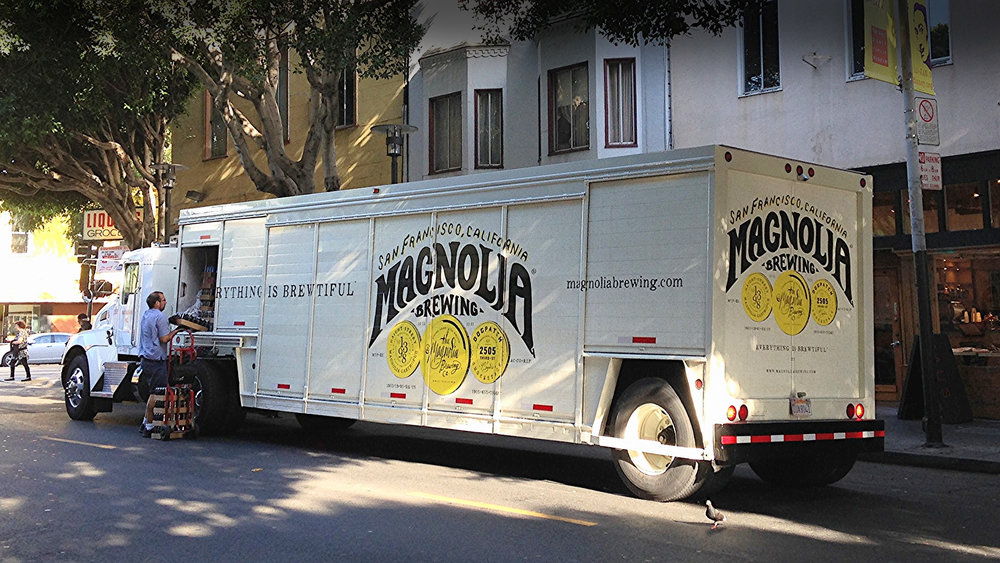 Why Designers Need to Start Thinking of Themselves as Leaders

Zmoo is a Fun Take On Bottled Smoothies