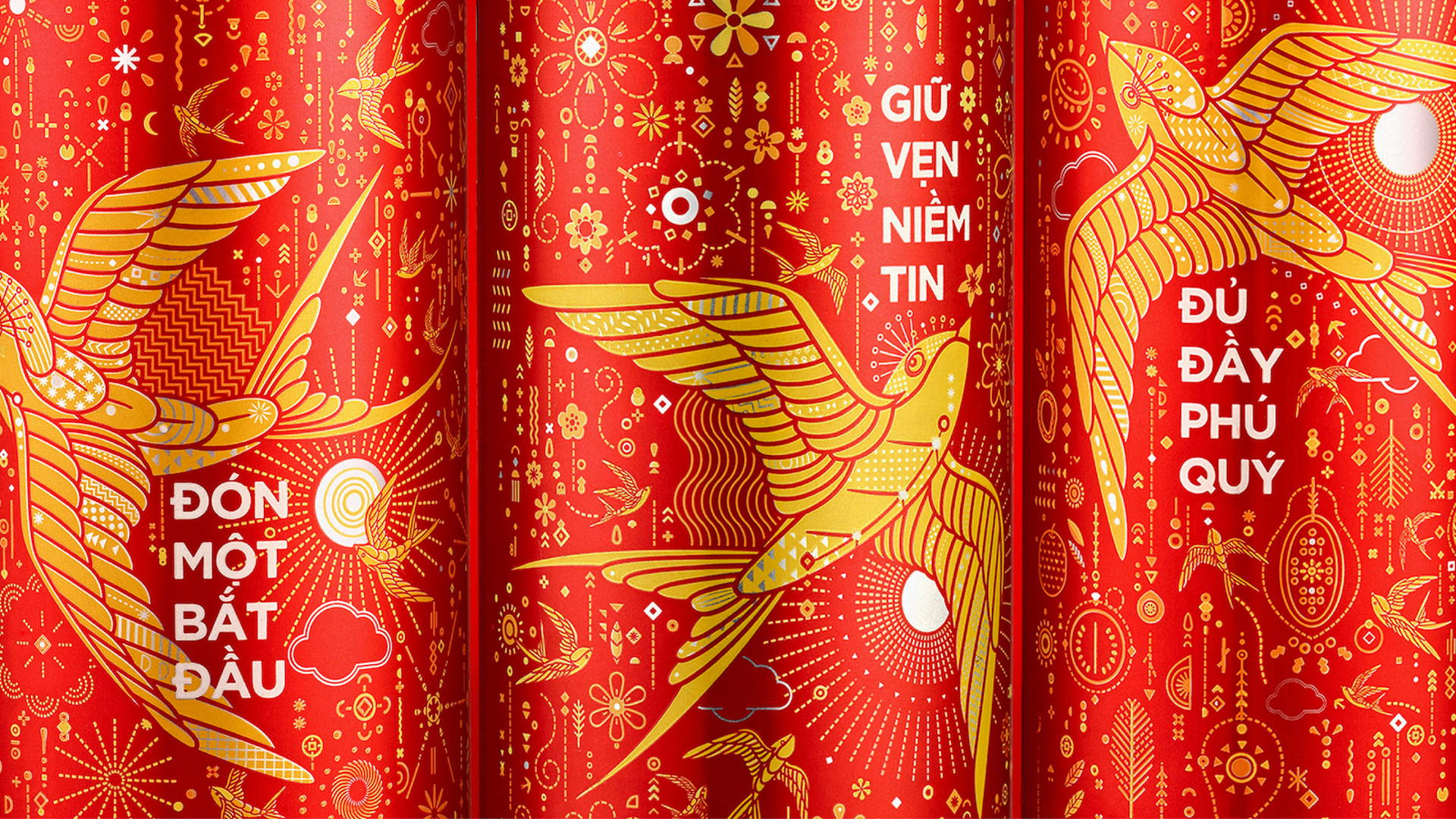 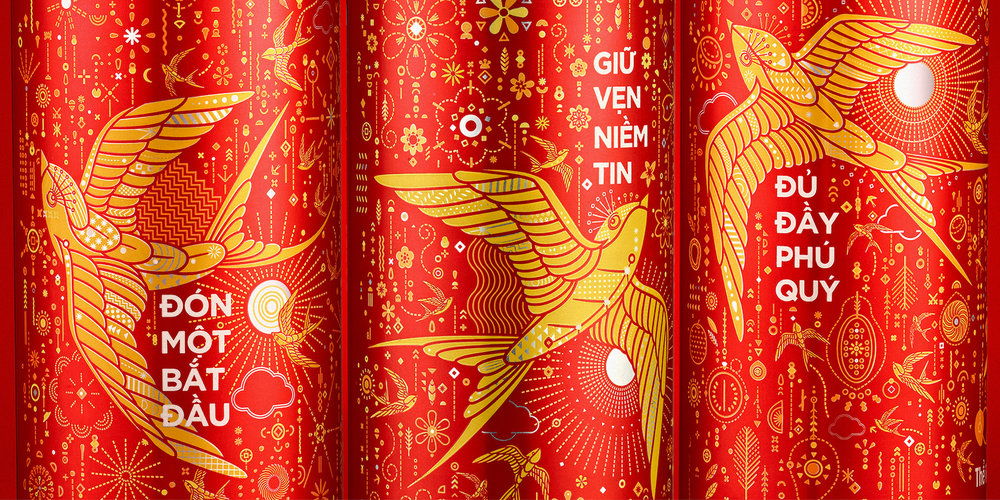 Who: Vietnamese agency Ki Saigon is behind this special Coca-Cola packaging. Working with one of the most well-known brands in the world, Ki Saigon aimed to create something that would take the work to new heights. By employing their thorough creative ability, they’ve made a Coca-Cola that looks totally different than what has come before it.

What kind of research did you do for this project, and how did you tie in your discoveries into the finished packaging design?

Ki Saigon: Coca-Cola conducted a thorough understanding on the cultural shifts and beliefs about Tet, even before the briefing of the project. Their input in the design brief was critical, inspiring, and challenging. At an agency level, we studied the symbols, colors and shapes (related to Tet) that have stood the test of time.

In the end, we concluded that for the Vietnamese—Tet means “new beginnings” above all. It is a time of renewal, forward thinking and time to instil a strong sense of belief in the good things to come. We wanted our design to be a signal of that emotion.

Why did you decide to include many small graphics and images, and what is their significance?

Ki Saigon: We wanted to capture the emotion on the nation through maximalism. Each of the small graphics and images have a deep cultural significance. For examples, the five fruit plate is an age-old ritual, where each of the fruit chosen, arrangement of it, and the offering holds cultural resonance.

Tell us more about the swallow—why did you choose this symbol and what all does it represent?

Ki Saigon: Back in the days, when there were no smart phones, reminders, and minute-to-minute tracking—the arrival of swallows signalled the arrival of spring time. Originally, Tet was time, when the harvest was done and the spring arrived, and the belief is that the swallows bring that emotion. The sighting of the bird makes people believe. So, because swallows have a deep association with Tet and more importantly the symbol gives people the belief in the new beginning, we wanted to keep this symbol at the heart of our design. 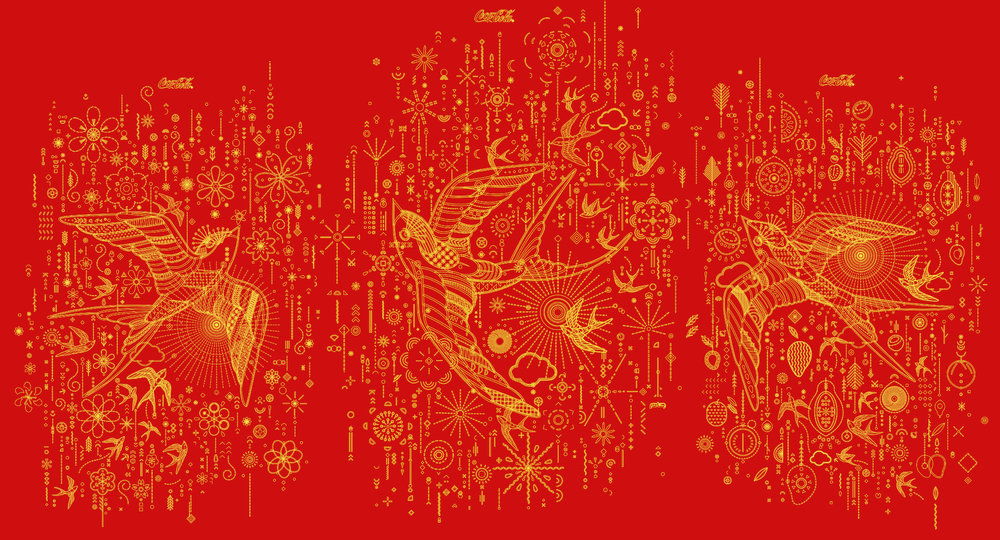 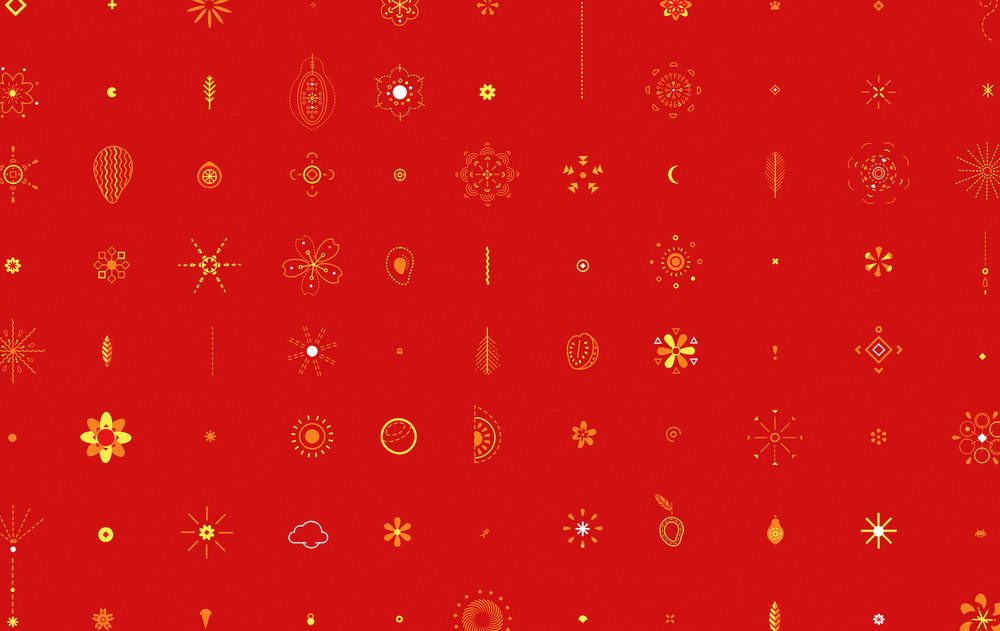 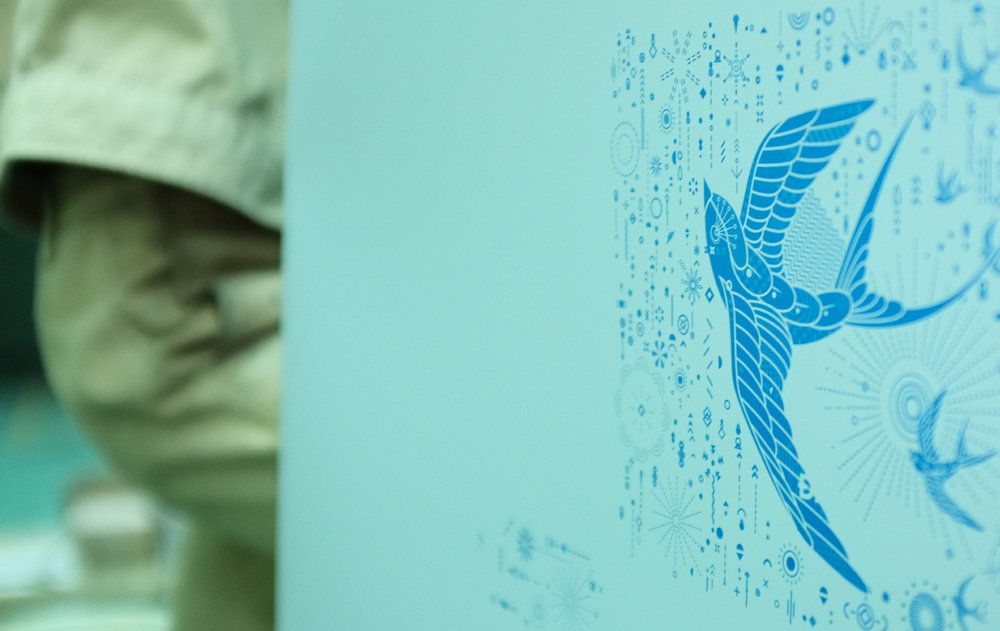 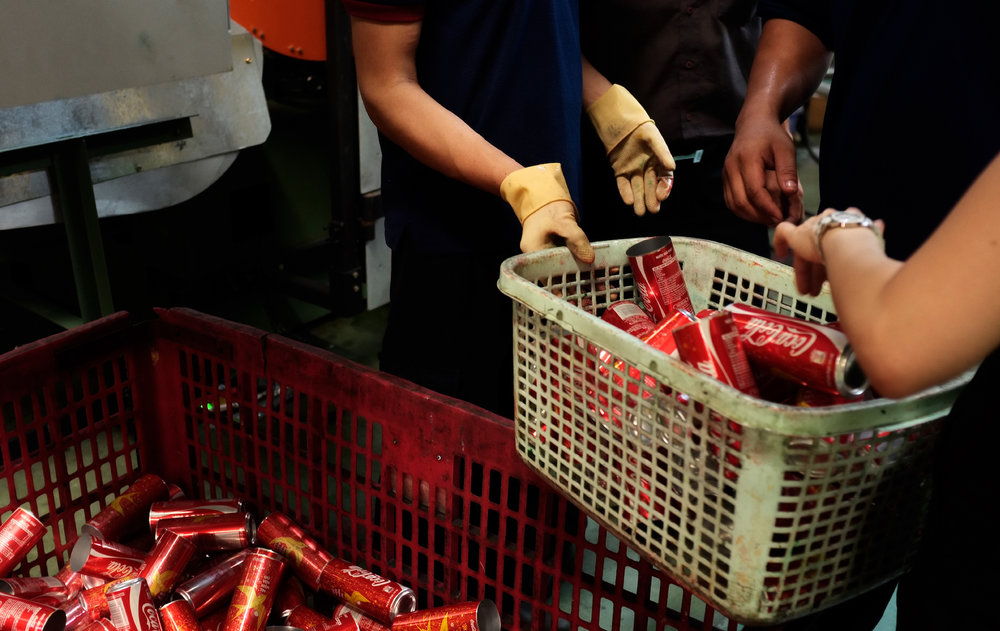 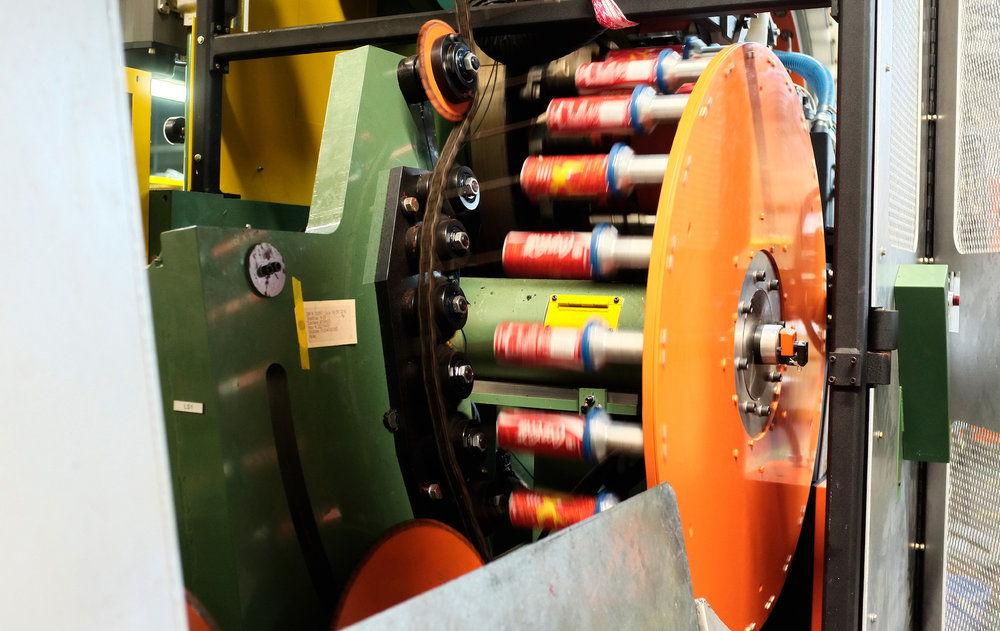 Why did you stick with the traditional Coca-Cola red and white and use only gold in addition?

Ki Saigon: Coca-Cola red and white are iconic and a part of a global design guideline that keeps the brand consistent, yet creates room for original design thinking. The color red and gold are two of the most auspicious colors of Tet. Luckily, Coca-Cola red is something that is known and loved—the addition of gold and silver lifting the pack to be more festive and auspicious.

What was the hardest  part of the process, and how did you overcome it?

Ki Saigon: The hardest part of the process was to get the initial designs for a concept to the printing of the can. We have to understand the printing restrictions and at the same time innovate/find ways to get our desired effect. We wanted to use the surface to create a kind of a depth that had not been done. Our designers travelled to all the major printing facilities in Hanoi, Ho Chi Minh City, and even Bangkok to work with the printers to get the right can from the computer to the hands of the people. 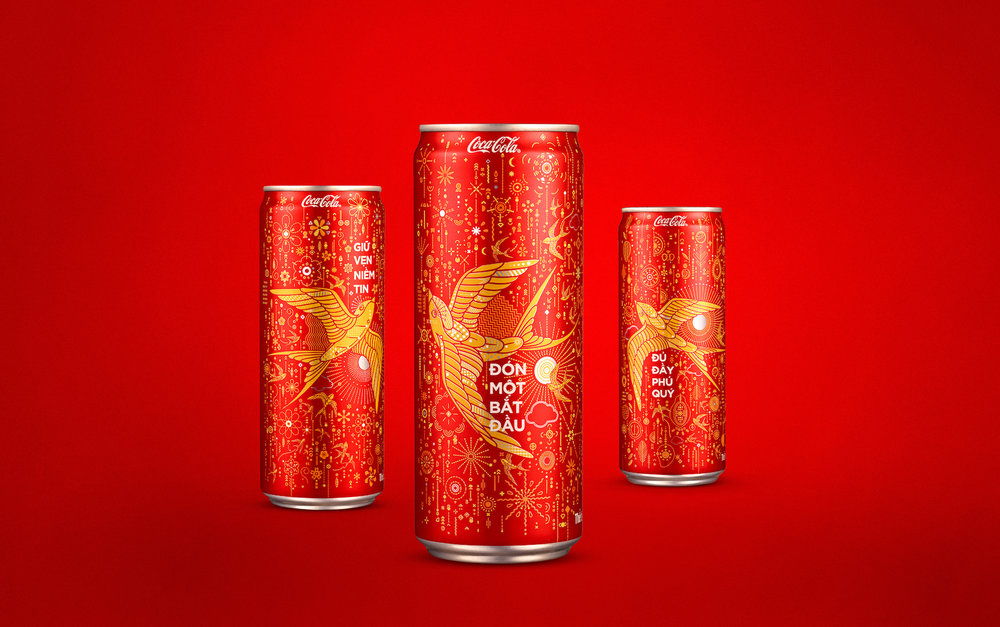 What emotions were you hoping this packaging to evoke, and what elements contribute to those feelings?

Ki Saigon: A sense of positive belief in the future & a belief in new beginnings.

The design language was conceived for 3 distinct Tet messages that bring the idea to life:

Why we love it: Coca-Cola is iconic. Everyone knows it and the classic colors are instantly recognizable—and while you won’t mistake this can for some other soda can, it’s delightfully different. Not only does it promote a message of positivity (“Believe in a new beginning”), but it truly brings the consumer closer to the culture. The graphic combination is lively and inspired by the message of hope and a prosperous future, which is just what 2017 needs.

What Can You Expect This Year At The Dieline Conference?

How Laser Art Can Enhance Your Packaging