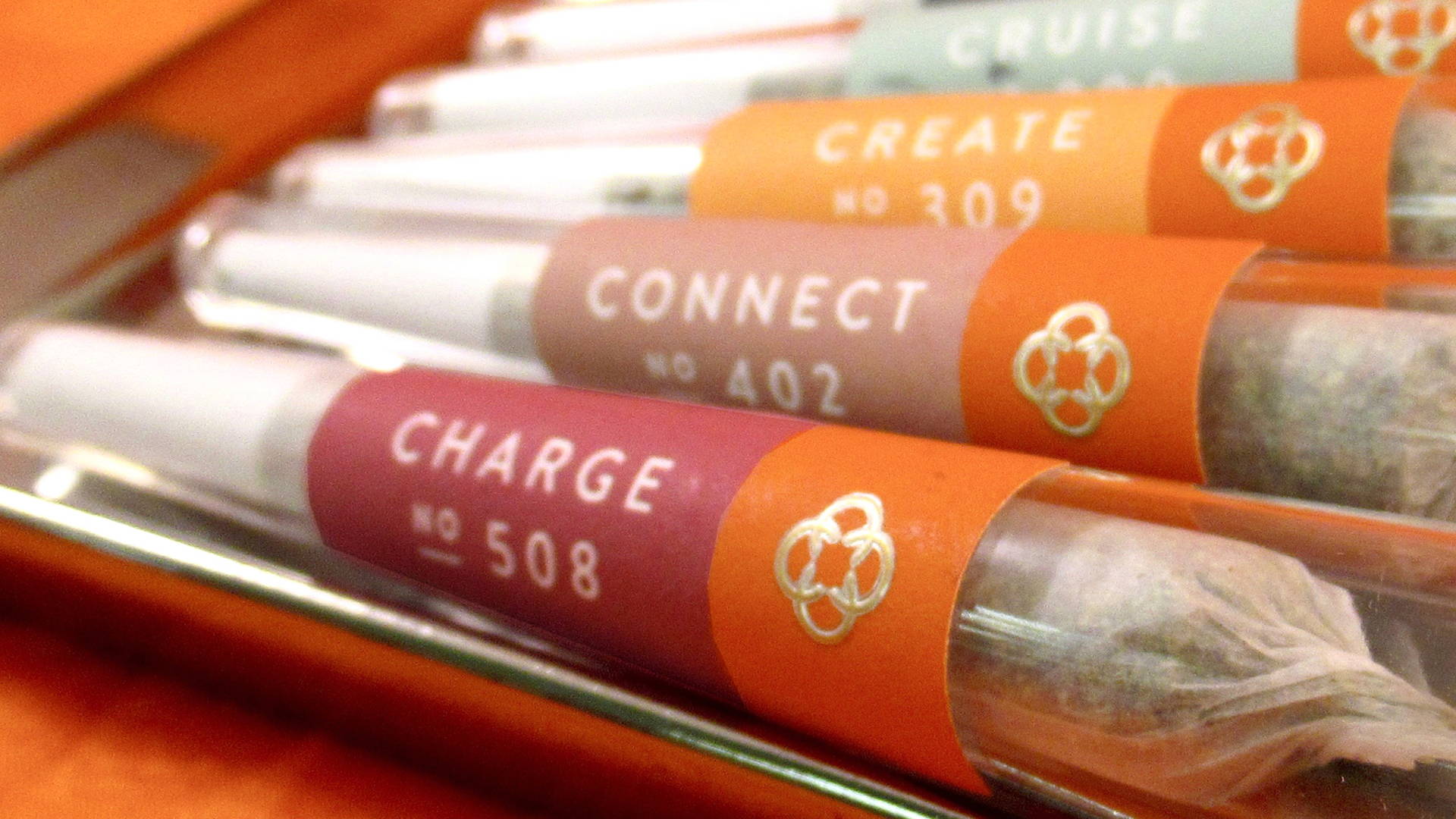 High-end Cannabis Cultivators Canndescent ask, “How Do You Want to Feel?”

If the topic of legalized cannabis came up at the last dinner party you went to, more than likely you didn’t talk about different strains like Lamb’s Bread, Lamb’s Breath, Lamb’s Beard, Leg of Lamb, or Lambda Lambda Lambda—and that’s just the lambs. Your conversation probably gravitated towards the effects of cannabis. This one helps me sleep. This one helps me get shit done. This one gives me a much-needed boost of energy before a workout.

OK, we still can’t really believe that last one, but there are plenty of folks that do.

The point is, legalized cannabis has moved out of the dorm room and is looking for more respectable, high-end trappings. Tucked away in Desert Hot Springs, California, you’ll find Canndescent, and they want to change the entire user experience built around cannabis.

“What we set out to do here,” says Founder and CEO Adrian Sedlin, “is create an accessible brand that’s highly relatable and aspirational at the same time.”

Canndescent is the first cultivator of their kind to completely do away with strain names and focus on the effects. Stressed out? Try Calm No. 104. Looking to stimulate some added intimacy with your partner? There’s Connect No. 401. Want to put all of that questionable high school poetry of yours to song? There’s Create No. 302.

“We’re trying to be the cannabis company,” Canndescent Vice President Rick Fisher says, “that steps forward and asks how do you want to feel?” Recategorizing those strains into an effects-based architecture is central to the Canndescent experience, and it’s a nod to approachability for both experienced smokers that are looking for a high-end product and novices alike.

Part of that approachability is built into the package design. Gone are the blacklight wizard hats and dragons, replaced by a sophisticated box that recalls Tori Burch and Chanel, while also offering a carefully curated tasting profile—Charge No. 501 “powers your body and sharpens your mind for high energy times requiring a mental edge.” For Adrian and Rick, they knew that the entire imagery of the landscape needed to change.

“I’ve often described the typical imagery in this space,” Adrian explains, “as the offspring of Wu-Tang Clan and Duck Dynasty with a healthy dose of misogyny.”

He continues, “The idea of giving people design cues that trigger trust and quality, that’s part of what our experience is from the moment you see the box. It invites you in.” From the tasteful logo of a flower right on down to the silver foil featured on the box, all of the details are associated with high-end lifestyle imagery that denotes sophistication, simplicity, and even a little sexiness. As they recently put it, it’s as if "Hermes and Tiffany & Co. had a baby." That feeling of warmth and trust is essential to the growth of the brand as they choose to focus on the premium adult experience. Essentially, they’ve had to reframe an entire category that for Adrian, meant buying dime bags of weed in New York City’s Needle Park in the 70s and 80s—a far cry from his new venture as the CEO of a cannabis company.

While they sought the advice of a few branding agencies, Canndescent’s packaging was designed in-house. “When you’re trying to innovate in a category,” Adrian says, “it’s really hard to outsource it at that level. We tried some third-party agencies for package design along the way, but they just couldn’t get there. Ultimately, you have to do a super deep dive into the cannabis experience, understand what the user is trying to accomplish, and then see beyond that.”

But beyond creating an inviting product, the care and detail that has gone into their cannabis borders on the compulsive.

“We’ve adopted a whole series of standard operating procedures that govern our actions within the facility,” Rick says. “Our rooms are spotless and our technology is state of the art. We are coming at this from a different angle than what’s been traditionally pursued. We also have the luxury of not hiding in the basement being a fully permitted cultivation facility with our local municipality in Desert Hot Springs.”

Above all though, they constantly have the flower in mind. Canndescent has sworn off pesticides and despite not using them during the actual grow, they’re constantly testing their product for intrusive chemicals throughout the process while also maintaining their high microbial standards. There’s also a huge no-no when it comes to cultivation - they never touch the flower.

So why protect the flower? It’s pretty simple really. All of the good stuff, the trichomes, are found on the surface of that flower and it contains all of the beneficial aspects of the plant that consumers want. Plus, it’s incredibly fragile: if you knock it around or jostle it in any way, the trichomes will get broken off.

Because of this flower-first mentality, they package the cannabis in a heavy-duty glass jar which is additionally protected from the light by being placed in their ornate box. Most cannabis comes packaged in a mylar bag which can be easily flattened and looking at any one of those bags, you’ll notice that it’s dirty and typically covered with a film of resin. That dusty film and dirty appearance are those precious trichomes, and they’re sticking to the bag.

Cannabis, being the fickle plant that it is, is incredibly susceptible to environmental changes, so much so, that it can change the profile of any given strain. Because of this, Canndescent has dedicated themselves to making a consistent product across the board. Every time you smoke one of their products, it needs to be exactly the same experience every single time. Because the facility is controlled environment and the product is meticulously tested consistently throughout the grow, they can replicate their products with the utmost of precision.

“Pringles need to taste like Pringles,” Adrian says. “You can’t open up a tube of Pringles and get Ruffles. Consumers have expectations of the experience and no one is executing against consistency.”

Less clear however is how Attorney General Jeff Sessions and his Department of Justice will treat this billion dollar industry. With the passage of the Rohrabacher-Farr amendment in 2014, the DOJ was prohibited from spending federal funds meant to interfere with states that have legalized medicinal cannabis. Should that ban be lifted, federal raids could be looming on the horizon.

Adrian remains unphased. “Anyone can bear the wrath of the federal government,” he says. “The federal government knows Pandora is not going back into her box.” Nor is it a simple Republican versus Democrat issue, as this is the extremely rare issue that maintains bipartisan agreement. While the future of cannabis is largely unwritten, 40 states currently allow some form of legalized marijuana.

“In 30 years, we’ll look back at cannabis as having been the most important medical treatment advancement in our lifetime,” Adrian adds. “I don’t say that lightly.” Adrian and Rick look forward to more clinical trials being done. Anecdotally, there is plenty of evidence to suggest that cannabis can be used for a great number of maladies—it can control seizures and tremors, it can make you hungry or suppress your appetite, it can be helpful in treating both depression and PTSD, and it’s said to be beneficial when doled out for autoimmune disorders.

And that’s just the science-y tip of the iceberg. To hear Adrian tell it, not too far in the future: instead of bringing a nice bottle of Pinot Noir to a housewarming party, chances are you’ll bring them a nice selection of cannabis. See that cheeseboard over there next to the canapes with a smattering of doobage? The one sitting next to the brie and that crusty loaf of French bread? That’s the future. It will be as socially accepted as a mint julep on Derby morning.

Most importantly, it’s a journey that Adrian is ready for.

“I was on the varsity stoner team in High School,” he jokes. “I’ve been training for this my entire life.”

Inside the Studio: Robot Food