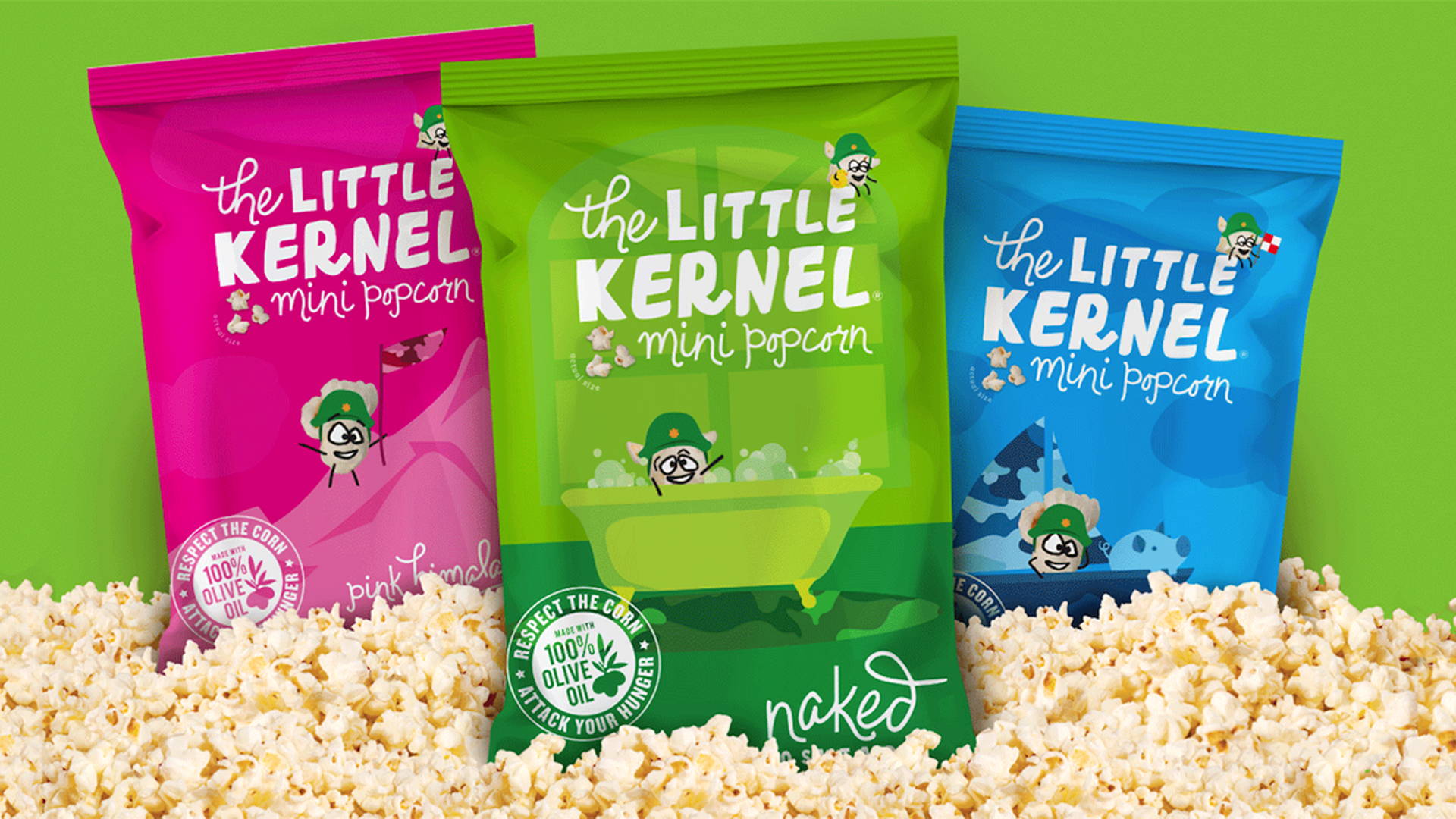 The Healthiest (and Cutest) Popcorn, Perfect for Kids and Adults

Little Kernel wants to know: which type of popcorn eater are you? Founded by Chris Laurita and Andrew Epstein (with packaging from Flood Creative), this is not just another popcorn brand—this is a special variety that gets popped in pure olive oil and doesn’t contain any mystery ingredients. Plus, a portion of the proceeds go to Generation Rescue, an organization that provides help to families affected by autism spectrum disorders. We spoke with Chris and Andrew about the adorable mascot Flood Creative made for the brand, how social media can play into your success as an entrepreneur, and selling products that support a cause.

Where did the idea for Little Kernel come from?

Chris and Andrew: We did extensive research in the marketplace and considered all different types of snacks, but we felt that the miniature popcorn was a natural for our kids—particularly Chris’s son who has autism and has to eat gluten free. The smaller kernels make it less of a choking hazard which is beneficial to his son as well as my 3 year-old daughter.

What sets this popcorn apart from other ones on the market, and how did you use branding and packaging to express that?

Chris and Andrew: For starters, it’s a miniature popcorn. An heirloom variety called lady finger and it’s popped in 100% pure olive oil. It’s made with ingredients that we are happy to feed our own families.  We think the packaging screams better for you while the name and the branding make it easy for the consumers to know what they are buying at first glance. 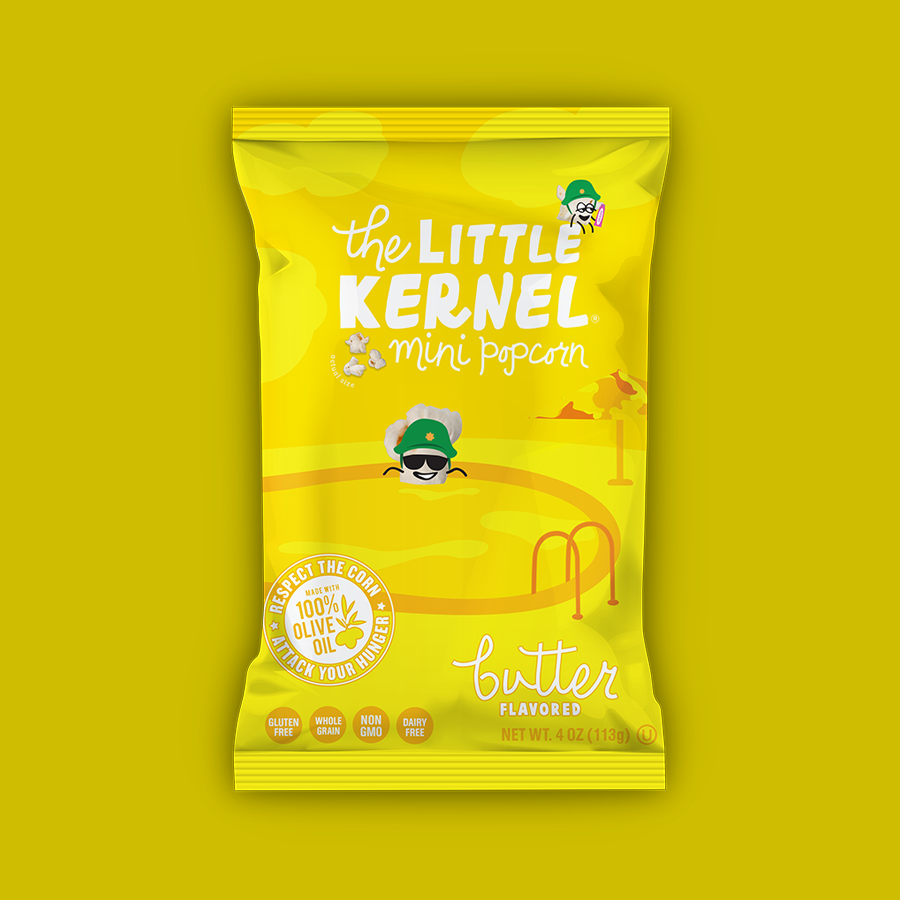 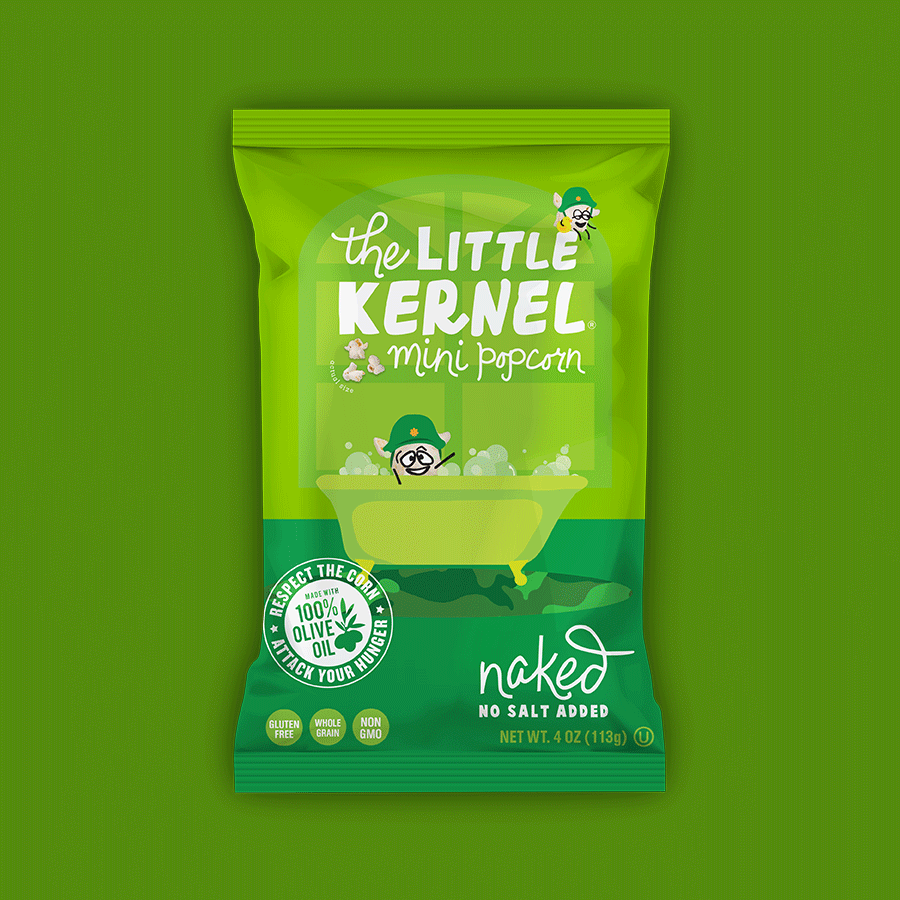 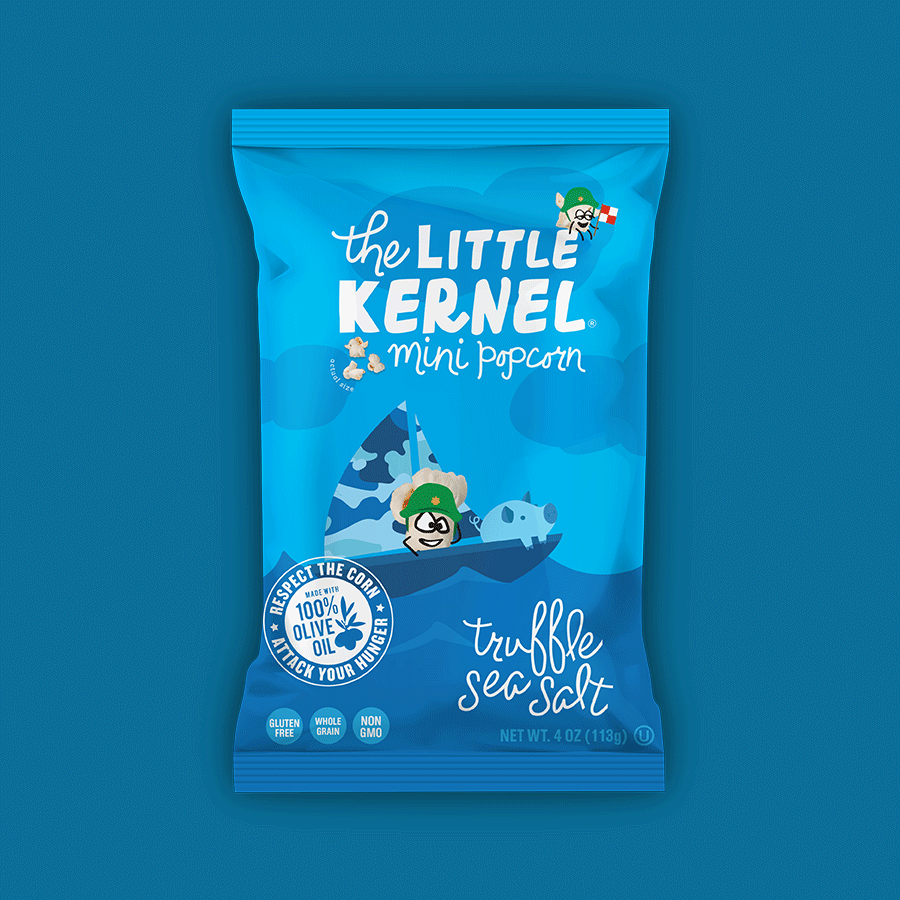 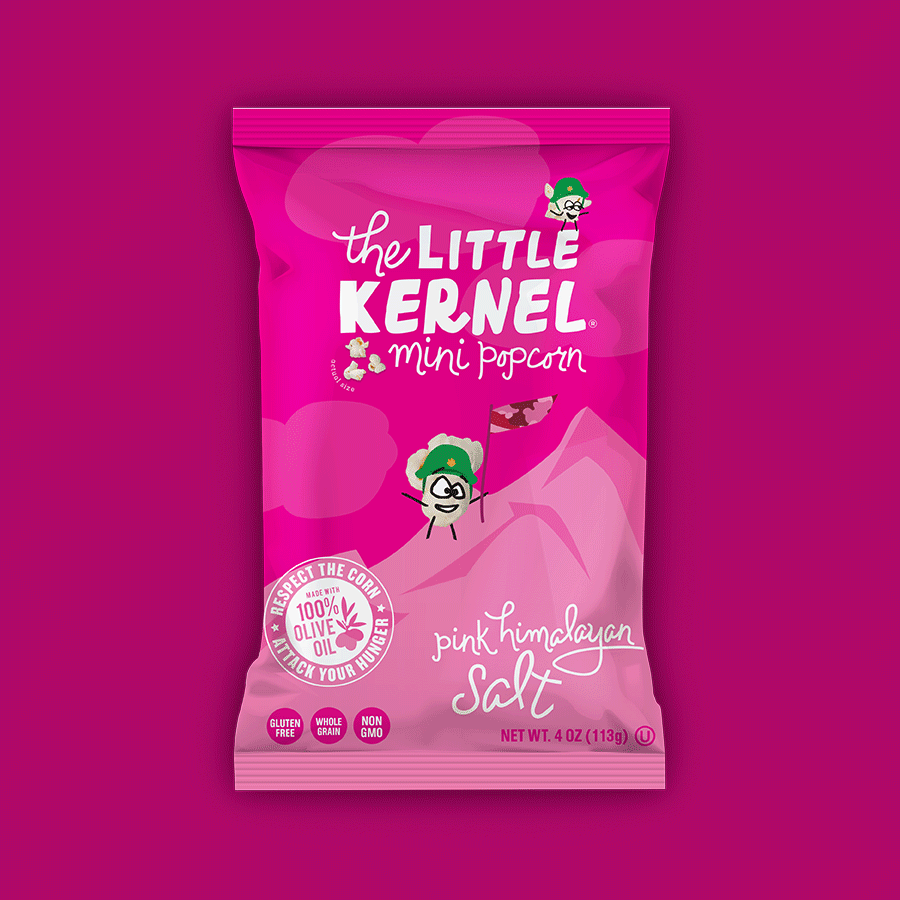 How did you decide on the adorable little kernel as your mascot? Who illustrated the Little Kernel and what direction did you give them to create him?

Chris and Andrew: We wanted a mascot of sorts and thought it would be a good idea to bring our little kernel to life. The play on words was too obvious to ignore. We challenged Flood creative with the task of creating the little guy, and they nailed it!

We love that you created a backstory for the mascot as well. Why was it important for him to have a personality, and how does this contribute to the consumer experience?

Chris and Andrew: We wanted him to be able to tell a story: to speak about his experiences traveling the world in order to find the best available ingredients. We felt that the consumers would connect with him and he has many fun things in store in the future. 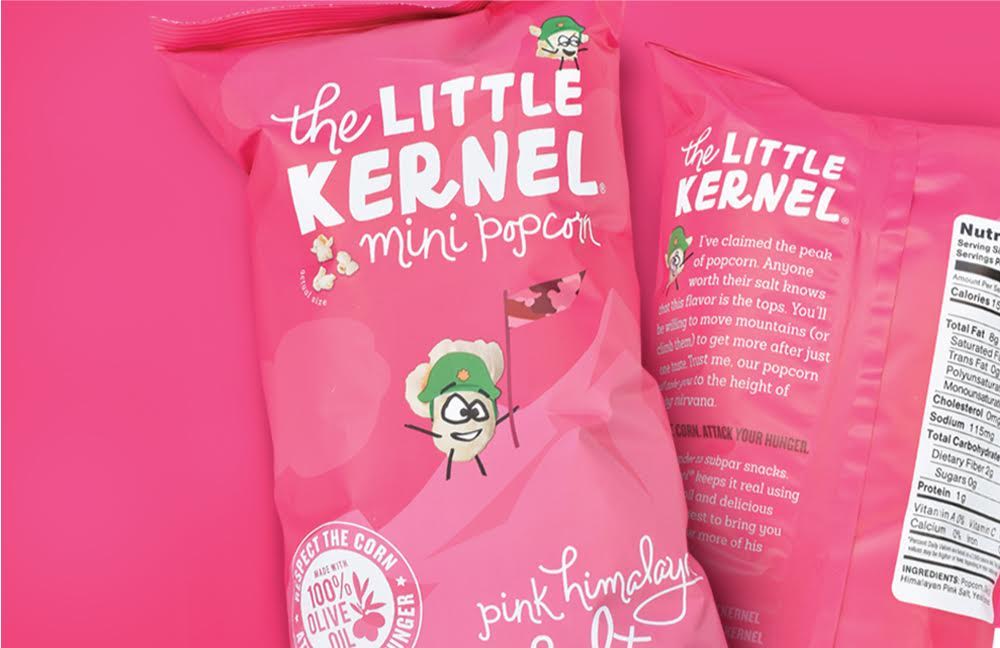 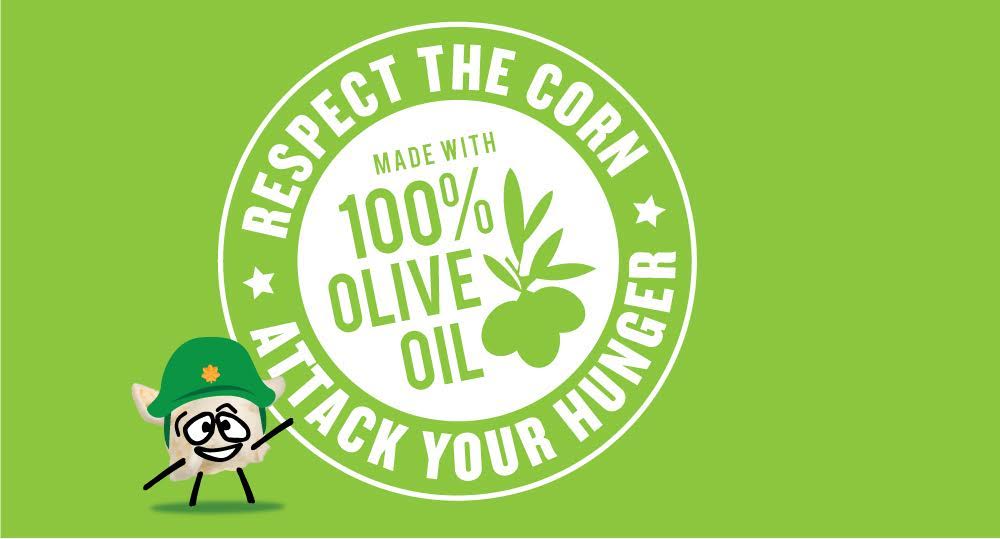 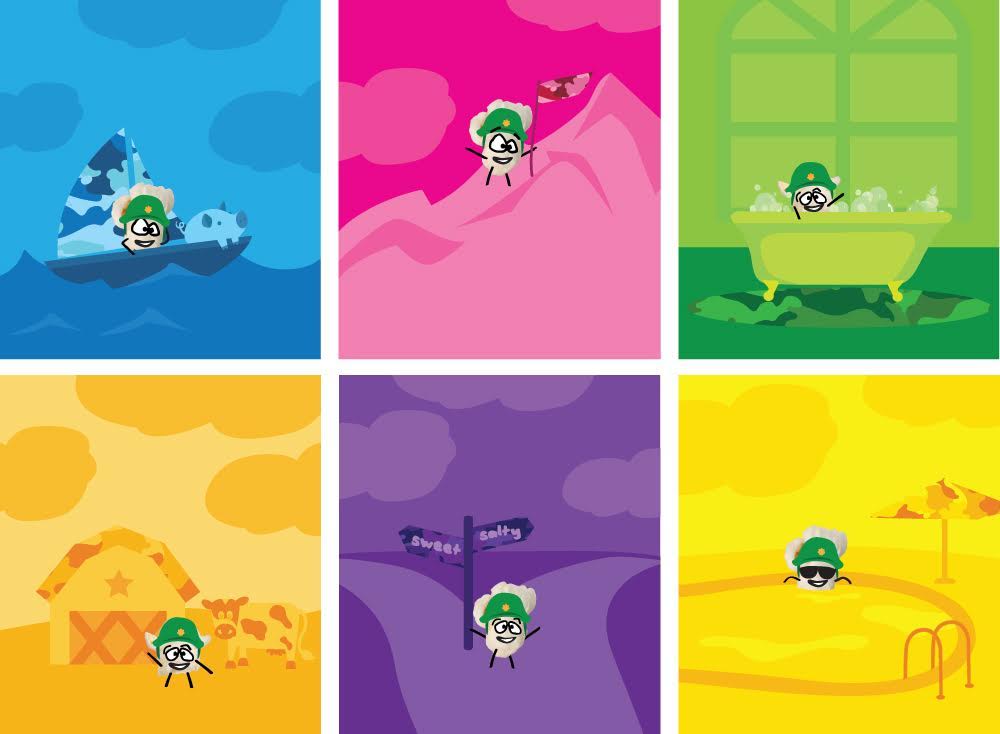 How did you strike a wonderful balance with packaging that appeals both to children and adults?

Chris and Andrew: We wanted the bags to jump off the shelves, thus the bright packaging. The addition of the kernel and the fact that he’s so dapper and cute draws the attention of young and older alike.

What role has social media played in the success of Little Kernel? What advice would you have to other entrepreneurs looking to use social media to their advantage?

Chris and Andrew: Social Media is huge. People interact with other customers and potential customers, in turn building the reach and creating demand. Consumers begin to request the products at store level creating a demand-pull scenario. It’s billboards, commercials, and word of mouth on steroids all rolled up in one. When I see mature brands or startups and social media isn’t at the top of their priority list, I feel that they are ill-prepared to sell the millennials, who will one day be the majority consumer.

What were the biggest challenges you faced in getting Little Kernel to became a physical product on the shelf?

Chris and Andrew: Nothing out of the ordinary. It was all just very time consuming.  I felt like Sam Breakstone, the character in the breakstone commercials of the 80s.  He was always cranky and demanded that his products had to be the best. I believe he’d yell, “Not thick enough!” That was us!

If you could go back to the start of this project and do anything differently, what would you want to change?

Chris and Andrew: Absolutely nothing. We definitely made some mistakes and there was a learning curve but a good education always costs money. We learned a lot!

For example, we were rushing to get the product ready for expo west and we misjudged the size of the bag. We ultimately had to throw them all away and re-order them, but this time 1.5" taller. It was a $60k mistake. I think ultimately you can’t rush the process, and you need to double check rather than assume. We could have probably avoided the problem if we didn’t rush. Slow and easy always wins the race. 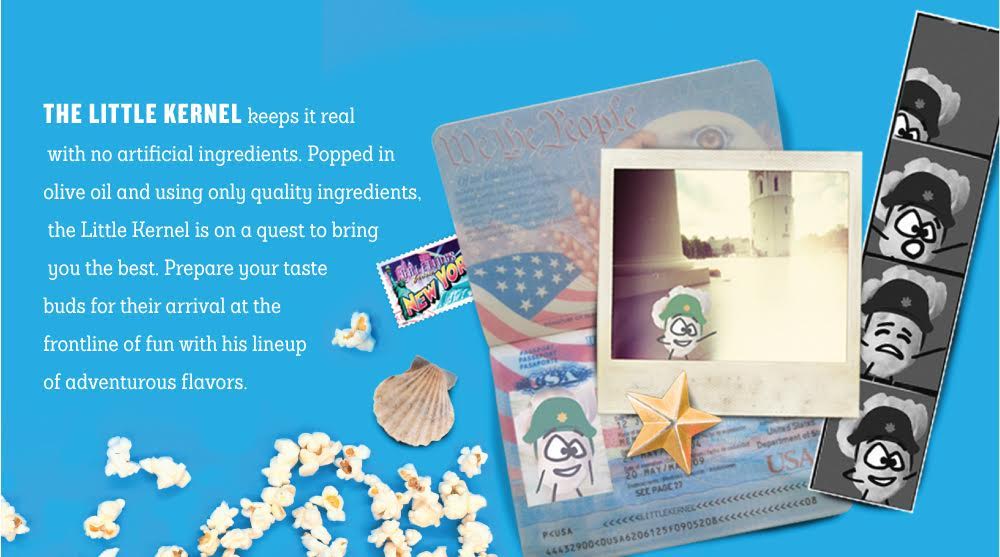 Tell us more about Generation Rescue and why you decided to give a portion of your proceeds to them.

Chris and Andrew: Chris and I are very philanthropic. We chose Generation Rescue because Chris has a son with Autism and already donates much of his time speaking at conferences and events on their behalf in order to raise awareness and funds. It was a natural choice

What’s in store for the future of Little Kernel?

Chris and Andrew: We have many exciting things planned including the launch of our new S’mores flavor! We are also gearing up right now for a big media push in April which is Autism awareness month. 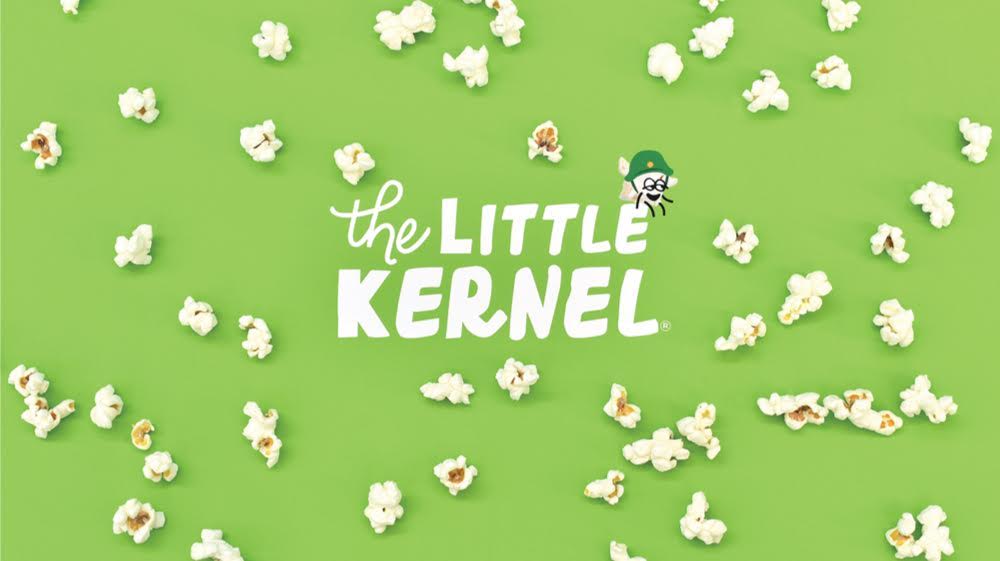 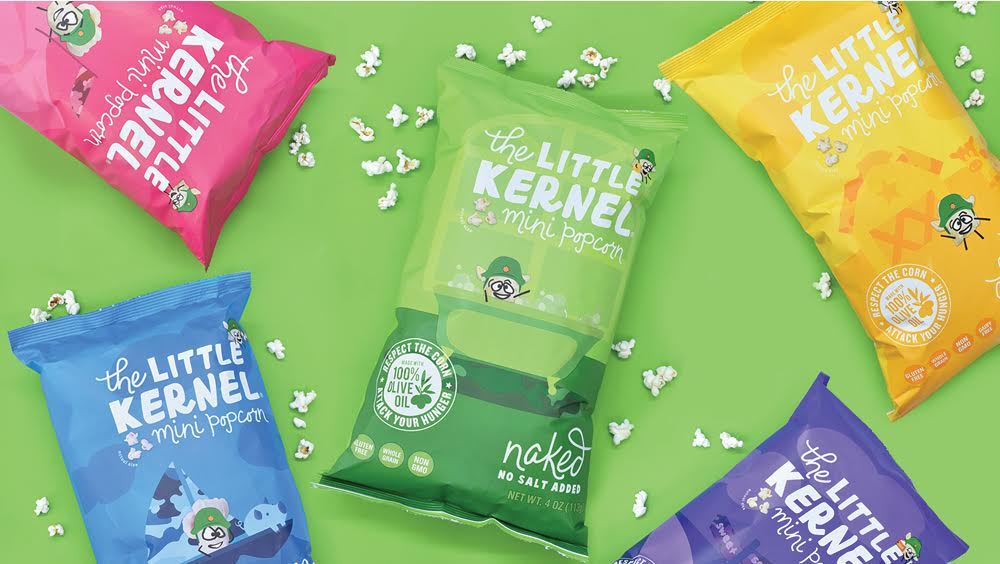 How Do You Continue to Sharpen Your Skills as a Designer?