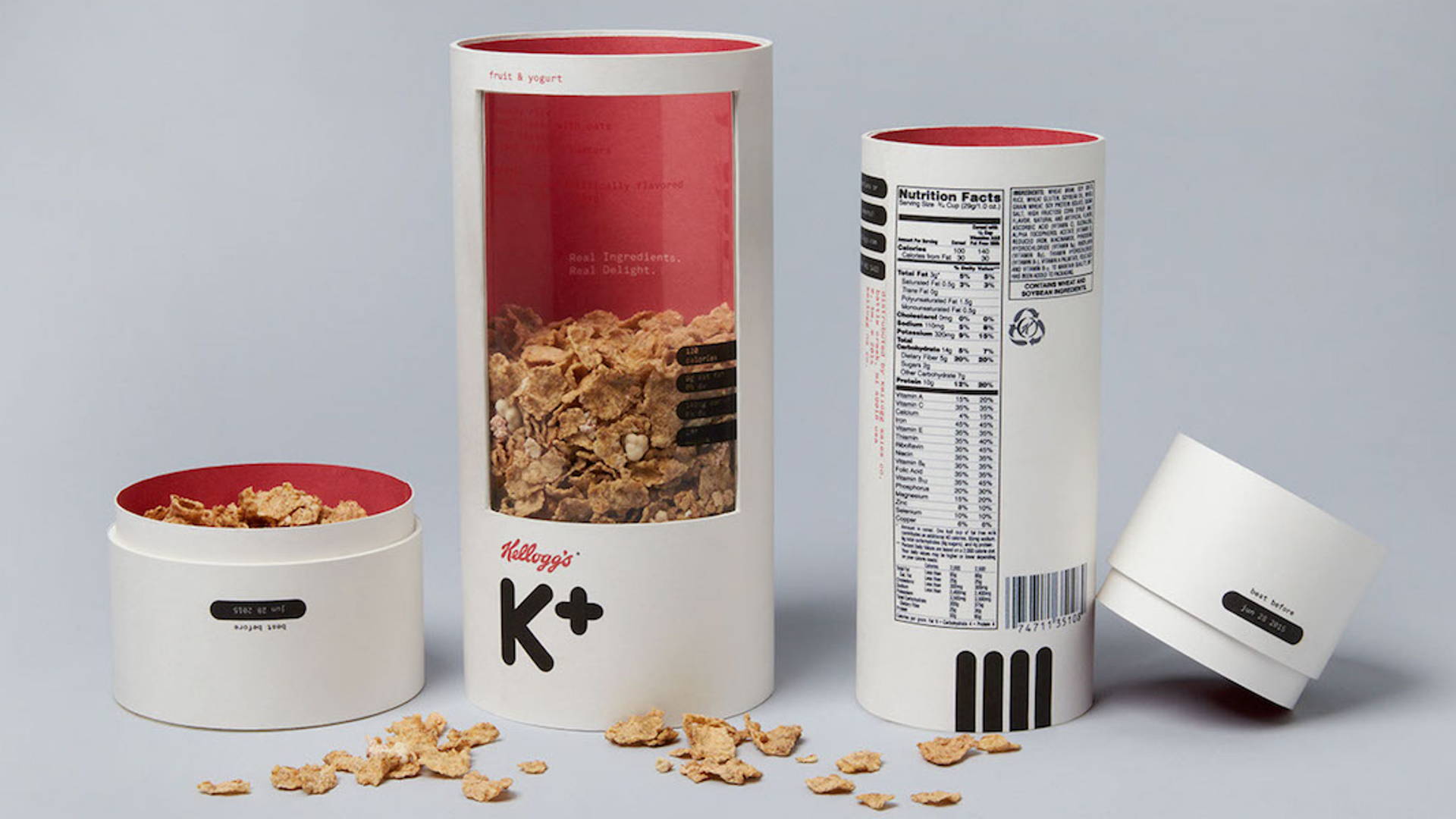 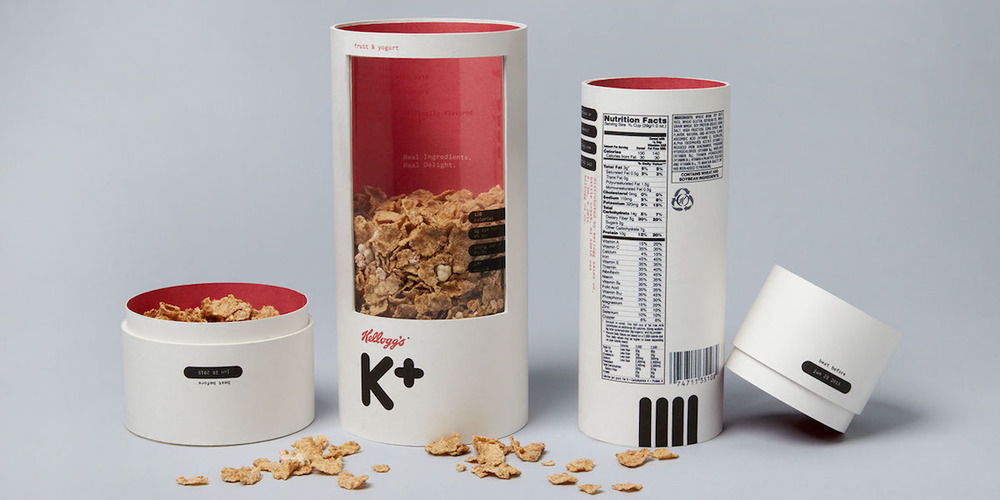 I have a cousin who, growing up, ate only Lucky Charms cereal for breakfast every single day. Sometimes I wonder if that unique diet followed him into adulthood. Of course, it would probably still be his breakfast of choice if Mun Joo Jane had designed the packaging. Jane created a concept for Kellog’s Special K with the goal to create something not for children, but for adults. Going above and beyond the typical cereal box, she took two different ideas to create two separate and unique designs. 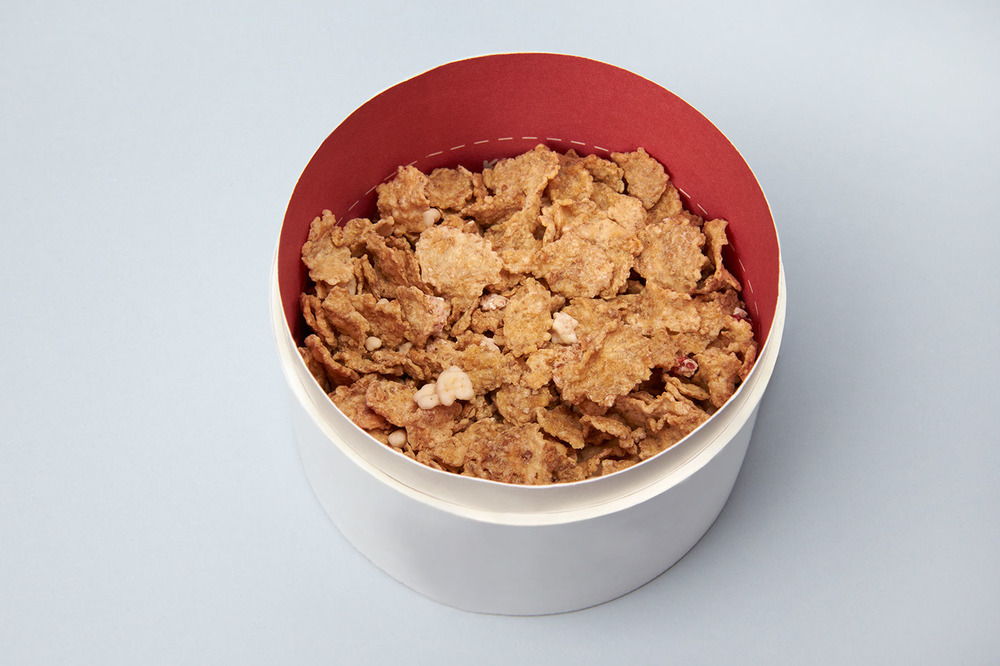 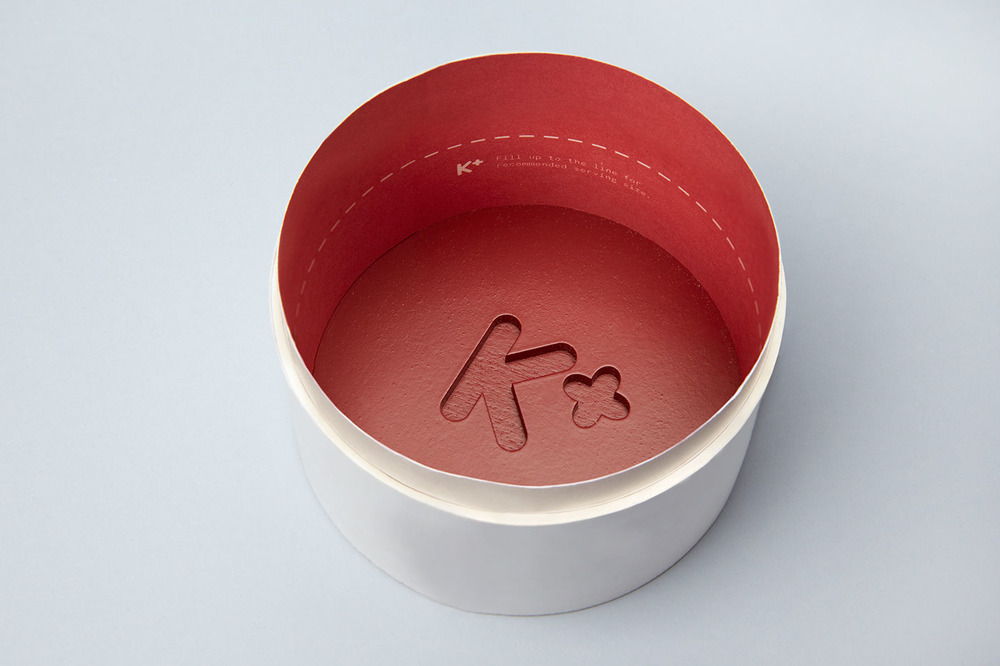 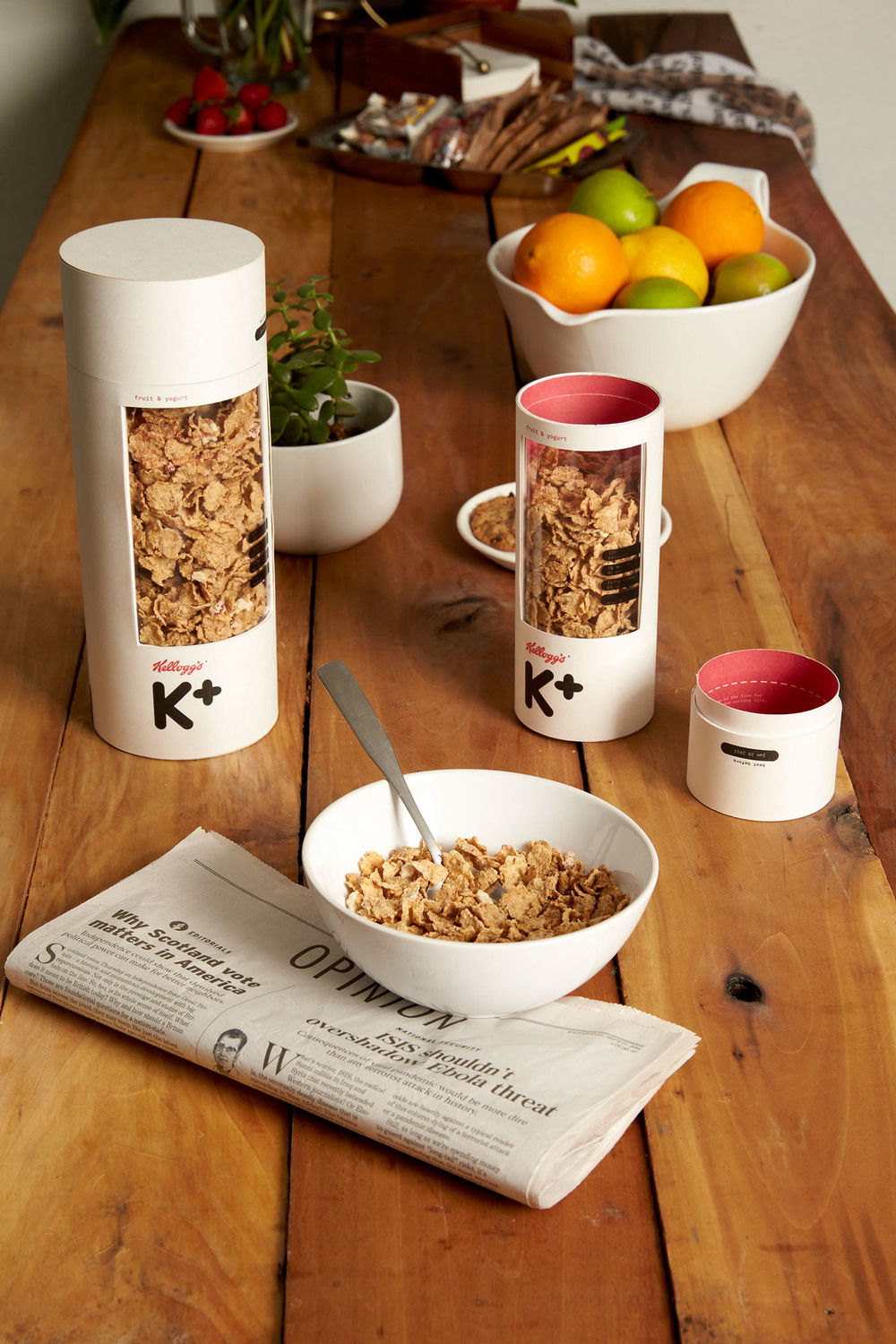 “The font used for the first project is made carefully with geometric forms. The Kellogg’s logo must be on top of the logo so that the logo shows contrast. As you can see in the smaller version of the logo, the logo is strongly identifiable. The first concept is more for the high-end consumers. It is designed with a measuring cup for recommend serving size inside the cap of the cereal.” 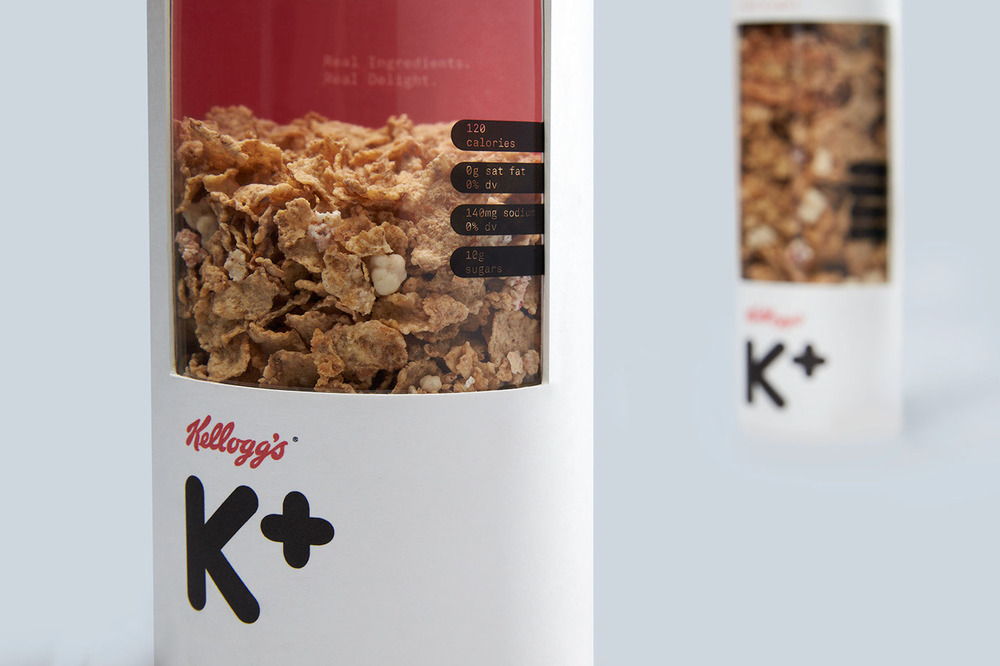 This first packaging, a cylindrical shape, looks like a futuristic capsule of cereal. The sleek design has the Kellog’s logo but looks completely revolutionary. Being able to see inside and look at the cereal is a valuable tool to consumers who appreciate seeing the quality of their food before they purchase it. Black bars with rounded ends provide valuable information, like nutrition facts and the expiration date. The cap, which doubles as a measuring cup, makes use of the shape of the container and also solve a problem many consumers may not have even realized they had. 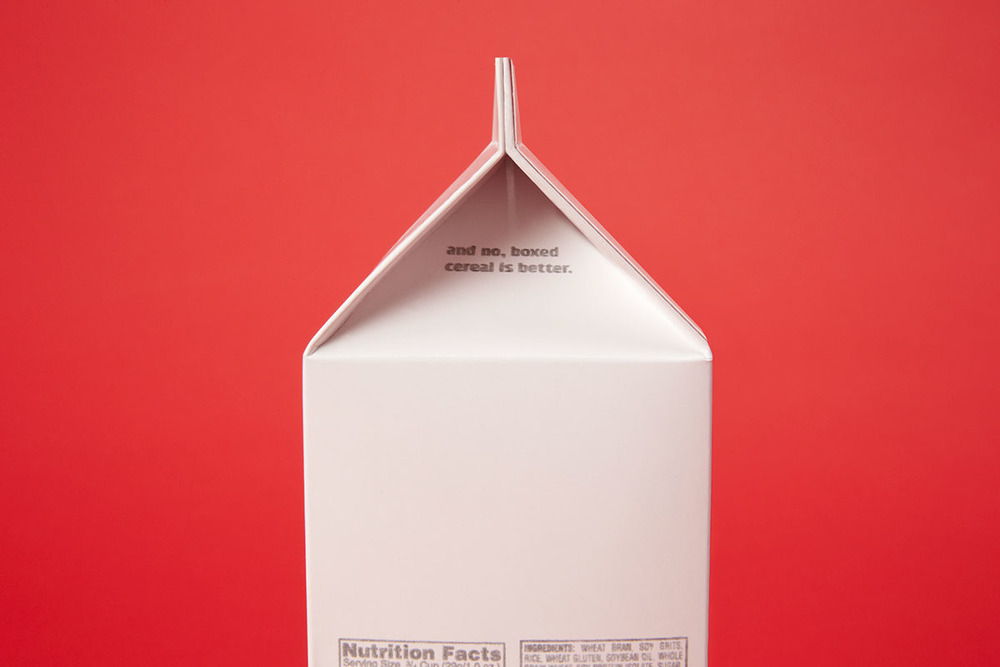 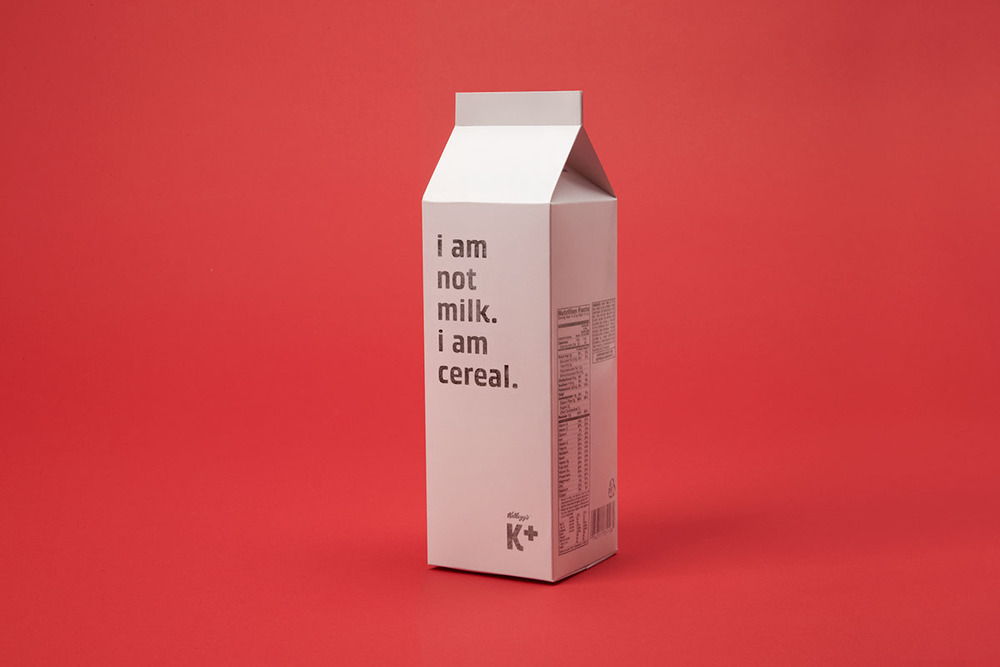 The second design utilizes a traditional milk carton, making connections between what cereal is most often paired with. Minimal and clean, the packaging is mostly white with no images and text only. “i am not milk. i am cereal.” This is a bold statement that further emphasizes the fact that these are cereals created for adults. 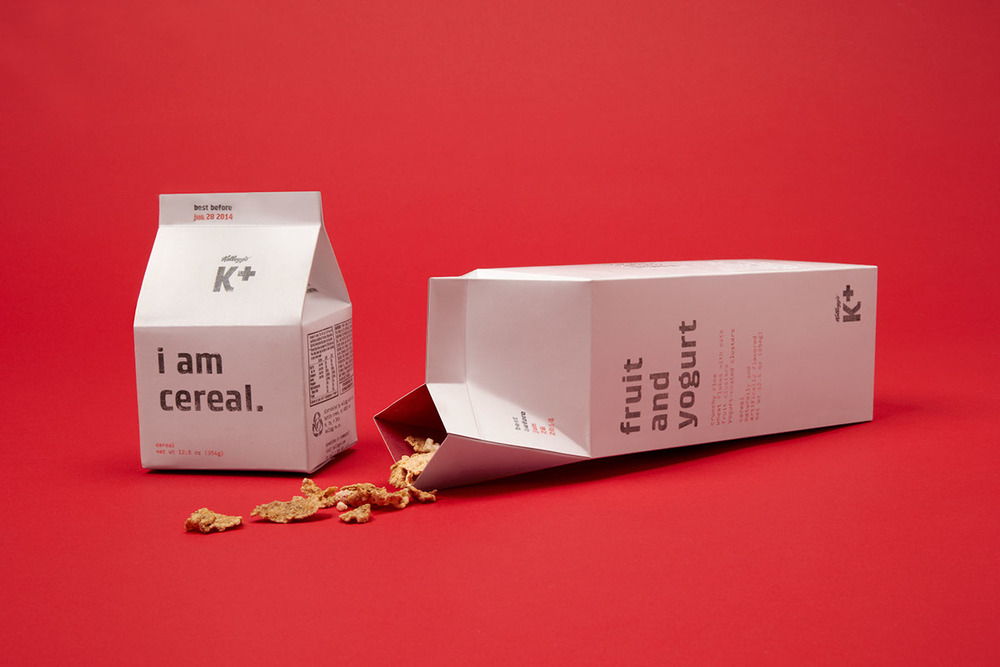 “This logo is used for the milk carton cereal. The font is made with the typeface Kabel. Kabel has the slick feeling like as if liquid is flowing. The plus sign is the same size as thickness of the stem of the K. The Kellogg’s logo must be used in the context of black and white. Because both designs had potential, This second design is the fun side of Kellogg’s K+. It is in a milk carton that says ‘I am not milk. I am cereal.’ It is a charming and friendly.” 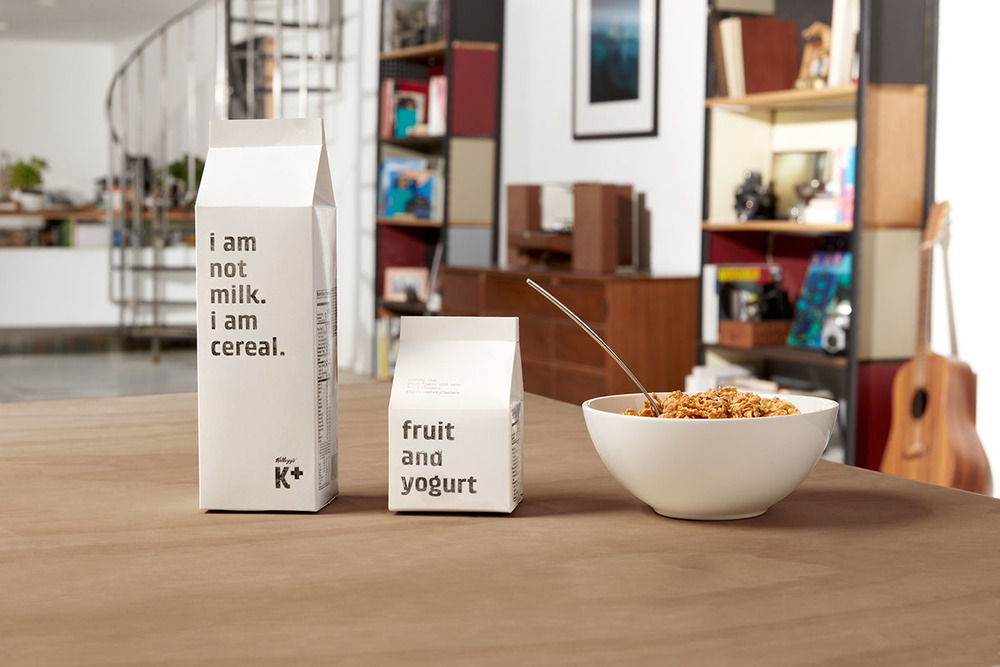