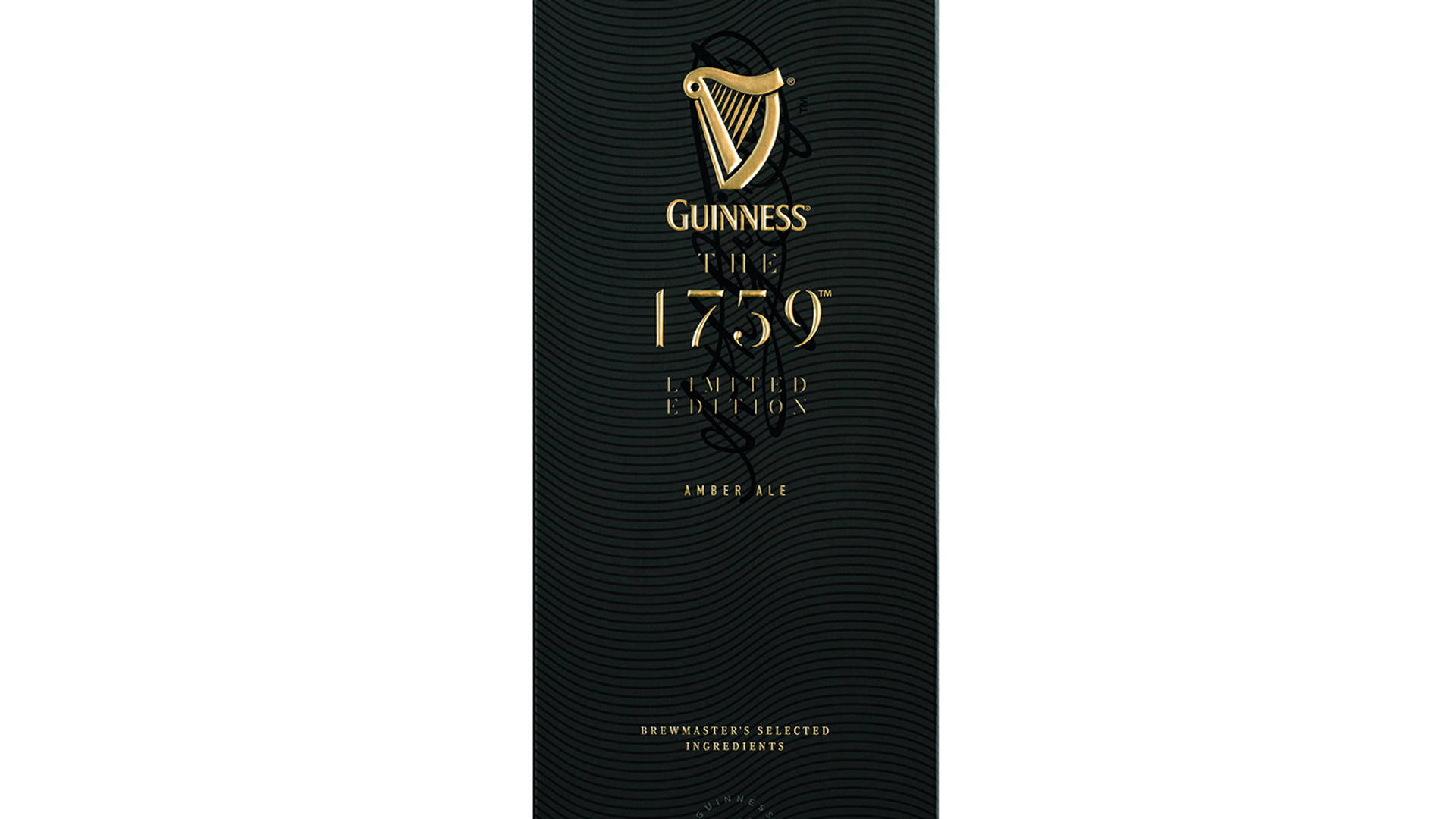 Guinness® is combing elegance and beer with Guinness® The 1759™. This limited edition and ultra-premium beer is bringing artistry to the beer category with this distinctive bottle and ultra sleek design.

"Just in time for the holiday season, the world’s most distinctive brewer is bringing a new level of elegance and artistry to the beer category. Guinness & Co. – brewers of the iconic stout – introduces its newest innovation, Guinness® The 1759™, a limited edition amber ale brewed to be sipped responsibly with satisfaction, savored as part of fine dining and gifted with appreciation by beer connoisseurs and enthusiasts alike."

"Guinness® The 1759™ is an ultra-premium beer brewed with both traditional beer malt and the same peated whisky malt used in the world’s finest Scotch and Irish whiskies. Inspired by a 200 year old recipe and brewed with the same Guinness yeast that has been used for more than 125 years, this rich amber ale offers new style and flavor under the Guinness trademark. Using the mastery that comes from more than 250 years of brewing experience, the Guinness Master Brewers have created a beer unlike any other European import on the market." 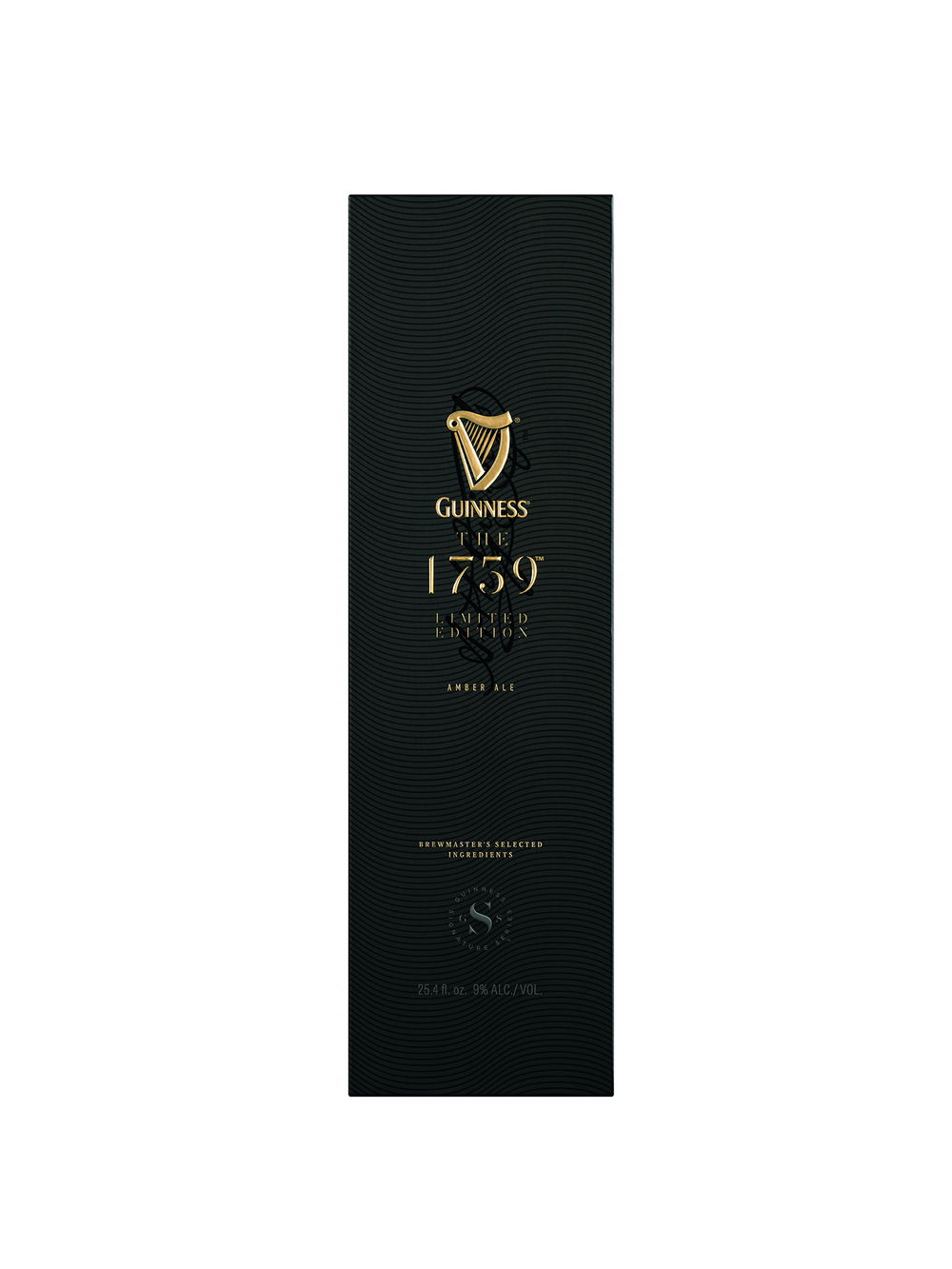 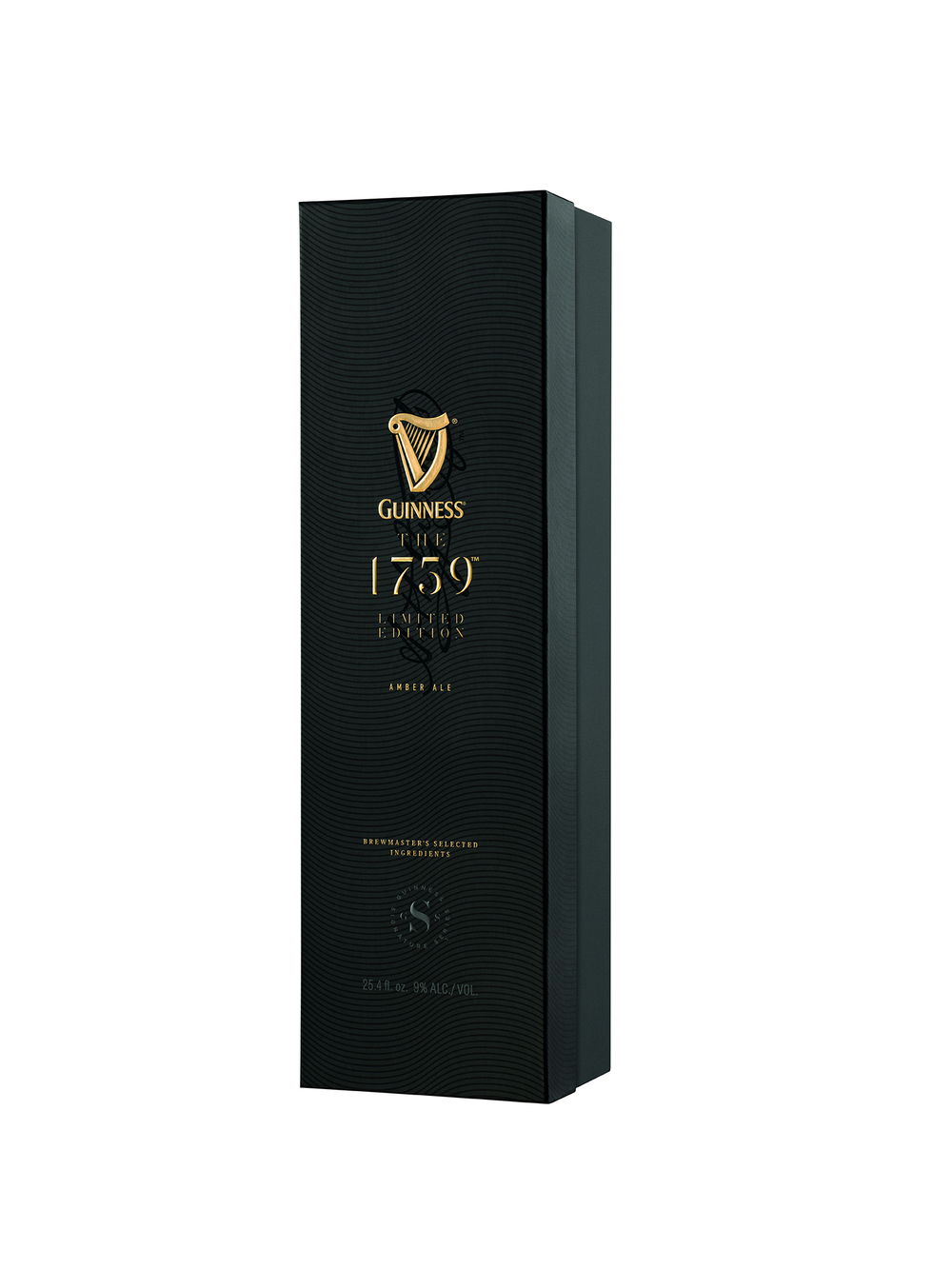 "With only 90,000 bottles being produced, the commemorative release of Guinness® The 1759TM is a chance to be part of Guinness’ brewing history. The name is derived from the year Arthur Guinness signed the 9,000 year old lease at St. James’s Gate in Dublin so he could brew what would become one of the most respected and beloved beer brands in the world.

“This is the first limited edition beer brewed in the newly dedicated Brewhouse No. 4 at St. James’s Gate. Our commitment and dedication to quality is what Arthur Guinness himself would have expected and something we cherish just as he did,” said Michael Donnelly, Master Brewer at St. James’s Gate in Dublin. “The fine peated whisky malt used in the Guinness® The 1759TM brewing process brings a complex taste to the amber ale that gently complements the hop flavors, resulting in a liquid that is distinguished and innately Guinness.”

Guinness® The 1759TM has a rich butterscotch aroma with subtle hop notes. The mellow, caramel flavors combine with a subtle hop character and fruity sweetness from the strong ester profile. Available in a 25.4 oz. bottle (9% ABV) –  approximately 4 servings –  with a suggested retail price of $34.99, Guinness® The 1759TM is best enjoyed chilled in a 6 oz. stemless champagne flute. Guinness® The 1759TM will be available in select bars, online at www.reservebar.com as well as other beer retailers beginning in late October 2014.

About Guinness®The Guinness® brand enjoys a global reputation as a uniquely authentic beer and the best-selling stout in the world.  Famous for its dark color, creamy head and unique surge and settle, this distinctive beer originated at the St. James’s Gate brewery in Dublin, Ireland. Over 10 million glasses of Guinness beer are enjoyed every single day around the world, and 1.8 billion pints are sold every year.  Guinness beer is available in well over 100 countries worldwide and is brewed in almost 50. Additional information about the Guinness brand can be found at www.guinness.com.

About Diageo Diageo is a global leader in beverage alcohol with an outstanding collection of brands across spirits, beer and wine categories.  These brands include Johnnie Walker, Crown Royal, J?B, Buchanan’s, Windsor and Bushmills whiskies, Smirnoff, Cîroc and Ketel One vodkas, Captain Morgan, Baileys, Don Julio, Tanqueray and Guinness.

Diageo is a global company, and our products are sold in more than 180 countries around the world.  The company is listed on both the London Stock Exchange (DGE) and the New York Stock Exchange (DEO).  For more information about Diageo, our people, our brands, and performance, visit us at www.diageo.com.  Visit Diageo’s global responsible drinking resource, www.DRINKiQ.com, for information, initiatives, and ways to share best practice.