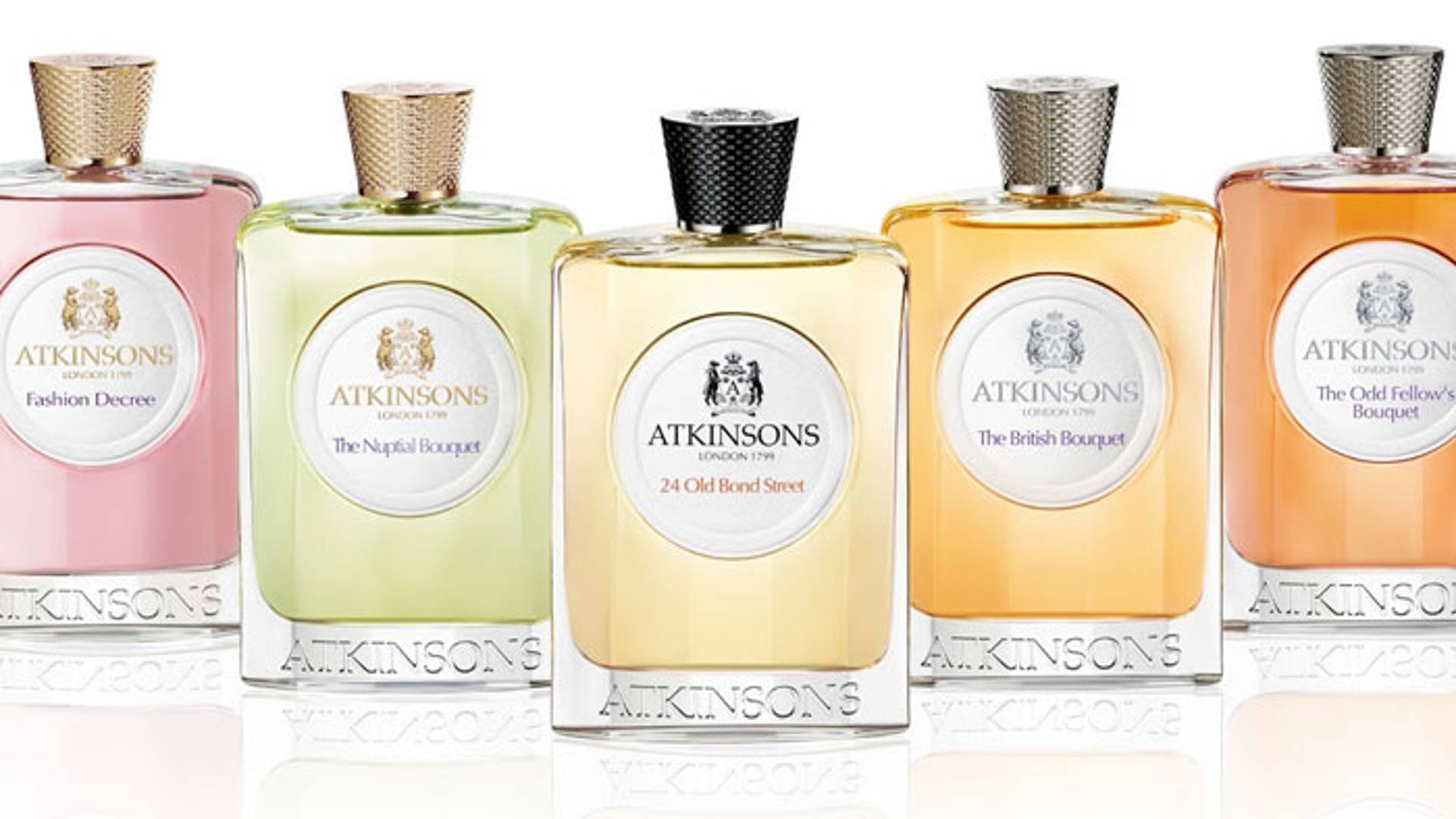 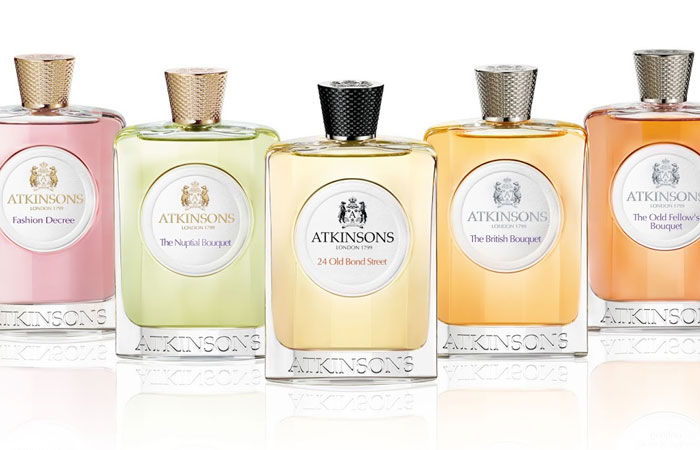 After two years in the making, French Agency - Aesthete proudly presents a rebirth of a sleepy one, Atkinsons. Atkinsons is a 18th century house with a strong heritage and history rich in symbols. Aesthete gave the brand a contemporary reading accompanied with a touch of tradition and british eccentricity. They plunged in the history and the archives of the brand to release the fundamental codes which constitute its DNA, bring the brand to the 21st century, and celebrate "200 years of Perfume Snobbery"

"At end of 18th century, James Atkinson, the founder, showed his bear to sell his renowned perfumed balms in London.The bear thus had to be at the heart of the story of the brand to extend in Sir Atkinson's soul."

The new logotype of the brand was associated with a blazon containing the bear Atkinsons, as well as the flowers of the county of Cumberland, birthplace of the Atkinson family. The design of this blazon was realized in the pure heraldic tradition. The blazon also doubles as a signature on all products as a seal.

"The bottle was inspired by an old Atkinsons flask - some of which were totally covered with canework in the19th century. Thierry de Baschmakoff chose to use the motive only in touch to bring modernity and refinement. The canework is engraved on the cap and embossed on the packagings.The bottle was also revisited to allow a journey in time without however denying the origins of the brand. The paper packages are a balance between tradition and modernity. The structure is similar to a cabinet drawer (with a fabric tab to pull out). The boxes come in two lively and recognizable colors, orange and midnight blue (Atkinsons' two corporate colors) and embossed with 'canework' texture. "

Aesthete also designed the merchandising universe and the pop up store, special event place for new launches. For that purpose, we redesigned the facade of the Atkinsons Bond Street building by adopting an 'architect ancient drawing' treatment, and used this graphics to cover the facades of the pop-up store. The inside plays with the mixture of genres by associating exhibition of parts of the Atkinsons museum way cabinet of curiosities, orange Chesterfield armchairs, and modern lacquering. A purely English style." 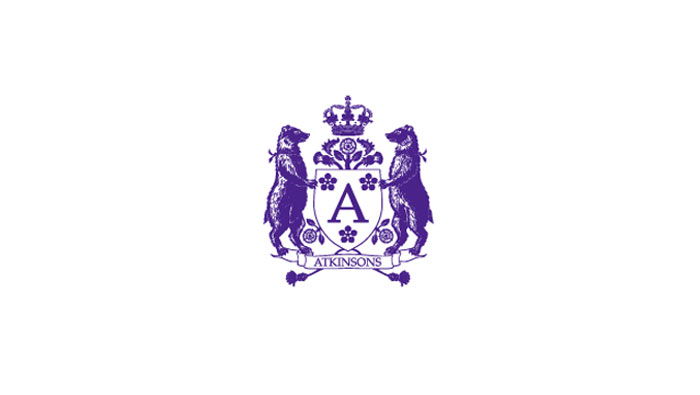 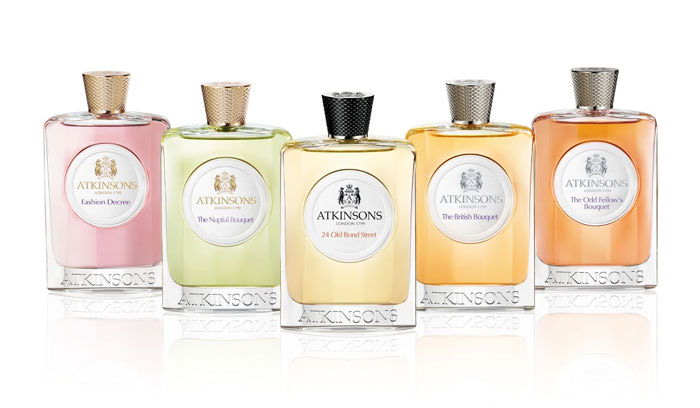 "The emblematic fragrance of the house, 24 Old Bond Street is an extremely English cologne of tremendous personality.

Its devastatingly aromatic cocktail of juniper, rose and black tea is deepened with a gorgeously eccentric note of smoky, oak casked whisky. Bracingly fresh yet warmly embracing, it is the definitive last word in English elegance." 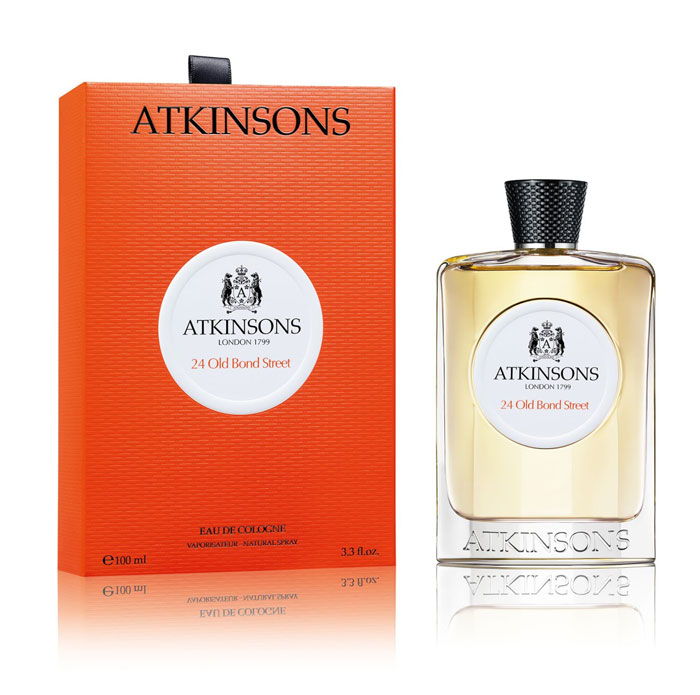 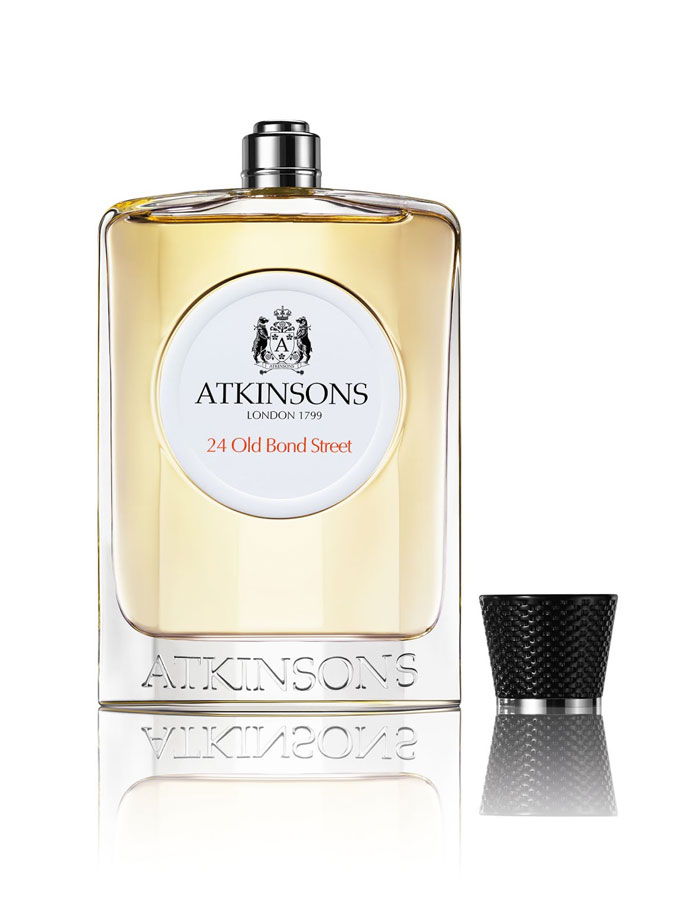 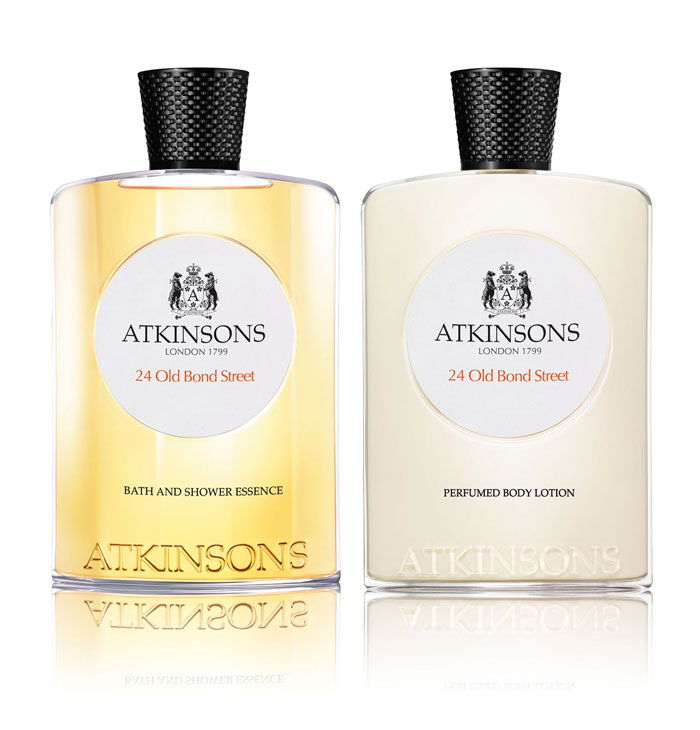 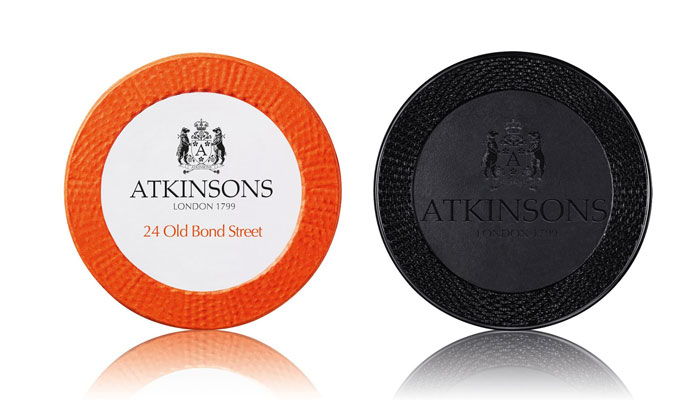 "Pink Peppercorn - Chinese Magnolia - Patchouli  Fashion decree summons up a time when precious silk brocades, arriving from the Far East in trunks packed with patchouli leaves, were all the rage at the court of Queen Victoria. An opulent patchouli perfume of far-flung origins. A fragrance for exquisitely dressed women with a passion for luxury." 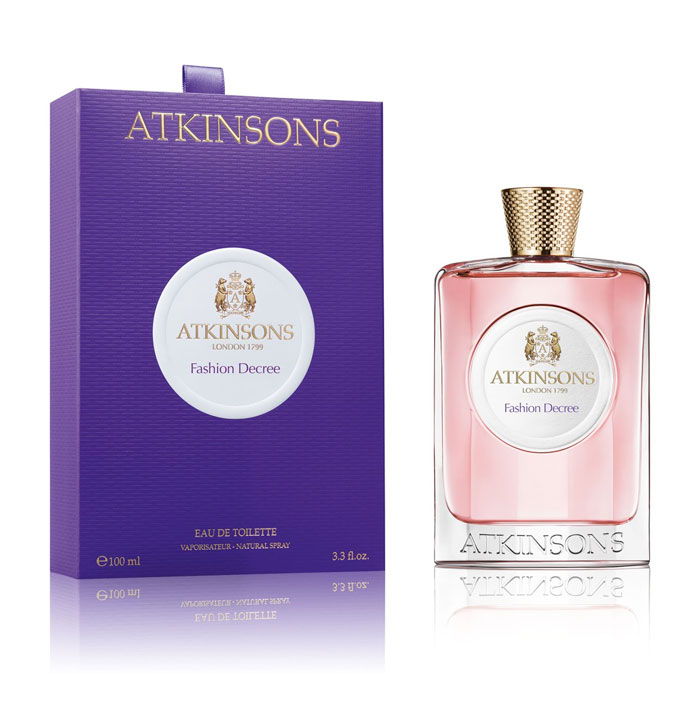 "Myrtle flower & Violet Leaves - Lily of the Valley - White Sandalwood  A fragrance for royal romance, a retro contemporary interpretation of the Queen Victoria's bridal bouquet: the green and white loveliness of lily of the Valley, violet leaves and exquisite myrtle flowers enhanced with delicate white musk and sandalwood.

For women who wouldn't dream of settling for less than a prince." 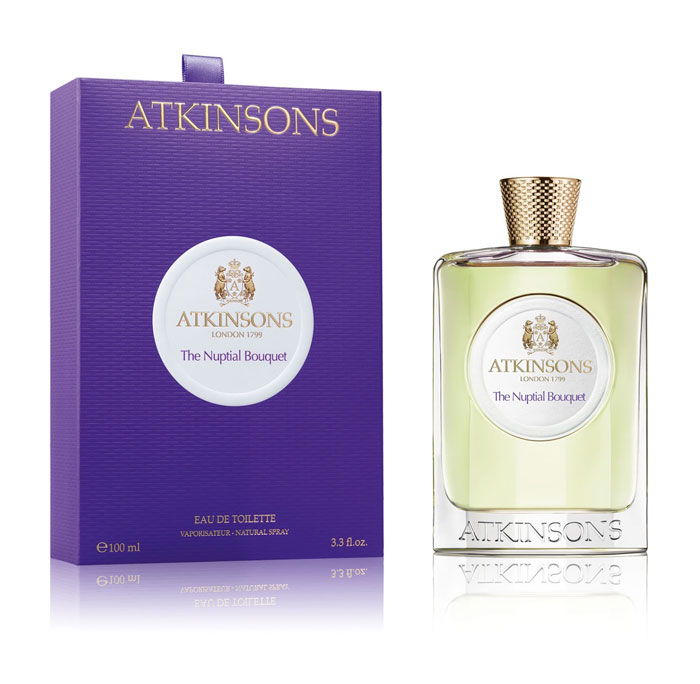 "Bitter Orange & Citrus Caviar Lavender - Leather Accord  An olfactory ode to dandyism, The British Bouquet is to be worn like the finest suit of bespoke tailoring, with Beau Brummel confidence and panache. For ladies and dandies, a veritable mist of the Isles inspired by Beau Brummel, intrepid pioneer of the 3-piece suit, and the model of the man who was born with a wisecrack on his lips and an eye for knockout sartorial elegance. Woven from velvety lavender, myrtle and malt, and lined with gilded citrus top notes of bitter orange and caviar lemon, The British Bouquet is impeccably finished with a leather accord that recalls the champagne-polished hessian boots of the dandy himself." 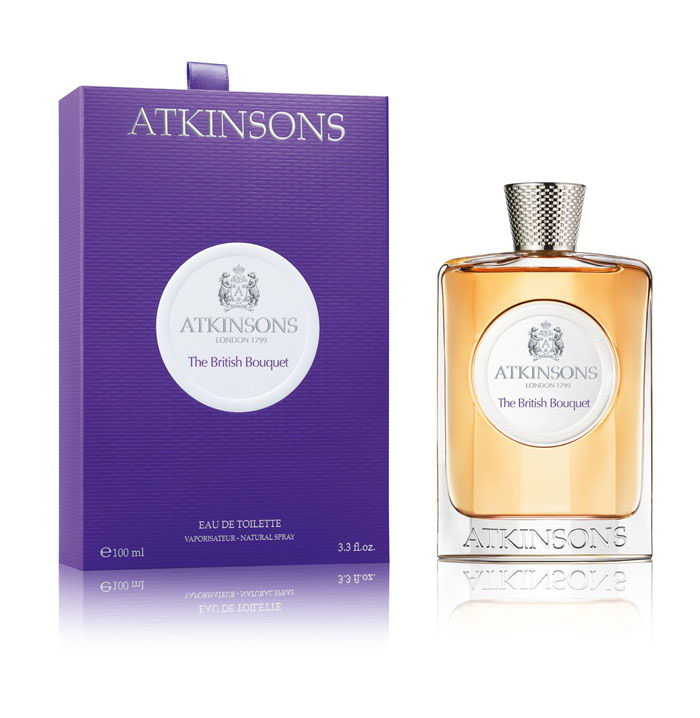 "Ginger - Heliotrope & Oriental Tobacco Accord - Labdanum The grand return of Lawrence of Arabia to the fireside luxuries of London's most storied gentleman's club. Lawrence of Arabia ensconced in the splendour and leather Chesterfield comfort of a St. James gentleman's club, its weighty silence broken only by the occasional turning of a sheet of a newspaper, and the Oriental fragrance of Ottoman tobacco issuing from the depths of fearsomely upholstered winged armchairs. This rarified ambience is conveyed with almondy heliotrope flowers and dark tobacco, heightened with ginger and fiery peppercorn and, finally, deepened with a rich ambery accord of benzoin and labdanum.

A fragrance of immense leisure." 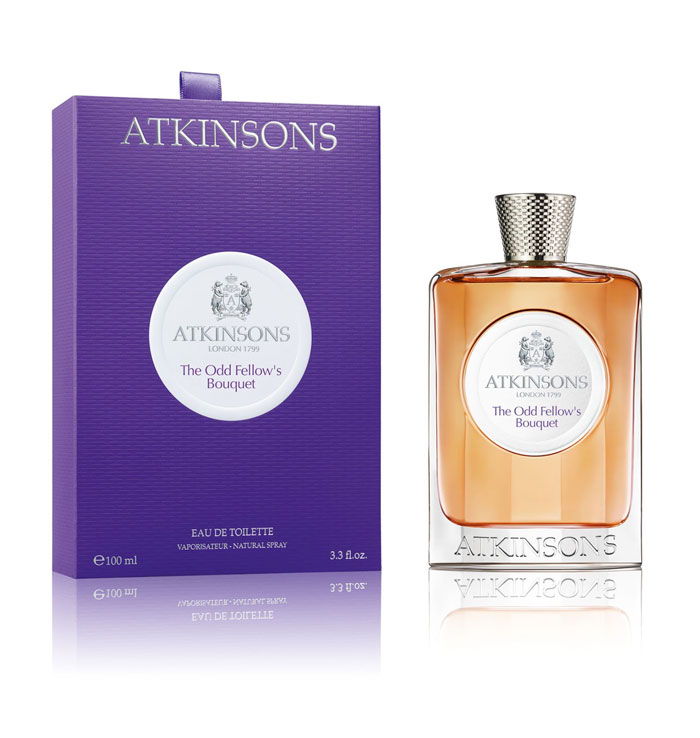 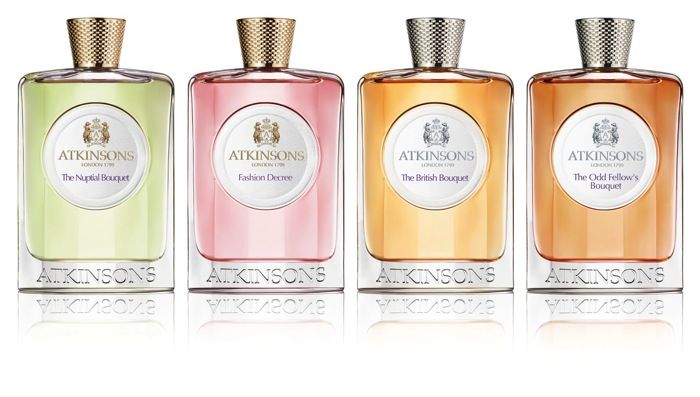