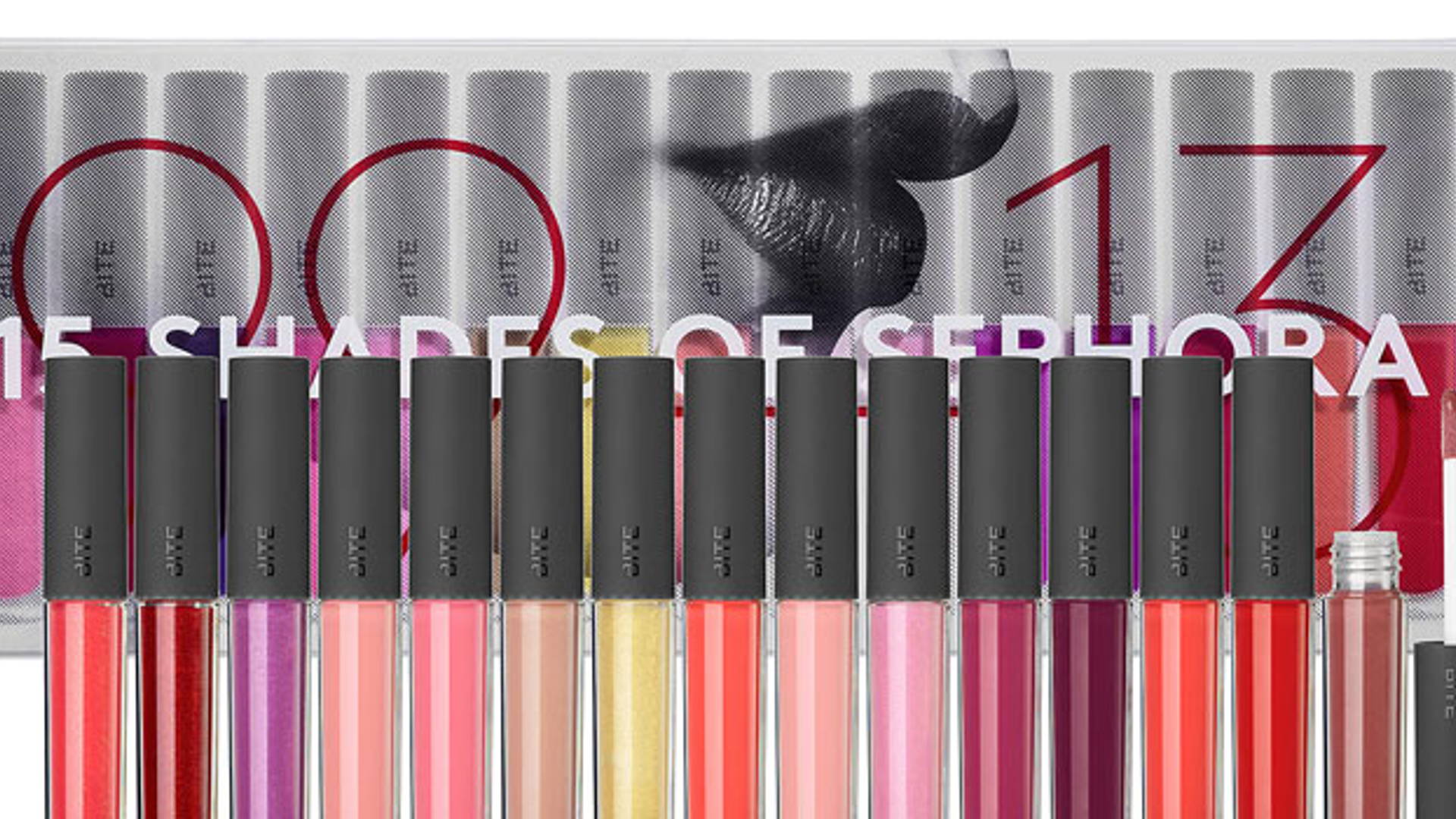 15 Shades of Sephora by BITE 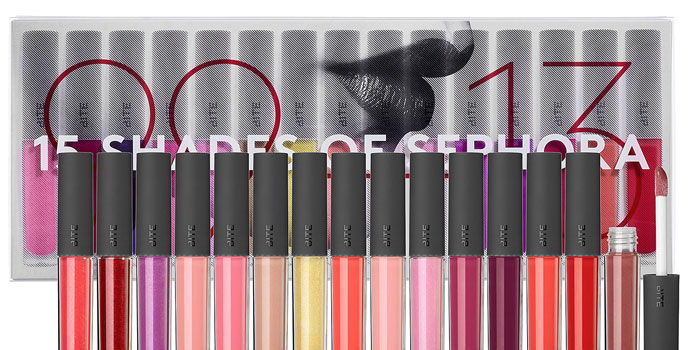 "To celebrate our 15th birthday, lip-centric BITE Beauty created this limited-edition 'lip library' containing 15 unique antioxidant-rich glosses—one for each year. 'When the news first broke that there was going to be a big celebration, I immediately thought that this was a really cool opportunity to catalog the lip trends over the past 15 years,' says BITE Beauty founder Susanne Langmuir.

“We took a look at all of the past Sephora catalog covers to see the most iconic color trends over the years—the past 15 years did have a color for every mood and every season.” RENEE TRILIVAS

1999: “It’s a hot pink, but if you look closely, there’s some gold pearl that gives it this sunny, vibrant lift without it being shocking. It’s a fairly glitzy pink.”2000: “This is a decadent cranberry shade, and it has a pearl effect to make it even more opulent.”2001: “This muted pastel purple color has almost a foil finish—it’s still very relevant and trendy today. It’s a cross between lavender and violet.”2002: “I’m not exactly sure when pop stars began wearing this shade, but I think it was around 2002! It’s modest and wearable; feminine and fresh, but universally flattering.”2003: “This is a bubblegum pink. There’s a lot of white in it so this color looks great on the lips—it gives them luminosity without shimmer.”2004: “I love this shade. I think it’s for every woman. There’s a bit of champagne shimmer in there, so it’s understated and glamorous at the same time.”2005: “This lemony gold shade was very much on trend for 2005. It’s great for layering, when you want to style up anything you’ve already got on your lips—just add it on top.”2006: “It’s the perfect peachy pink. It’s pastel and sheer, so it’s an easy pop of color.”2007: “This creamy pale pink flatters all skintones and enhances the natural fullness of lips.”2008: “This is a candy floss pink—it’s got a bit of a sugar rush to it, but it’s low calorie!”2009: “It’s a deep magenta color. It’s quite powerful, without being an electric shade—it’s very sophisticated.”2010: “In 2010, BITE officially joined forces with Sephora as its exclusive partner! This muted plum is an evening gloss. It’s a serious, statement lip. It’s a great for going out to dinner. This is also the year we partnered with Sephora to create the first lip-only beauty line.”2011: “This is the year we officially launched BITE, which is huge because it was the first ever lip-focused line! This pinky brown shade is very grown-up and polished—really progressive and modern.”2012: “Here, we get a little crazy with this Tangerine Tango shade. It’s a cool color and it’s coming back in a big way this fall.”2013: “This a poppy red. It’s definitely on focus with Pantone’s colors for 2013. It’s a beautiful, juicy red tone.” 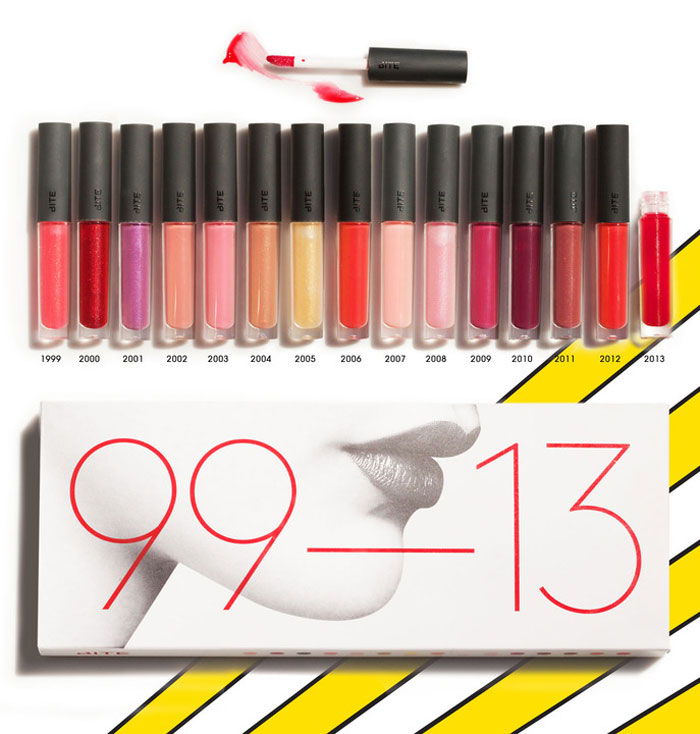 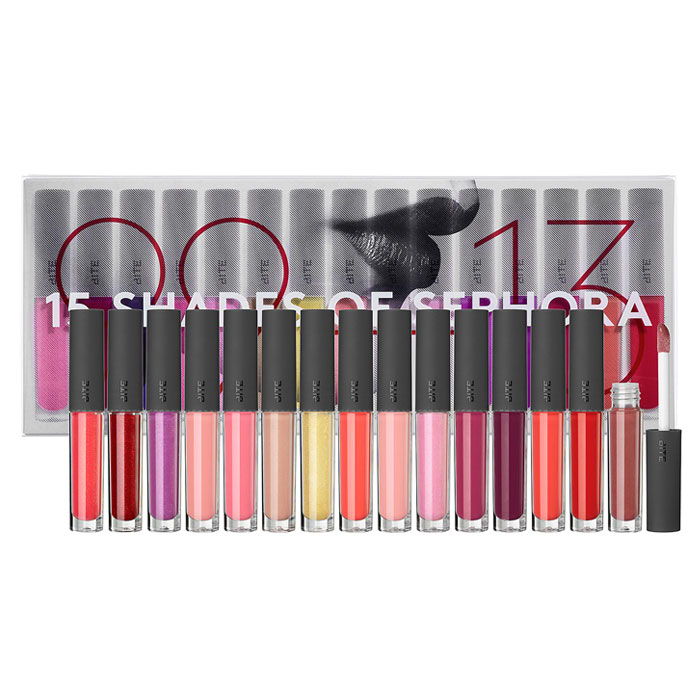