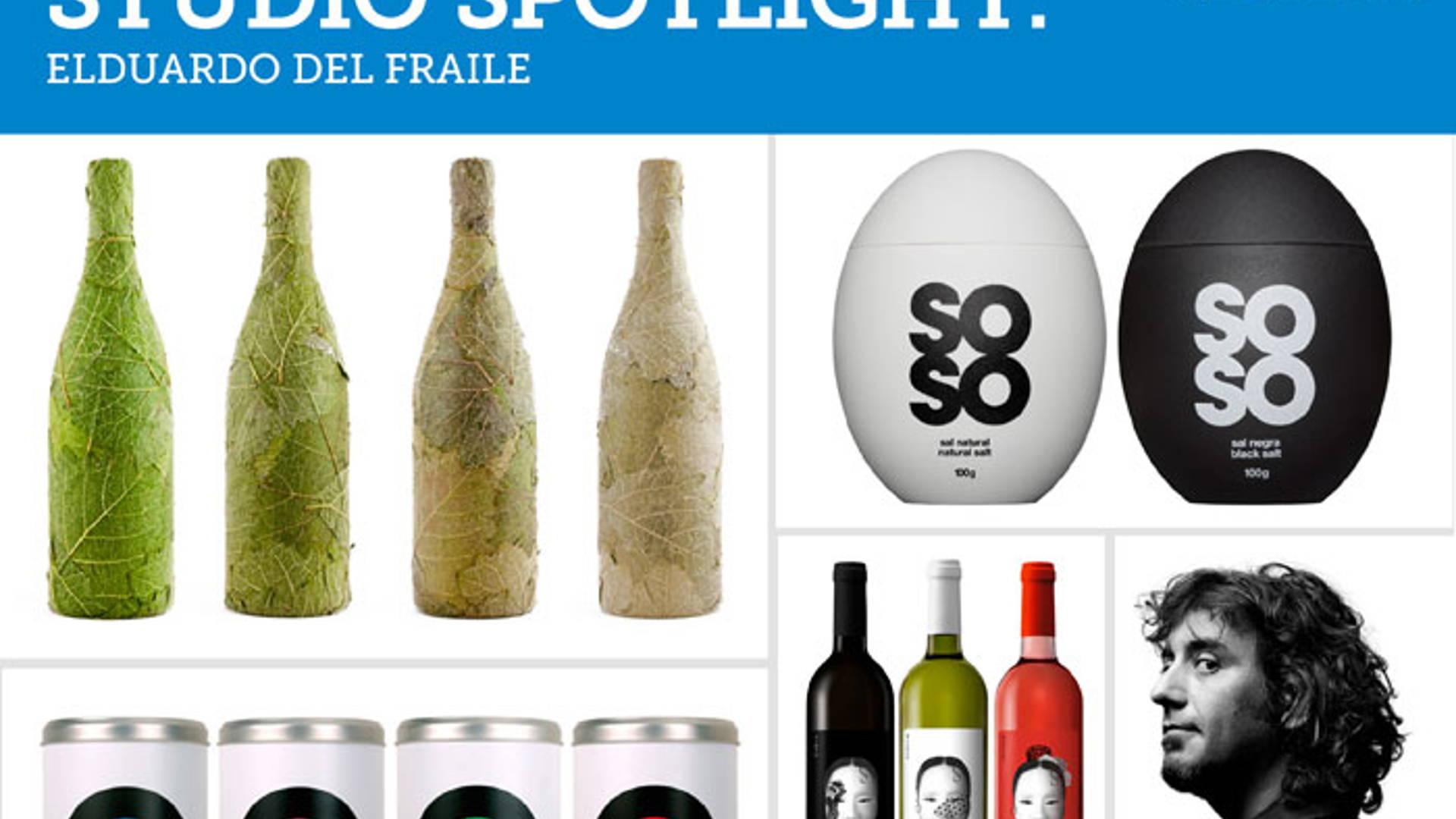 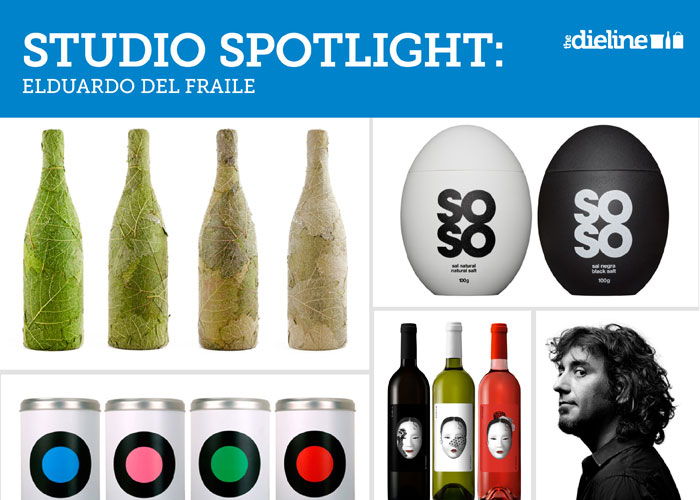 Is there something in the Spanish waters, or perhaps, the wine? This week we shine the spotlight on another Spanish studio/ designer, Eduardo del Fraile.

Accompanied by assistant designers as well as his sister, Ana who manages the studio, Eduardo del Fraile plays the role of Graphic Designer and Creative Director. Known for their work on branding and packaging for gourmet food and creative wine labels, DFraile Studio's door has been open for more than 5000 days. (yes, they are counting)

"The idea was to work as an innovative and itinerant restaurant with few tables and a very carefully crafted menu in which I play the role of designer and creative director." said Eduardo. "I resolve projects by taking a big-picture approach, from naming through to identity, packaging and product design, publishing projects, interactive projects and applications in spaces.

"Experience has shown me that a graphic designer can work on a product with a very personal vision. In my case I call it a 'symbolic product'. I hope you enjoy this selection of projects as much as I enjoyed designing them." 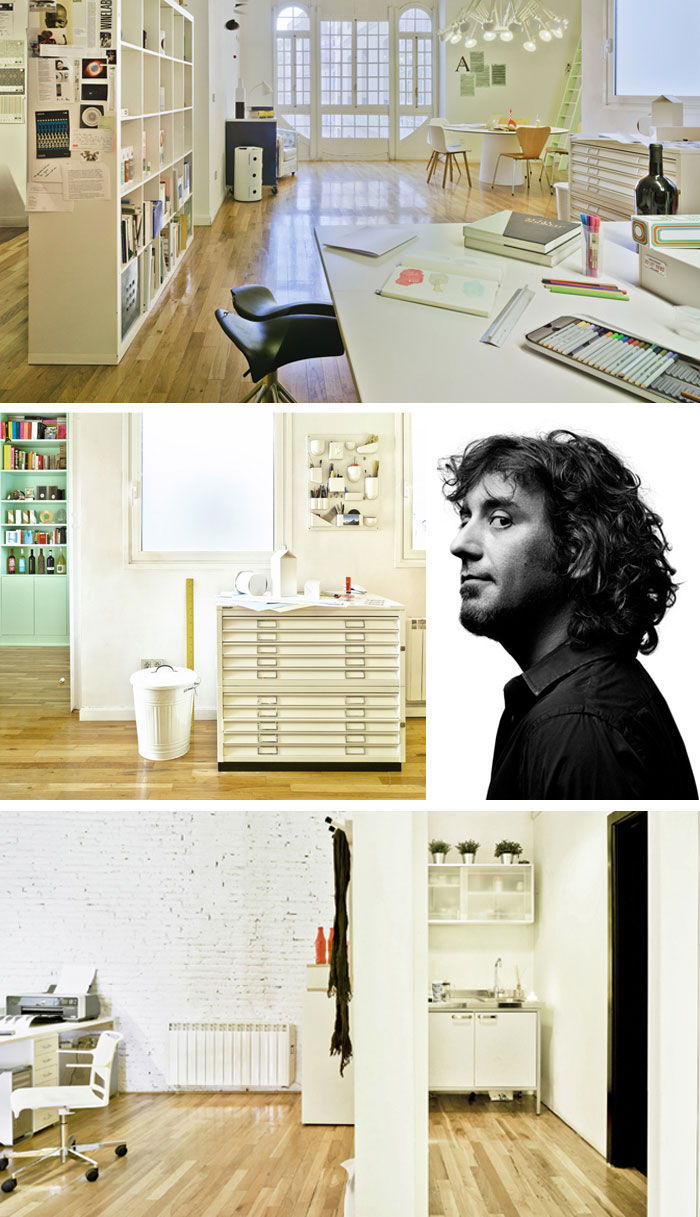 "Eduardo del Fraile takes a direct approach that cuts through the diverse disciplines ofdesign. He links good concepts with very synthetic and well developed formal systemsusing opposing, decontextualized and humanized elements. He has the ability to relate astrong concept to an argument that sustains the brand or the message to get across. He likes cooking design on a low flame, creating his own differentiating style."

A winery that works with highly personalised wines needed a very exceptional wine with an exclusive limited edition for important celebrations. The Winery worked with a great oenologist for several years in order to obtain an impeccable wine.

The wine’s concept was to use a 1.5 litre bottle which could be shared, and which could prolong those special moments. The proposal consisted of selecting a large elongated Magnum bottle, and baptising the wine Extenso, a naming which would emphasise the idea of something being prolonged.

The container box was designed as an object of value in which the wine would be kept and which, after its use, could become a symbol of the day of celebration. Despite the impeccable appearance of the box, it’s price was very similar to that of a rigid laminated cardboard box. Many clients keep it as a kind of fetish object that symbolises the celebration, reuse it later, or decorate their own restaurant with it. Every year 600 units are brought out. 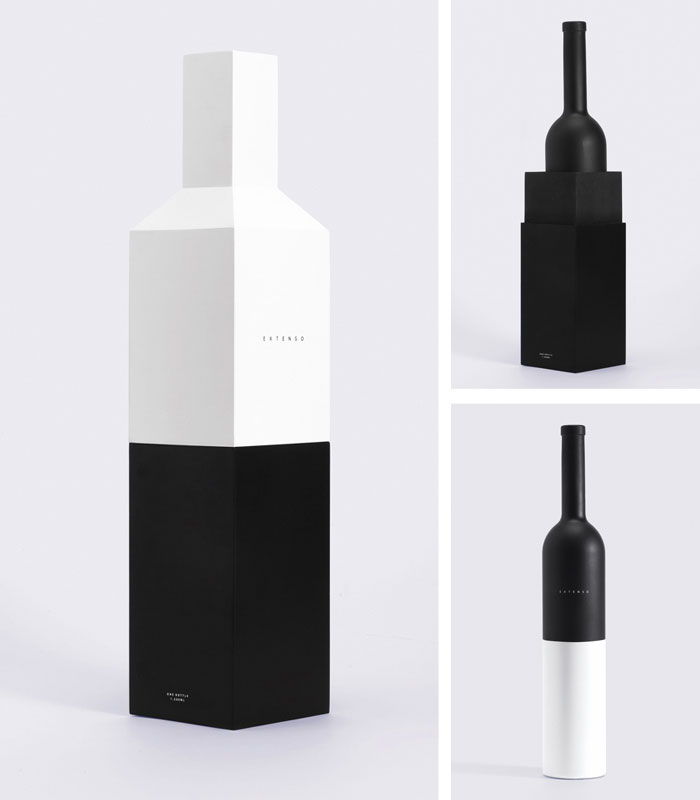 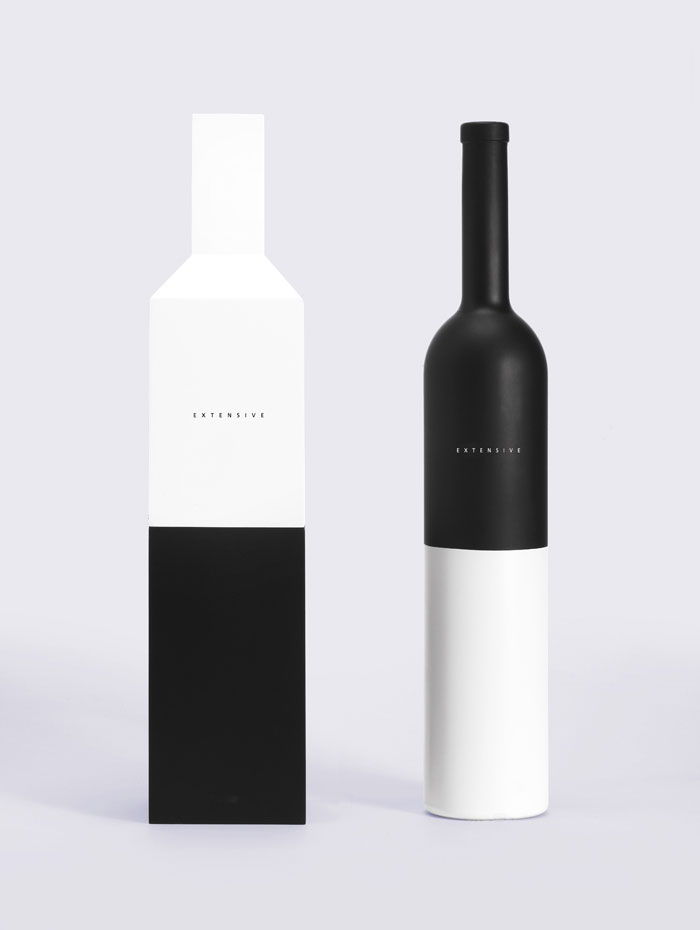 A grain of salt is a miniscule particle. This design tries to reflect the singularity of a simple particle seasoned with different flavours inside a metallic case. Each colour matches the flavour of the spice that seasons the salt. 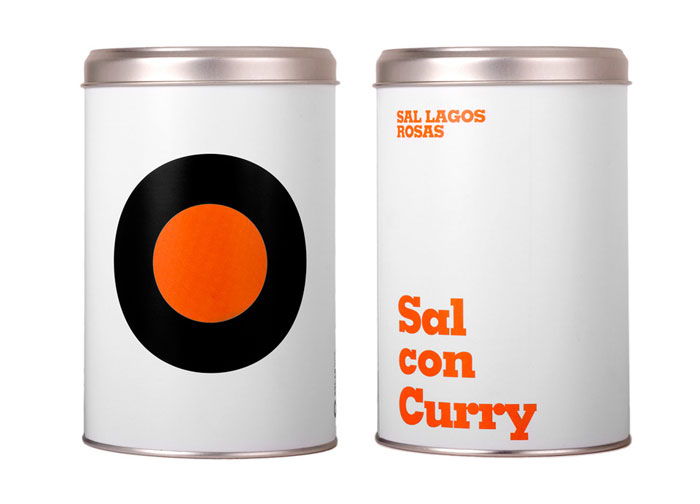 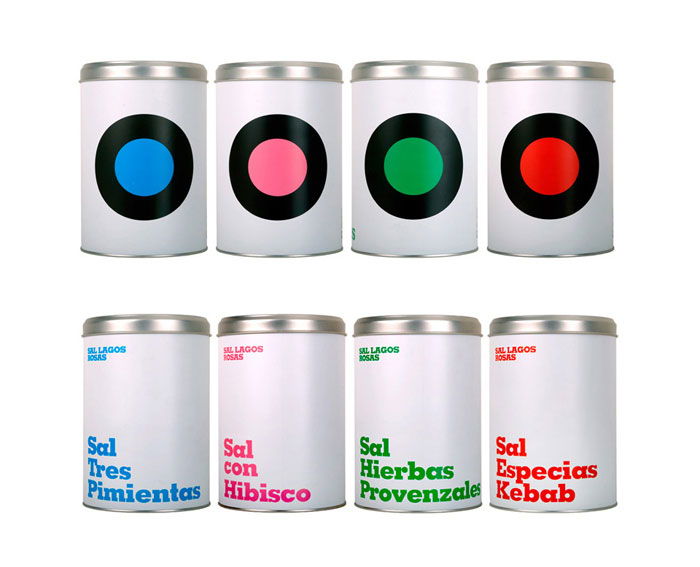 Brand created to export spanish good wine at an affordable price. The graphical solution was inspired by the traditional elements of the bars in Spain. Spanish classics in bars menus are written in many types of wall. And the classic that waiters have to ask the tops in the kitchen is just shouting to the cook: a ham! a tortilla!. After eating the usual old teeth cleaned with a wooden stick. 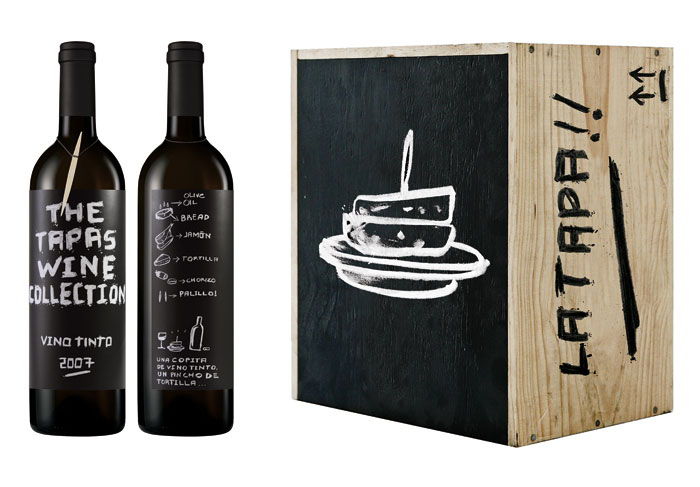 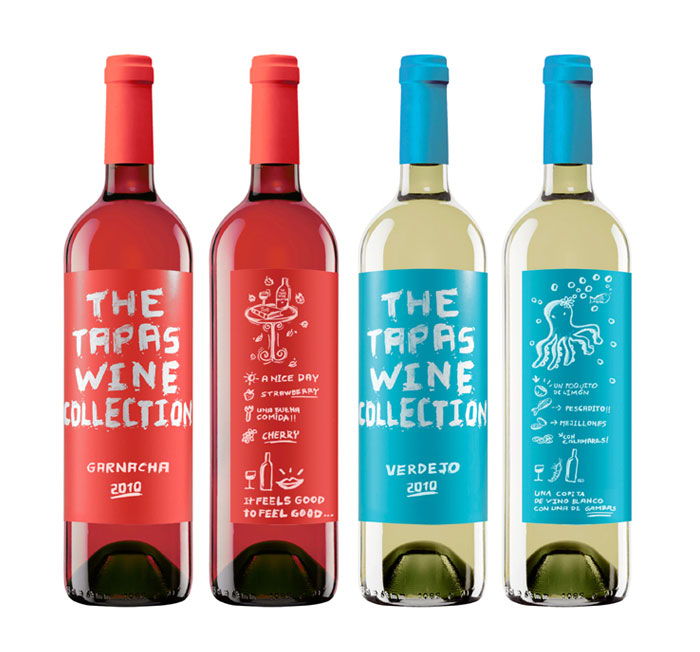 A long-standing Spanish winemaker wanted to enter the Chinese market. This process had to be as harmonic as possible. French wines, which are the most popular in China, usually choose to keep their identity 100%, showing their authenticity. We decided to merge the Western and Eastern cultures.

LASCALA is how the Chinese call the theatre. A face painted all over imitating a theatre mask with Eastern eyes represents China, and the merger is represented by ‘LA PEINETA’ (the ornamental comb) Rosé Wine, ‘EL ABANICO’ (the hand fan) White Wine, ‘LA BAILAORA DE FLAMENCO’ (the Flamenco dancer) Red Wine. Products that are not originally manufactured in China cannot bear Chinese writing on the front packaging. The typography used is pending from a vertical axis, like the former Chinese alphabet. 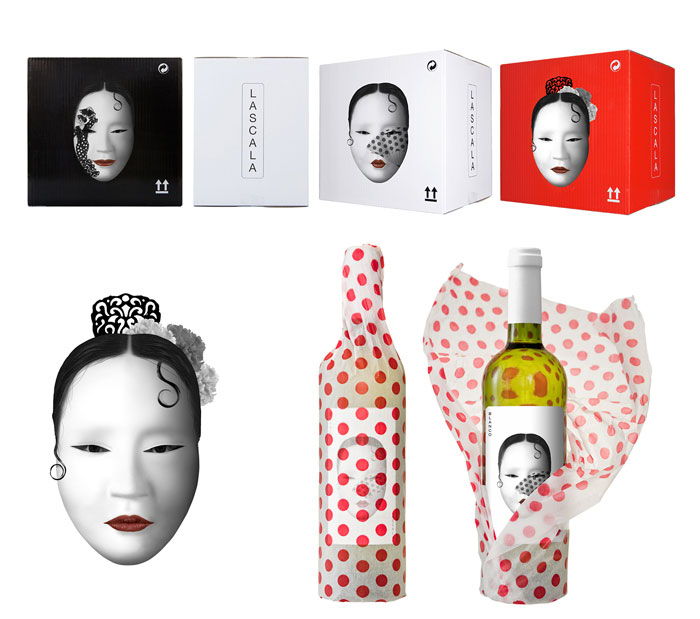 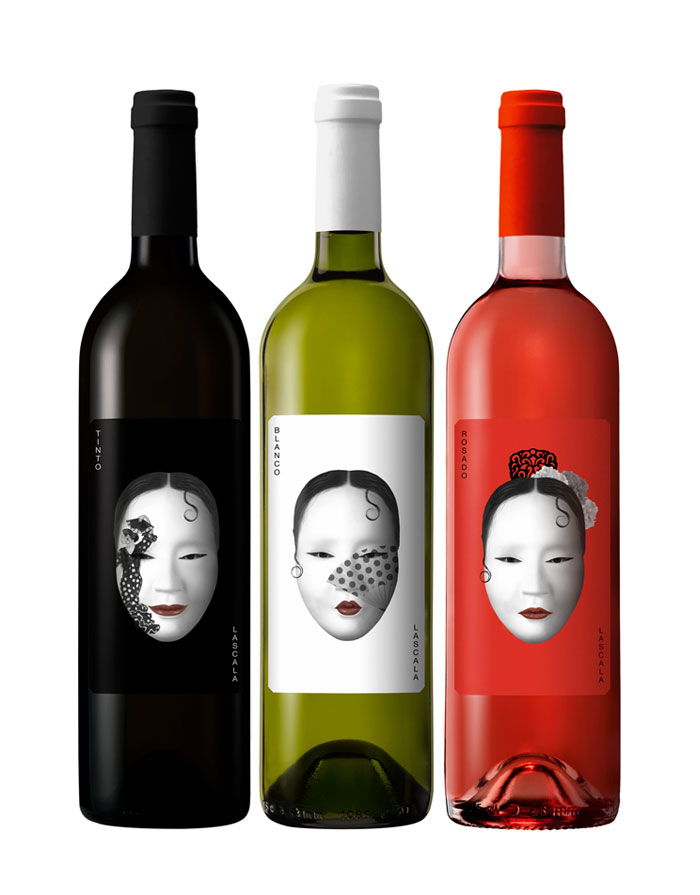 "Every year near the grape harvest wine producers need to prune part of the leaves on the vines to let more sunlight through so that the vines grow with more energy. The concept of the 'Leaf' project is to reuse the leaves that are cut off during the pruning and use them as they mature on the skin of the bottle. The leaf becomes the label. By substituting the paper, we talk about the origin of the product, introducing the client to the denomination and culture of the wine he or she is going to drink" 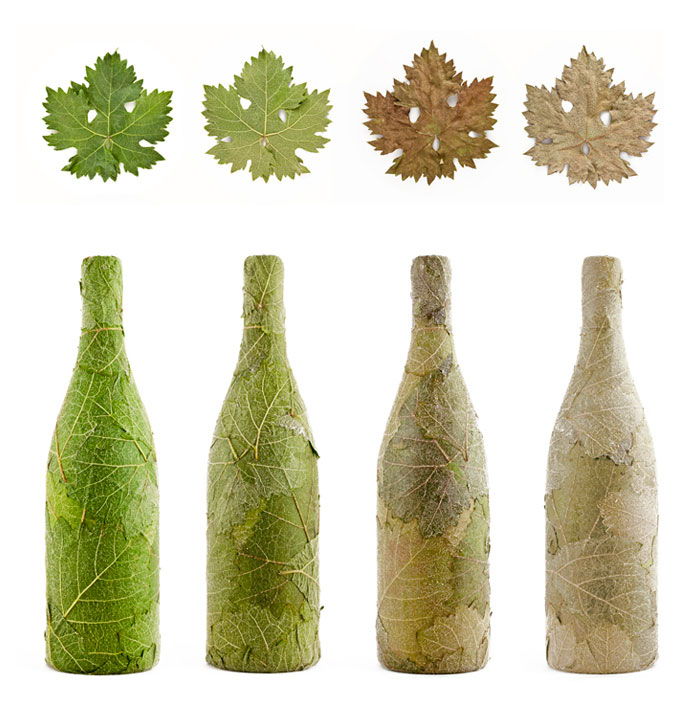 "Soso is a brand of high quality salts. The client was looking for a distinguishing container that would be used both to store salts and as a salt cellar. Instead of salt shaker. these salts are spiced to taste at the table offering a great opportunity to tasting with meat, fish, pasta, cheese...

The salts come from a salt mine located in a nature reserve in the South of Spain. An egg is the perfect container, its own shell is the packaging, it was decided that the shape of the egg would be reproduced for the product container. Each type of salt can be distinguished by its colour. The project and the brand were named SOSO, which means 'lacking salt or short of salt' in Spanish." 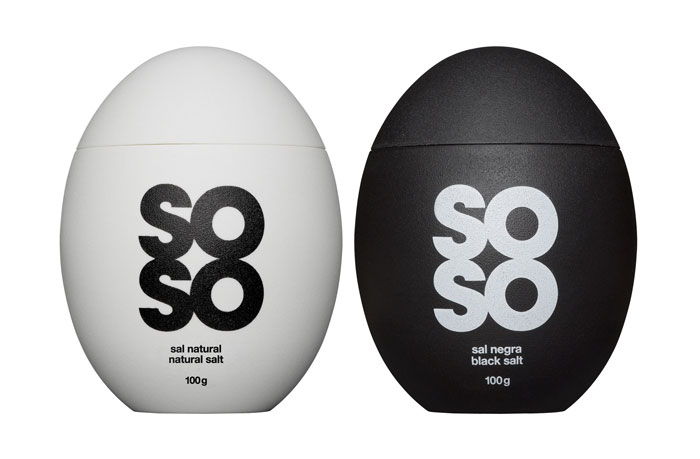 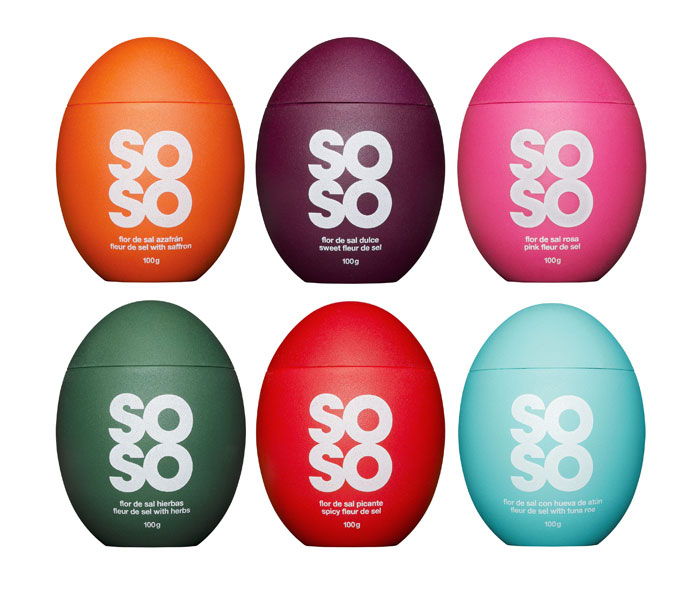 "I have been renewing the identity of Interapothek for several years as their image advisor and art director on all design projects. This experience has brought great financial rewards and notoriety to the company with its profits increasing more than 40% thanks to the new overall design. The brand is currently leading the pharmacy products sector in Spain and is now delving into foreign markets. The philosophy applied to the design methodology is to get closer to the consumer and to get away from the sometimes cold, stagnant identities in personal care products in pharmacy.

This concept for toothpaste is based on a personal experience. When I was a child I liked using a lot of toothpaste on my toothbrush. Too much toothpaste felt like a lot of fun and I thought that way my teeth would be whiter.

The silhouette of the "Nurdle" spread out over the cardboard pack became a visual reference to differentiate the design of this dental range. The advantages of the product are illustrated as statistics on the outflowing of pasta." 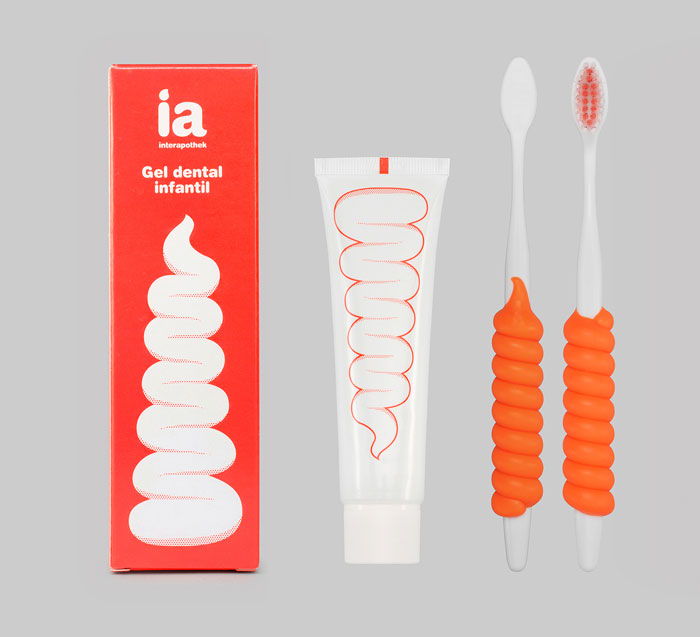 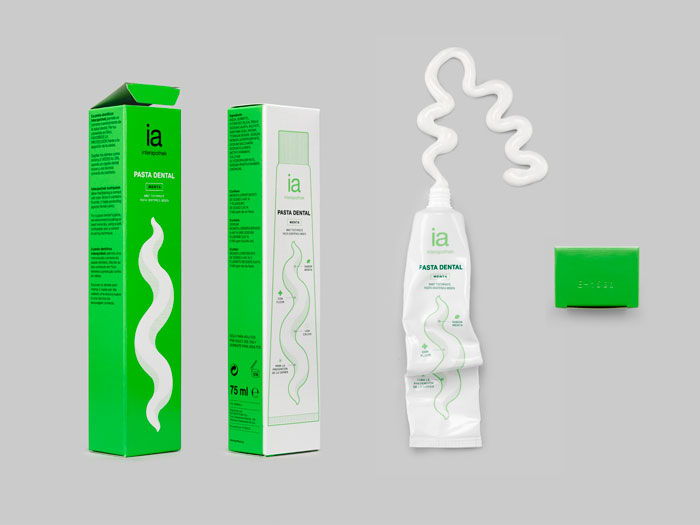 "Christmas special edition of a wine for a publishing house specializing in books about design. The label is designed to be like a book, almost the spine of a book on a shelf where we are looking for the title of the book we want to read.

I like this idea because it alludes to the romanticism of wine. There are so many varieties with different expressions of a wine on a piece of paper stuck to a bottle. I think there is a similarity between wine and publishing; a crossroads with countless possibilities..." 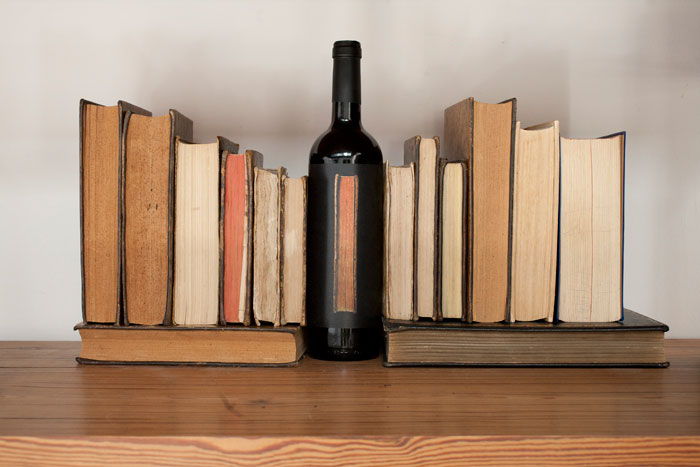 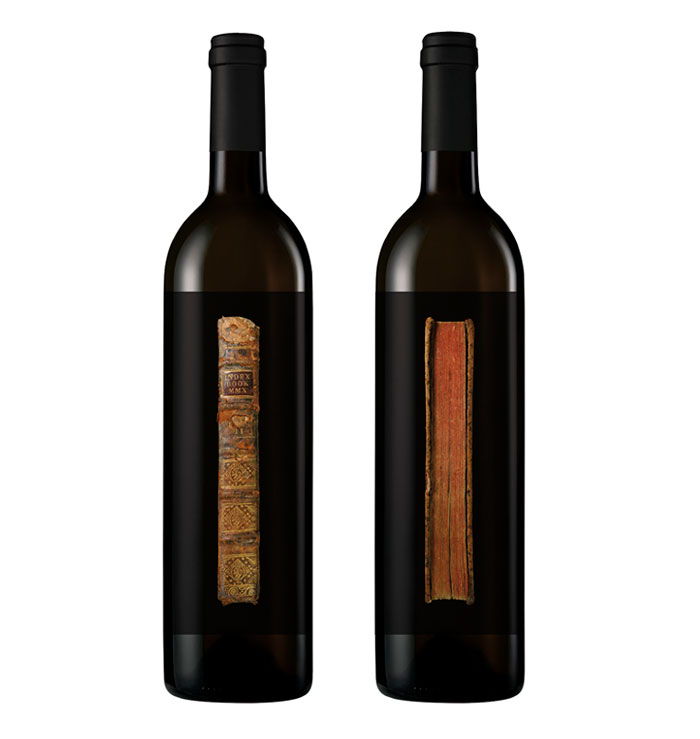