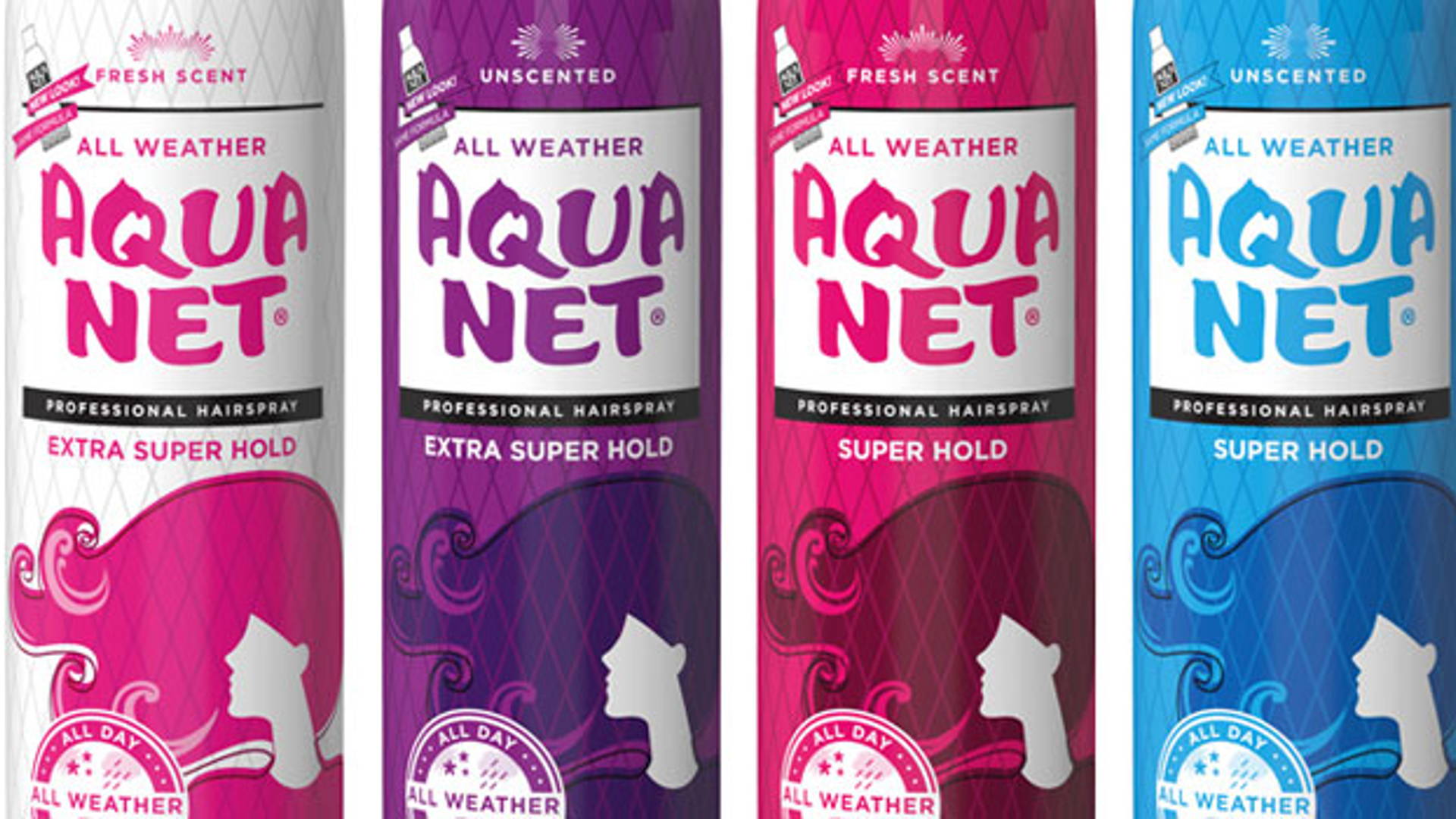 Before & After: Aqua Net 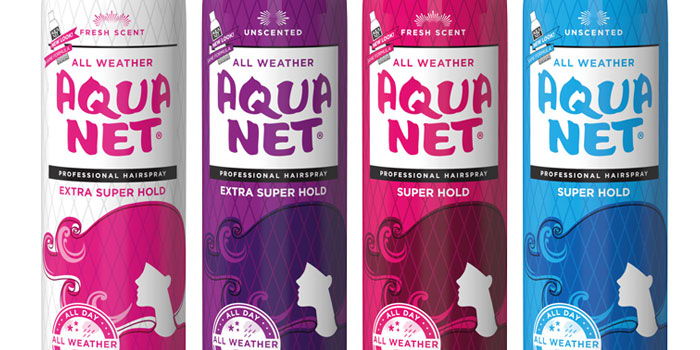 "As often happens to older, beloved brands, Aqua Net changed owners multiple times and the brand went through an evolution; a simplified, diluted logo and weaker brand impression.  After Lornamead, Inc. acquired the brand from Unilever in 2006, the company looked for opportunities to reinvigorate the brand.  “The package had lost its personality with its previous owners,” said Randy Sloan, President of Lornamead.  So last year, Randy and the Lornamead team decided it was time for a makeover and called in Terri Goldstein and The Goldstein Group. The team of strategists and designers had a firm mandate: “Make the brand relevant and exciting once again, but don’t lose one current consumer!”

"Given Randy’s mandate and the desire to extend the brand’s reach to a broader audience, Darcy Bolker, creative director, led the design team through a historical review of the brand and initiated their proprietary Shelf Sight Sequence™ process.  The goal was to rejuvenate Aqua Net’s glorious past while creating brand relevance for a younger audience without alienating its heritage users.

The discovery process with Aqua Net began by returning to the brand’s conception in the 1950’s. After it was introduced, Aqua Net grew to be a household name. It was first found on the dressing tables of fine salons and made the leap into retail in the late 1950’s.  The brand has long held cult status and its image has been burnished by a bevy of big hair beauties from Donna Mills to Kim Cattrall; represented on screen in such hits as “When Harry Met Sally” and “MadMen”; and it continues to flourish on YouTube.  Around 2002, with the Broadway revival of Hairspray, Aqua Net enjoyed a revival of its own as the brand name once again became top of mind.

We learned the brand had been known as the “All Weather Hairspray” both on the canister and in the advertising. The brand had always had the uncanny ability to hold hairstyles through rain and high humidity.  Our investigation also revealed that from 1964 on, the brand’s logo appeared as though it had been spray-painted. We found the iconic logo to be perfect in its past presentation. The printing was a challenge, Darcy Bolker noted, “we were limited to CMYK and the challenges of flexo, to not increase the cost of goods, but we are thrilled with the outcome.”

Randy is very enthusiastic about Aqua Net’s new design and the diligence and creativity that The Goldstein Group put into the restaging process.  “They’ve been terrific, very smart and creative,” he said.  “They identified areas where we could enhance the graphics to create more shelf impact, better communicate the brand’s point of difference and create a brand personality.  The Goldstein Group helped us recover the brand’s heritage and made it unique and fun with a modern design.”

The new Aqua Net packaging can be found in stores across the nation."

Designed by The Goldstein Group 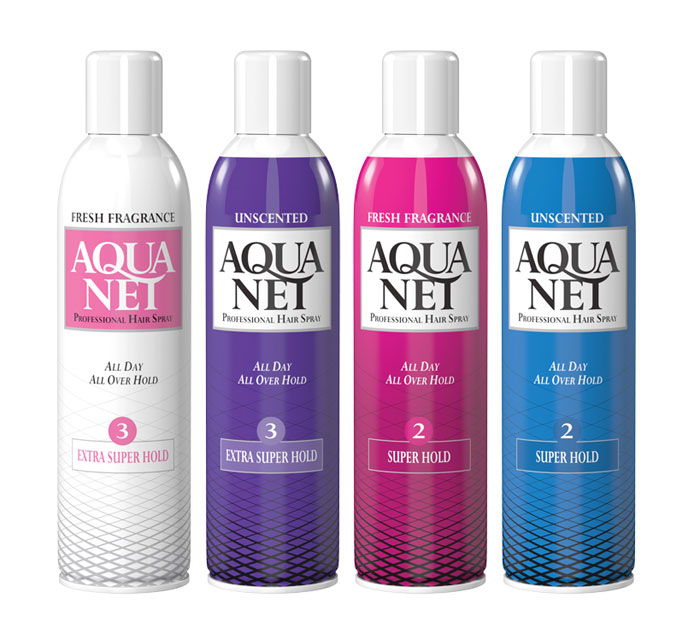 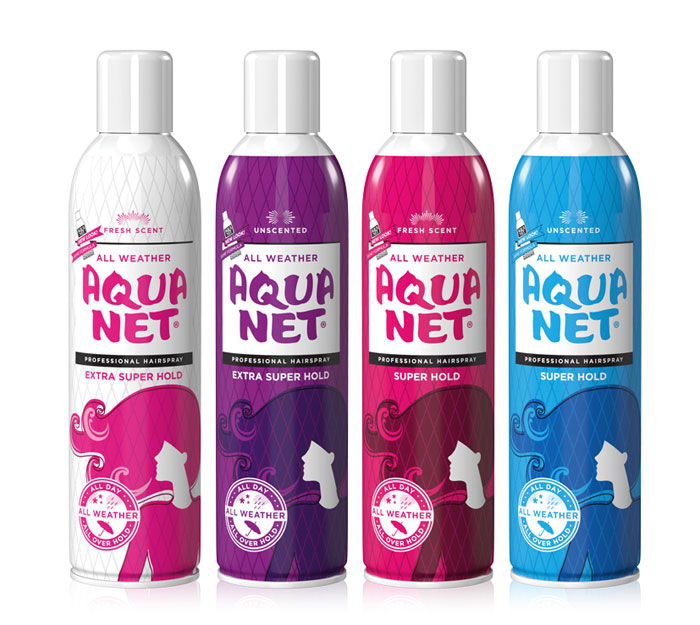 A Look at Aqua Net's Past 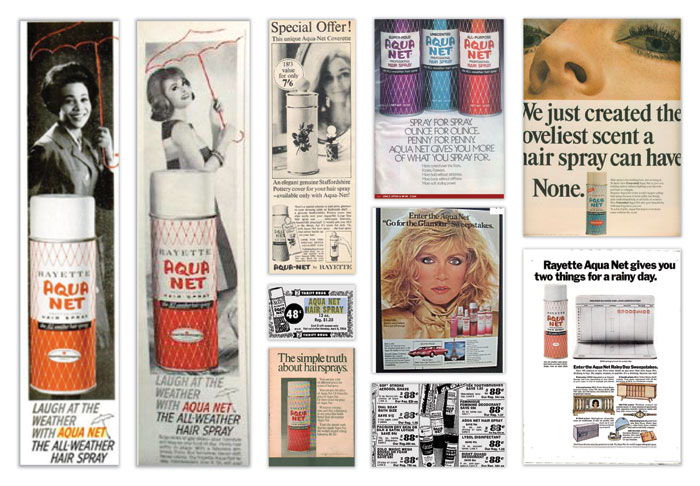