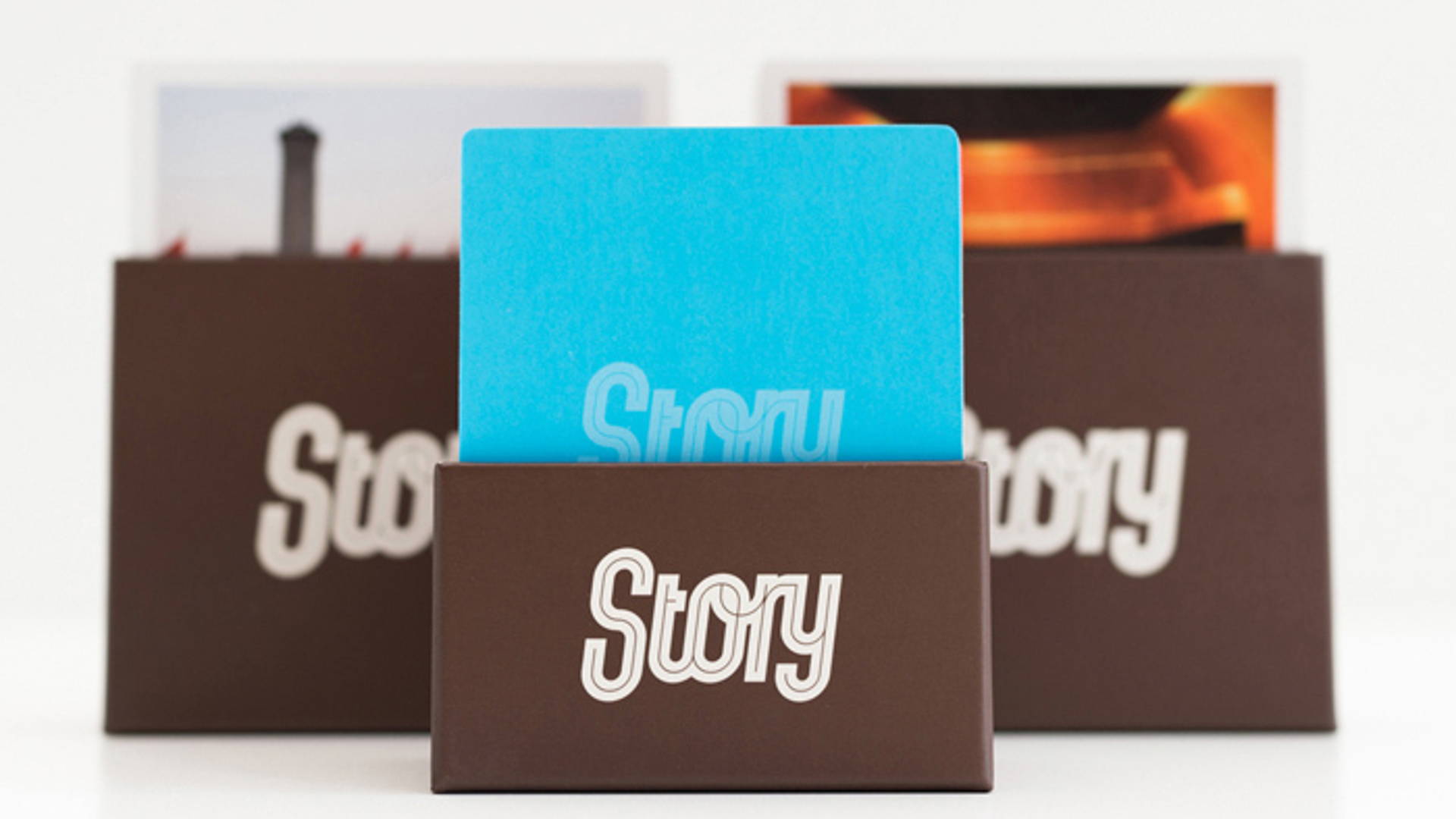 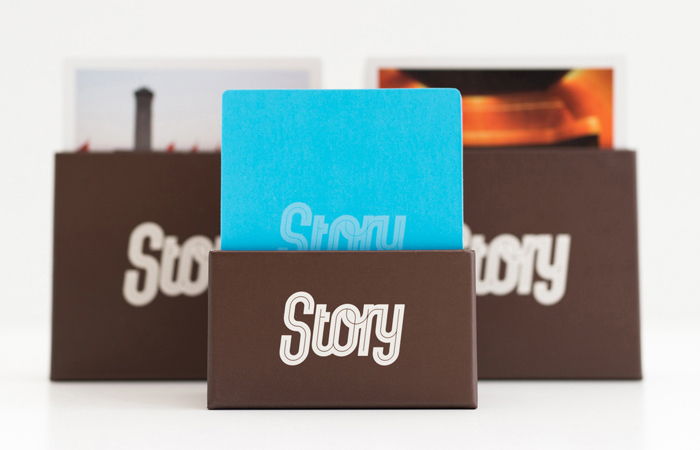 We wanted to make an analog game for a digital generation that played equally well with families as with groups of friends. So we focused on making a game with as little text as possible to make it playable from a very low age. The tricky part was making it fun enough for adults to play as well. We came up with Story, a picture based board game where it's as important to recognize a good story as it is to tell one, because we didn't want to exclude those that aren't great storytellers from the fun.

Story is well-designed board game for all ages. 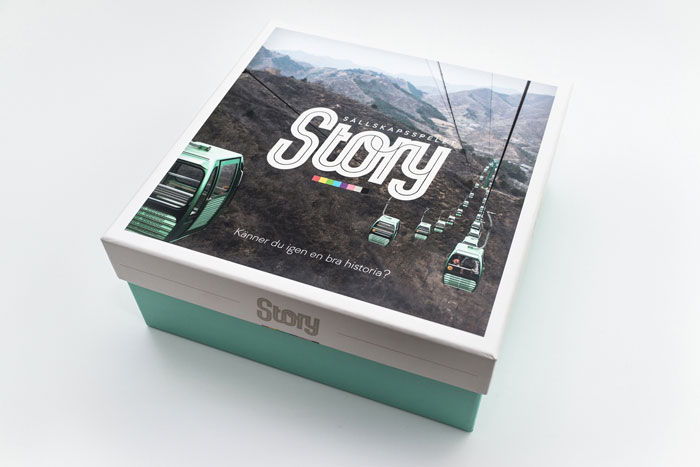 Our goal was to create a box with a tactile feeling giving the user a luxurious experience. The box is made from three different paper materials: The lid is made of debossed textured grained paper with a label covering the debossed area making up most of the top lid. The bottom box is covered in matt lamination for a smooth feel. 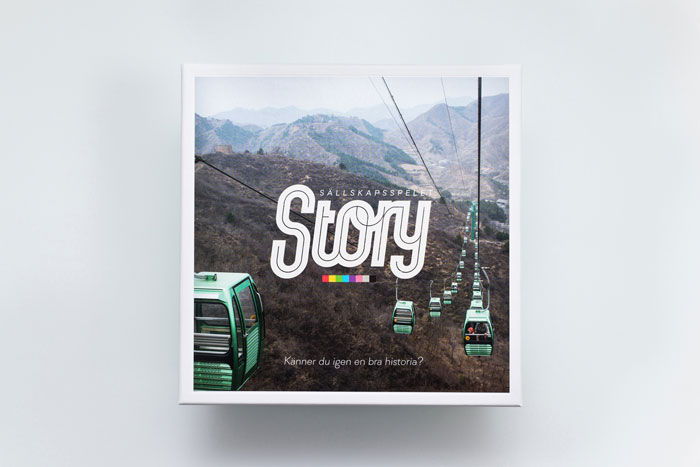 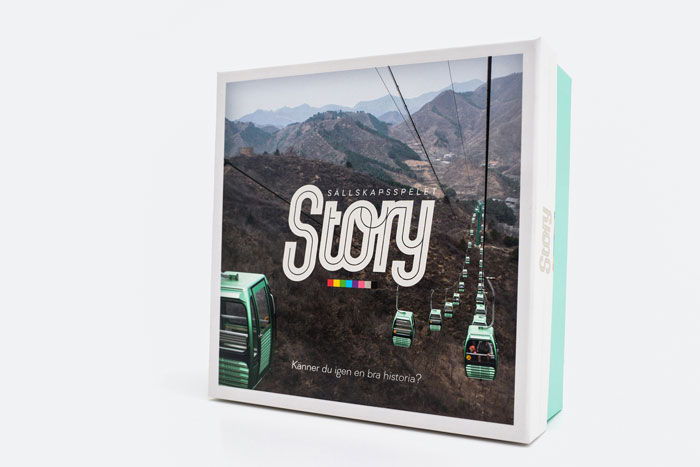 Story is about telling stories based on retro Polaroid pictures. The box has a lower lid than bottom, inspired by an old shoe box full of memories. 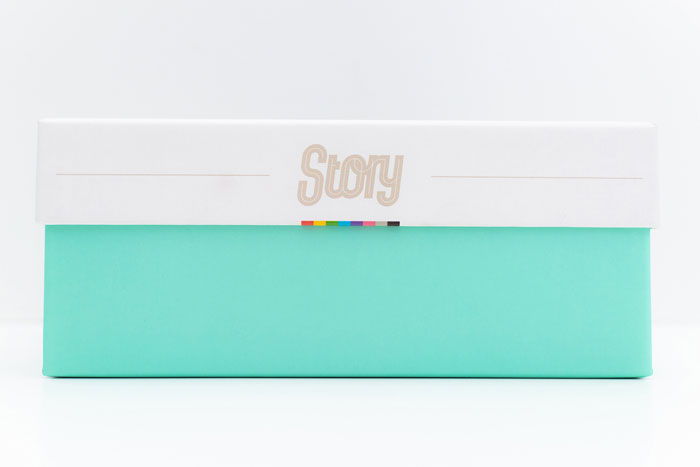 The bottom of the box is matt laminated in a nostalgic solid minty green Pantone color. 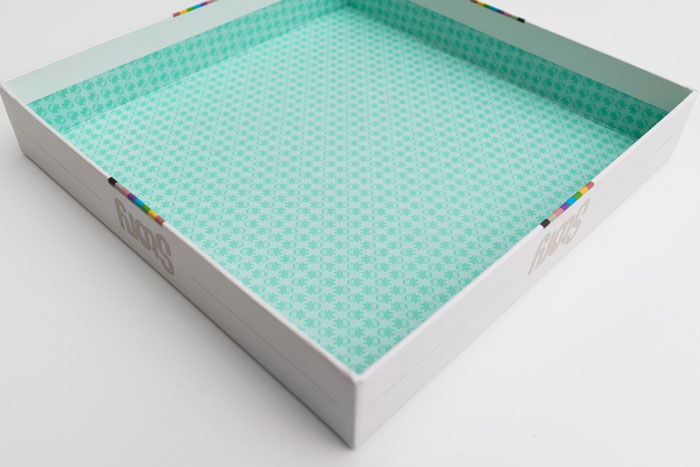 We were inspired by old luxurious hardcover books to use a patterned box lining. We use a ninja pattern inspired by our mascot. 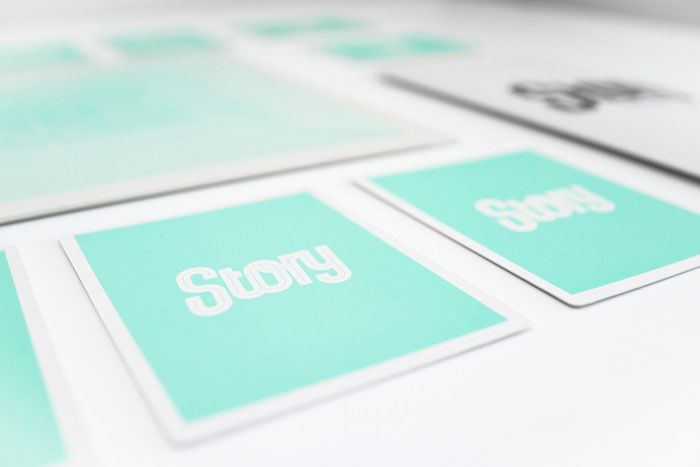 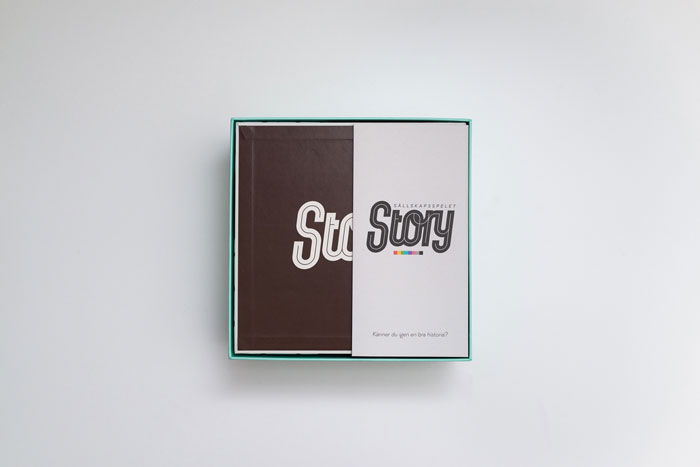 The bottom of the game board uses textured paper, a solid brown Pantone color and a light beige tone for the game board logo and game rules that both pair well with the minty green. 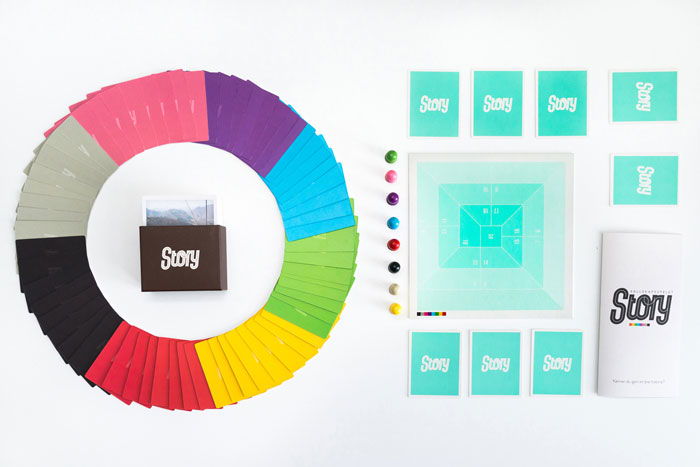 Story is a game full of color that has an almost naive retro feel to it, without ever compromising with design quality. 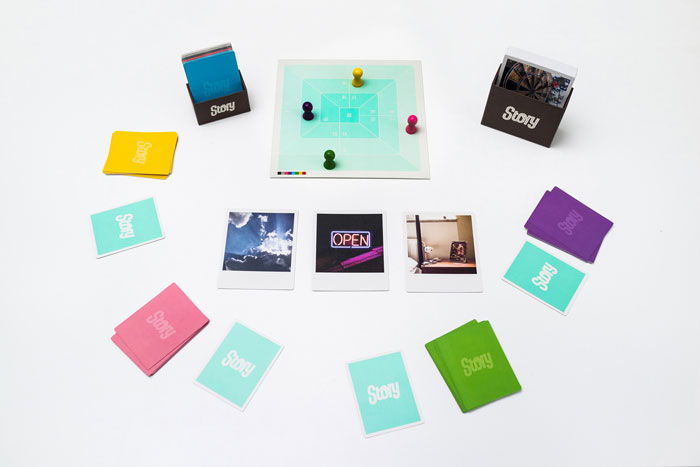 Players tell stories based on photographs and then vote on the best story with their colored voting cards. 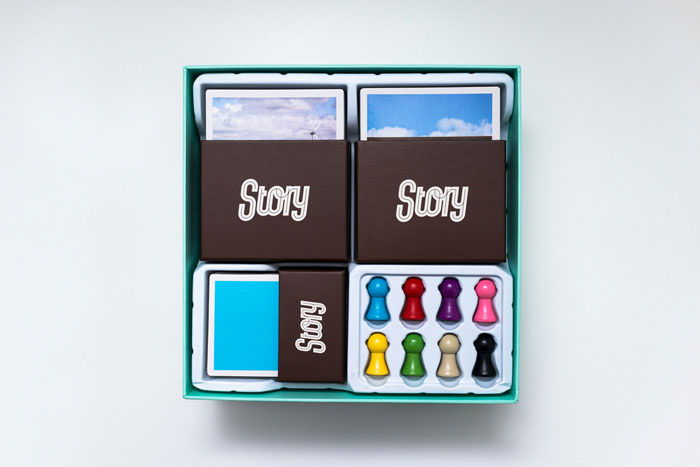 It is important that the player doesn't feel cheated by a box much bigger than it has to be, which is common with board games. That's why the box is based on the contents, instead of making it bigger than necessary and full of air. 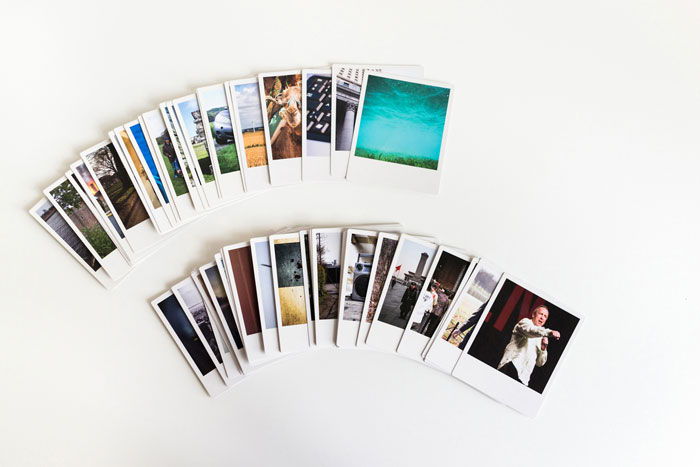 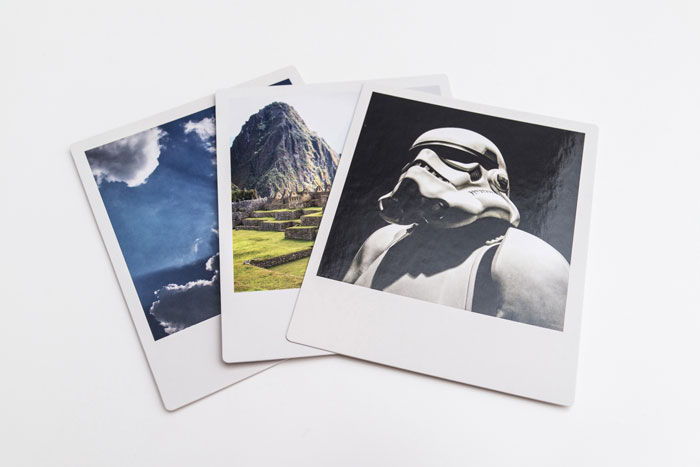 The picture cards flirt with the old Polaroid format and are the same measurements. Made from 400 gsm paper with gently rounded corners and glossy spot UV varnish in the square photo area to differentiate the photo from the rest of the card giving the players a tactile feeling. 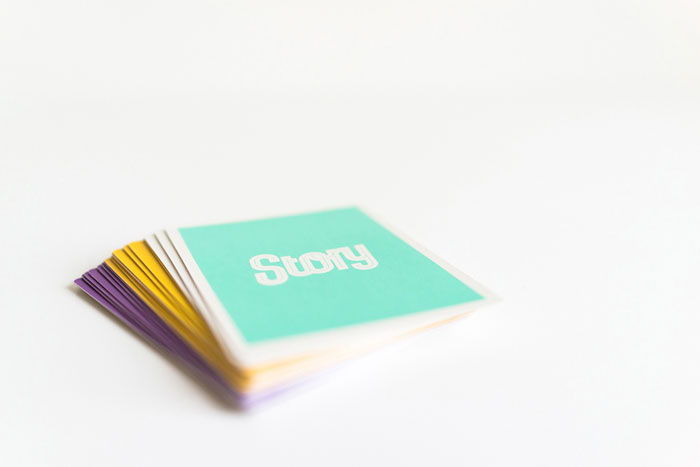 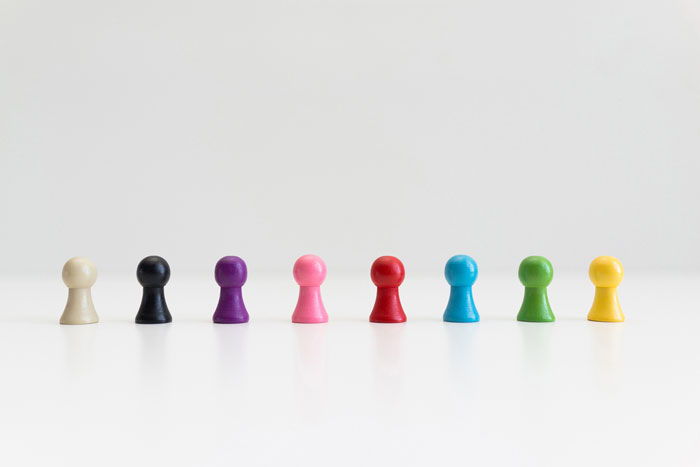 The playing pieces are wooden like they where in our youth, and painted in the same Pantone colors as the voting cards. 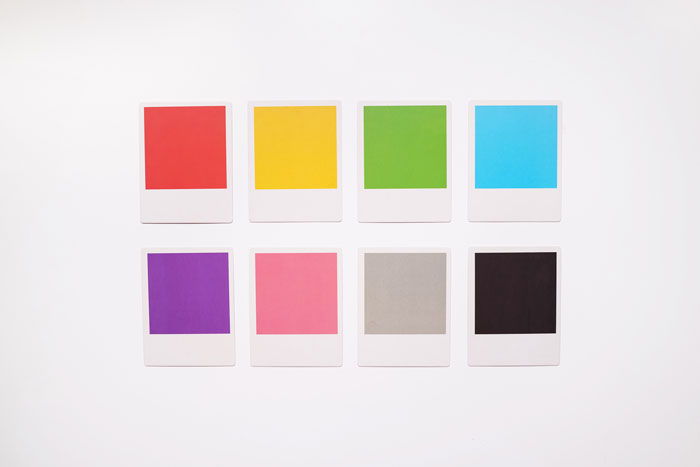 The front side of the voting cards are miniature Polaroids in size, to keep with the theme of color and simplicity. Made from matt 400 gsm paper with gently rounded corners.