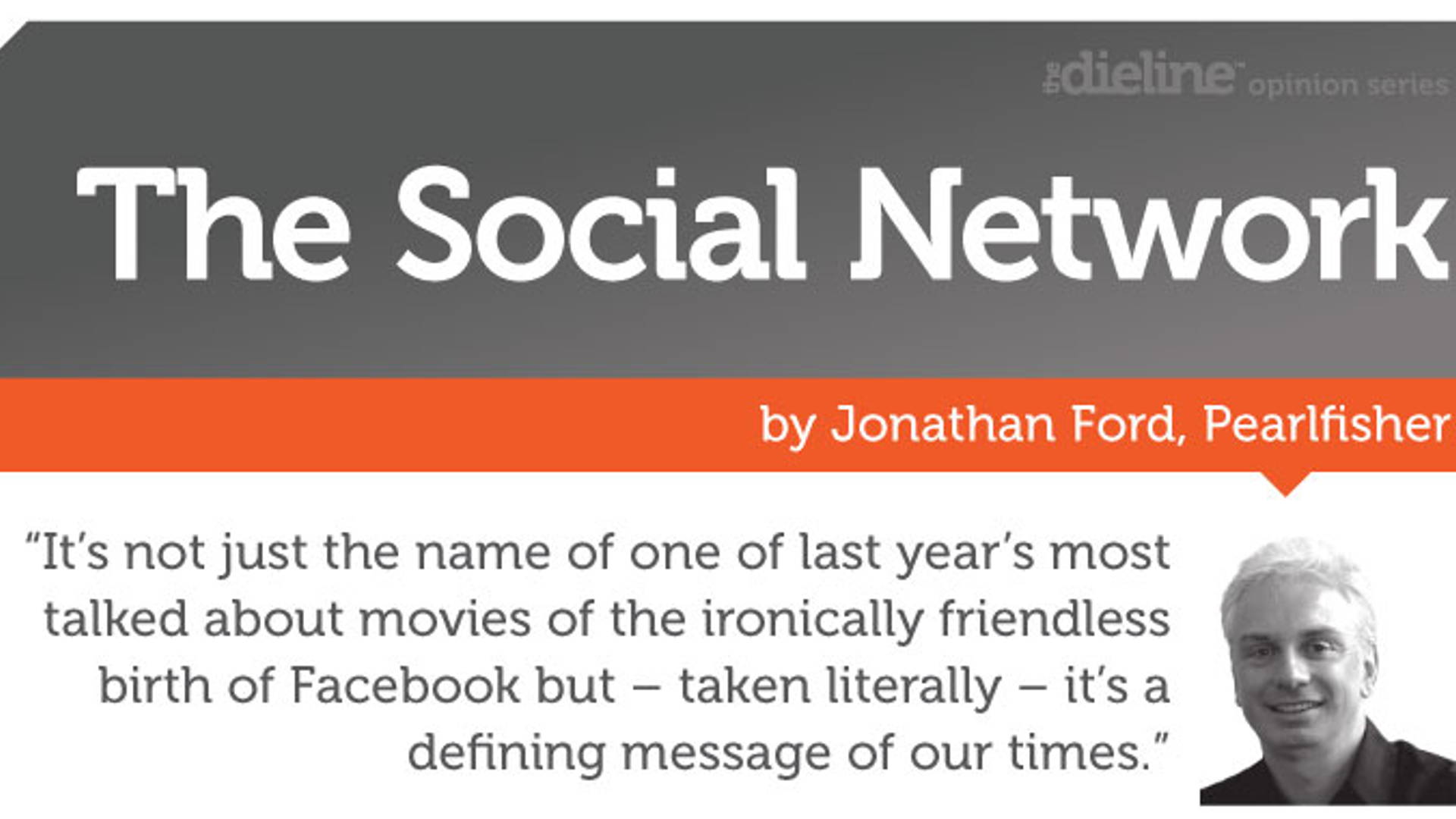 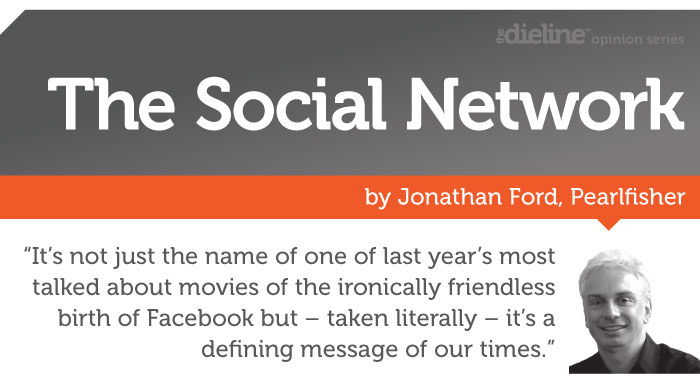 It’s not just the name of one of last year’s most talked about movies of the ironically friendless birth of Facebook but – taken literally – it’s a defining message of our times. We can’t escape the impact of social networking and social media as one of our key communication tools. As our opportunities for creative interaction continue to advance due to the growth of technology, consumers are easily overloaded. Anyone noticed that apps have simplified thousands of things you’ve never had to do before? But also brands are guilty of diffusing – rather than strengthening their offer – by indulging in knee-jerk reactions and ‘me too’ initiatives. So we need to do the right thing when designing, which is hard in a digital world that is always changing and innovating.

Unless you live in self-imposed exile, we all want to be connected. But in what way? We live in a more connected world than ever before but, the dichotomy is that, we are actually much less physically connected. Many do point the finger at social networking sites such as Facebook, and their success does make them an easy target, but this is maybe a somewhat skewed – and again knee-jerk reaction - when we actually study the DNA of the brand. I’ll come to that later…

Anyway, social media – and design for social media - is a hot (and much debated) topic and I don’t want to simply regurgitate what’s already being said. However, I do think it’s time to find a new perspective on this issue and take a bit more responsibility for helping shape a future direction – rather than just being led. Of course, we need to understand and integrate the merits of new technology and social advances. But, it still is - and always will be - about how to communicate the big idea in a relevant and experiential way. The big idea comes first. Medium second. Put the two together in a desirable way and you have a connection. Exploit it or be lazy and you’ll waste thousands of dollars and relationships. So we need to fully embrace designing for social – in every aspect - not just social media. It’s all about connection – but connection in the right way.

Last summer, Cadbury, the global chocolate brand owned by Kraft, launched “Spots v Stripes” - a massive £50 million campaign designed to boost Britain’s community spirit and bring a “spirit of play” to the nation ahead of the 2012 Olympics. The campaign focused on an online initiative inviting users to join teams and compete in a whole host of games from golf to tiddlywinks. In the past couple of months, the media has been awash with stories purporting that the campaign has not yet generated the intended interest and maligning the campaign for – yes, you guessed it - putting social media first and the big idea second. Furthermore, the packaging expression of the core idea literally varnished over the hard-earned iconic design that it recently achieved.

However, in contrast, the resurrection of the now iconic fashion brand Burberry brilliantly showcases the benefits of adapting social media to suit your strengths and create a new audience wanting involvement and connection. Their website artofthetrench.com allows their customers to submit images of themselves in the brand’s most iconic item and is -in their own words – “a living celebration of the Burberry trench coat and the people who wear it”. I do think fashion brands know how to get the best out of an online experience by getting to know you as you get to know them.

Our whole culture is much more about the experiential and emotive connections and finding new ways to facilitate this. And, of course, social media seems an obvious and new route for many. But, it’s not a given. We would all do well to remember that human behaviour and motivation changes much more slowly than technology. By focusing on the people you wish to attract, you are not just more likely to create something that people value and use, but more likely to protect yourself from sudden changes in technology.

Brands need to be more linear in their expression and start thinking about themselves as social objects - sitting at the centre of a conversation and stimulating that conversation -  rather than as just social media stars.

And coming back to Facebook, this is why and how the brand has got it right and still reigns supreme. Recently, my team in New York were fortunate enough to have a chat with Ben Blumenfeld, Creative Lead at Facebook, and asked him for his views on social media and design and the Facebook approach.

Straight up, Ben confirmed that, “I believe a designer’s purpose is to create positive and meaningful social change.  It’s not about selling goods.”

We went on to ask him what he thinks are the equities of the Facebook brand. His response, “Connection – being central – authenticity…We are about creating meaningful experiences.”

Whilst it may be extreme to say that only the strongest brands will survive, it is probably more precise to say that only brands with this kind of clarity will prosper to become more than just noise in the virtual ether. And, as brand channels to markets become ever more diverse, identification of brand proposition and linear thinking about how this can and should translate - both behaviorally and aesthetically - remains key, not just as a social media/marketing strategy but across all key retail and marketing mediums.

And, again, this is where Facebook has triumphed. By being about utility and facilitation rather than self-expression it is one of the world’s leading global brands by actually – and ironically some may say – not focusing on the brand and its identity but keeping the focus on its end purpose of connection.

As Ben testifies, “Facebook has always been more about connecting friends and family and not inserting ourselves into that interaction. The result is people equate whatever experience they have with friends with our brand."

He added that the brand design development for the future will be about looking for more ways to get people to feel that attachment to Facebook - and that it's mostly about providing even better ways to connect with people and highlighting those great experiences people have… “Moving forward we are exploring how Facebook can be something that delights, helps people - a third party that facilitates…”

And this brings us back to the role of brand identity and design. Design is always the starting point – whether of an iconic fashion item such as Burberry or of an easy to use system design such as Facebook. It is the constant connection point and good design helps the propagation of ideas to secure entry and a presence across all channels. And, therefore, to become a successful social object brands need to find new ways to translate experience into design so design – and its new behavior - becomes conversation on and offline.

In the past we wanted to be liberated, in the future we will want to be united. And whilst social media is now a part of our personal and business life, it is more about the opportunity for brands to have a more meaningful connection – on very many levels and in very many parts - and the widespread change of designing for social impact which is affecting the whole brand and design community as brands both do right by people and DEMONSTRATE that they’re doing right by people.

Jonathan is a designer and co-founder of Pearlfisher, the leading American and UK design agency, with one of the best track records for design and commercial effectiveness for brands.