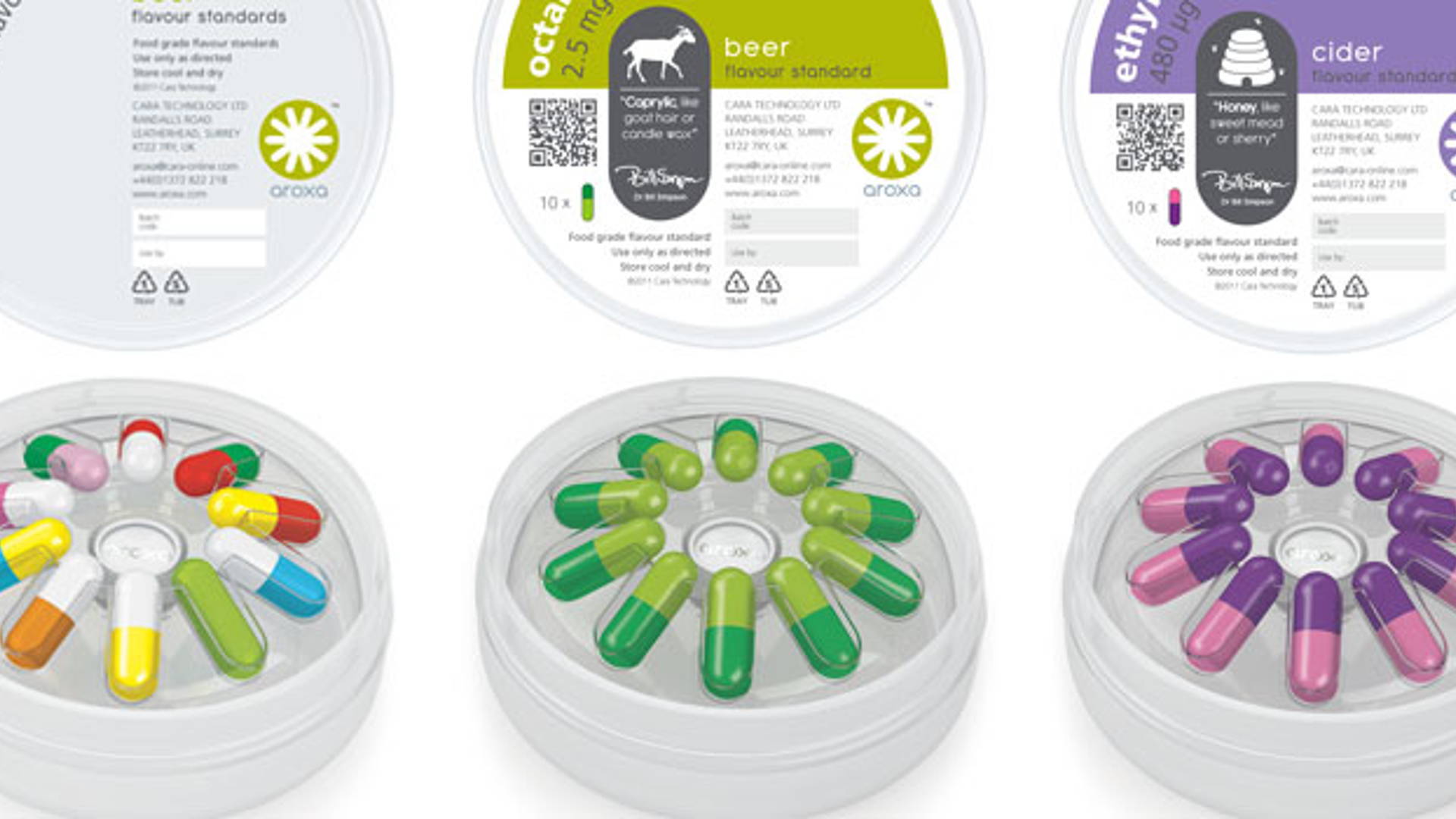 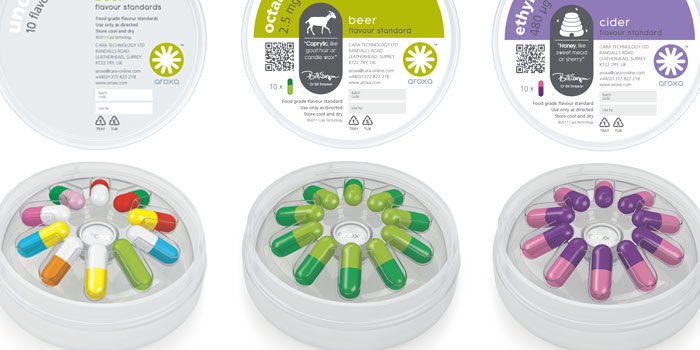 "Cara Technology offers sensory taste testing. They asked us to create a new brand using the name Aroxa and a packaging range for their huge range of flavour standards. Flavour standards are chemically constructed powders that are sold in gelatin capsules. Professional tasters are taught to recognise each flavour and detect abnormalities in quality control taste tests.

Cara Technology required a premium design, to increase the perceived value of the product, that would appeal to a target market of scientists. We produced a logo and pack design that work together to create a highly recognisable and ownable brand"

"Bristol based innovation & design consultancy Kinneir Dufort  created this cohesive brand and packaging range for AROXA™; the new brand in sensory testing whose product range includes over 200 flavour standards. Flavour standards are chemically constructed powders that replicate a suite of tastes and smells. Professional tasters are taught to recognise each flavour and detect abnormalities in quality control taste tests.

Existing flavour standards are delivered in small gelatin capsules packed in standard “pill pots".  AROXA™ wanted to retain the capsule format, but improve the value proposition and user experience through enhanced primary and secondary packaging. With a complex range of over 300 SKUs spanning 6 sectors the design needed to convey a premium product offering through the fewest possible components.

New packaging was created to hold the capsules in a distinctive pattern, appealing to the scientific nature of the target market and accentuating the natural beauty of the product. The AROXA™ logo - the Florox – was created in parallel. It represents a sensory explosion and reflects this distinctive placement of capsules within the primary pack. The strong relationship between logo and product provides an iconic, scientific and ownable identity, whilst the introduction of a tray to hold each capsule in place improves protection for the capsules, enhances the user experience and increases the perceived value of the product.

A colour palette was chosen to distinguish specialist flavour ranges across existing and new industry sectors and the signature of the inventor: Dr. Bill Simpson, was incorporated as a mark of authenticity. Complimentary secondary packaging was developed to house multiple primary packs in kits as well as printed collateral with detailed information on each flavour.

In parallel to creation of the AROXA™ flavour standards several other products were developed to reflect the same values and styling.

Uno - a new product that offers 10 different flavours in the same pack.  Previously unachievable when packed in standard “pill  pots" due to cross contamination caused by the capsules touching each other, the introduction of a tray to separate each capsule enabled multiple flavours to be packed in the same product for the first time.  This innovation allowed AROXA™ to offer easily affordable 'starter packs'  to new customers.

Discovery - packaging to house a range of "beta" / research grade flavour standards. Deliberately styled to look 'in development' this included the creation of the AROXA™ Discovery identity.

The fusion of bespoke elements with off-the-shelf components allowed AROXA™ to produce a truly memorable, differentiated and ownable brand and packaging range at an achievable cost , that will allow them to grow taste testing in both established and new sectors." 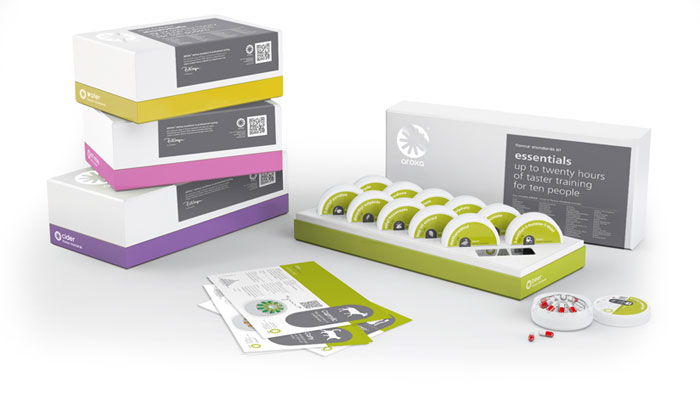 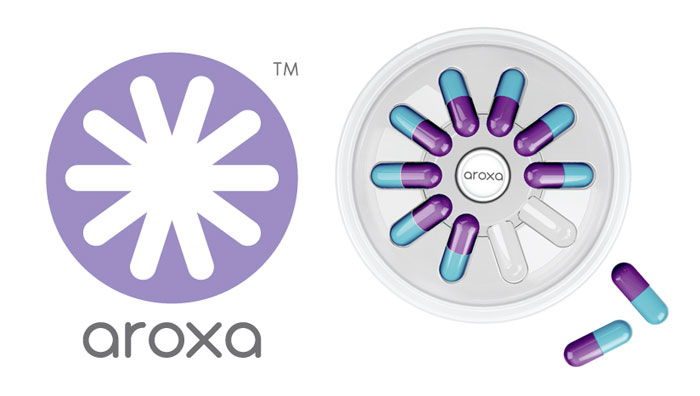 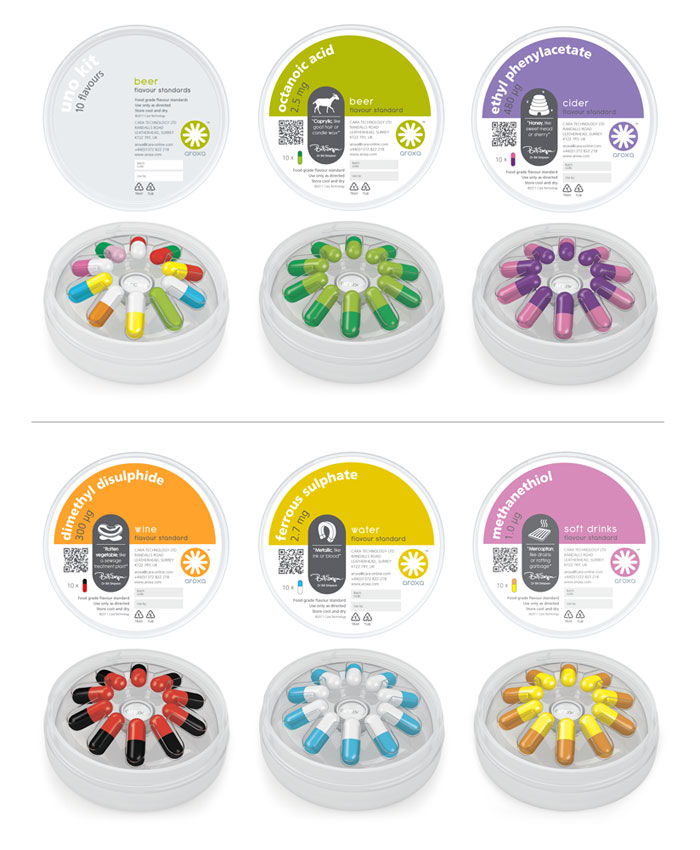 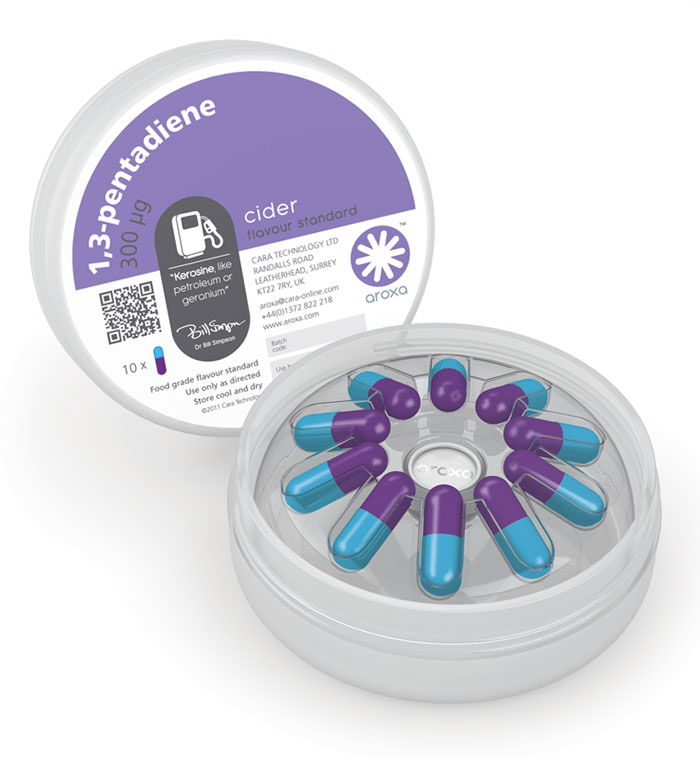 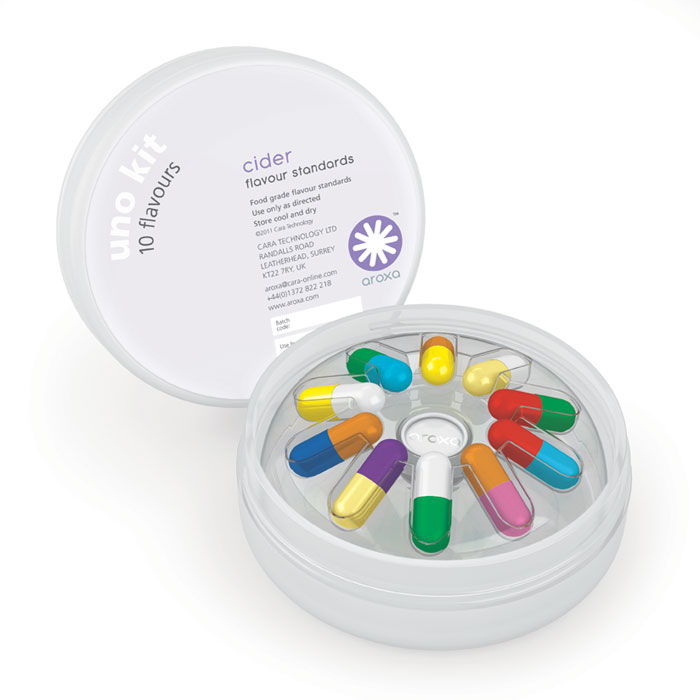 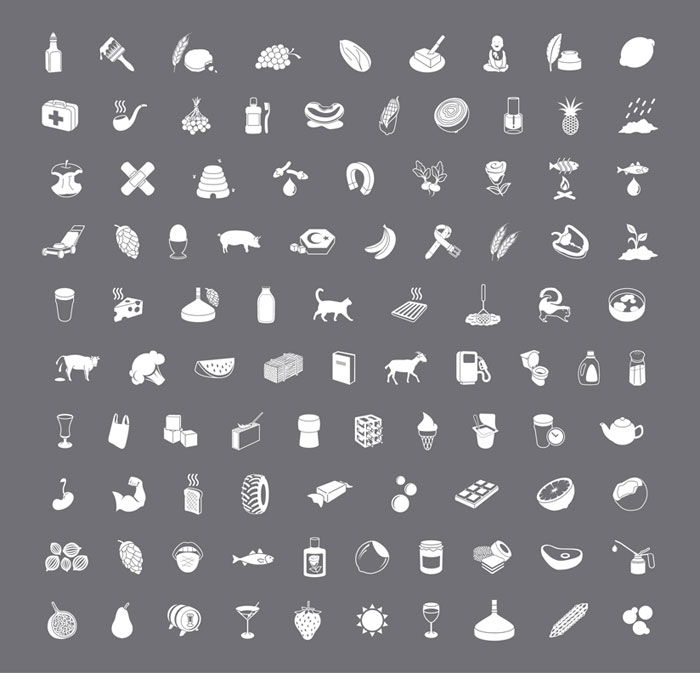