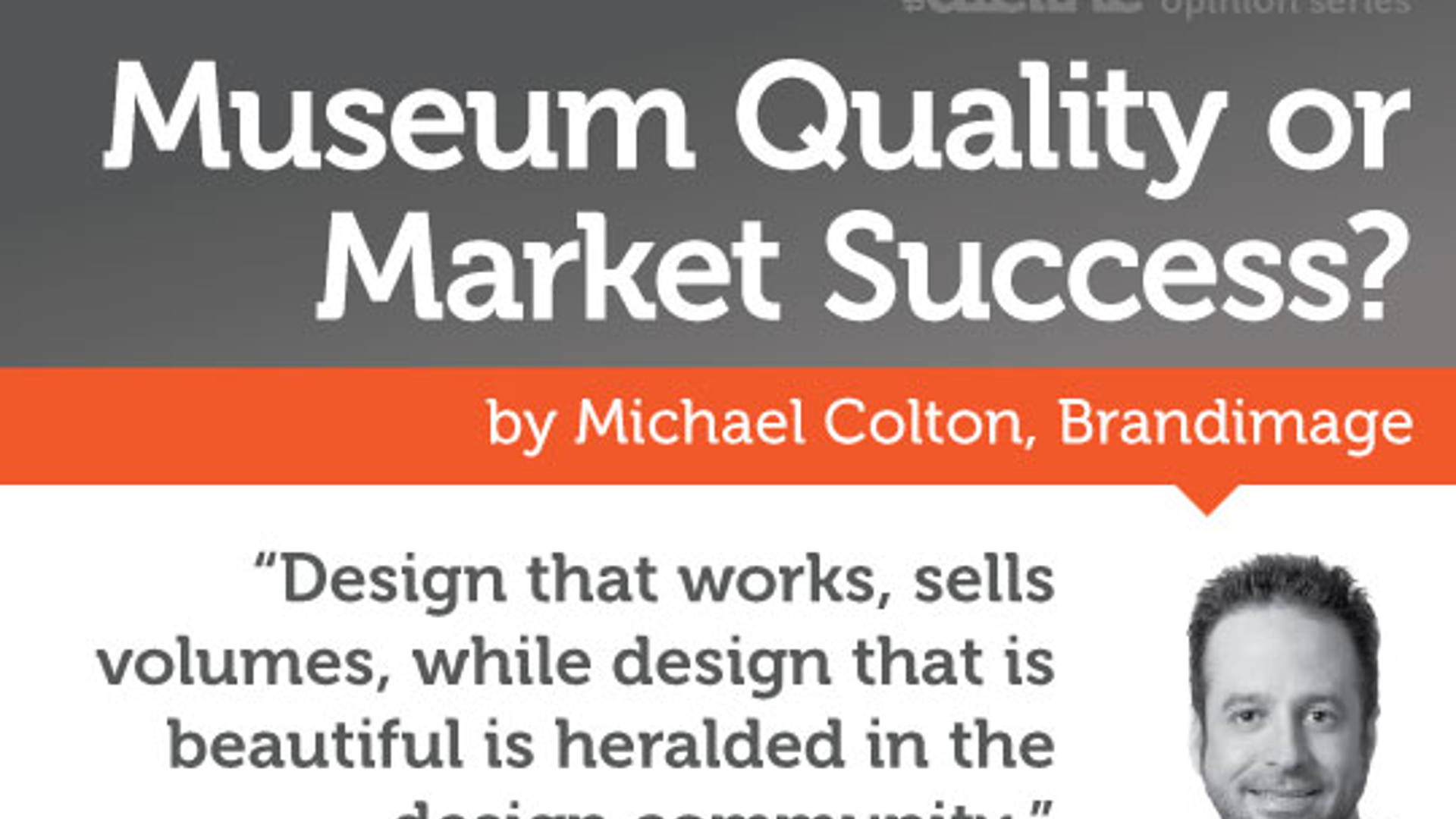 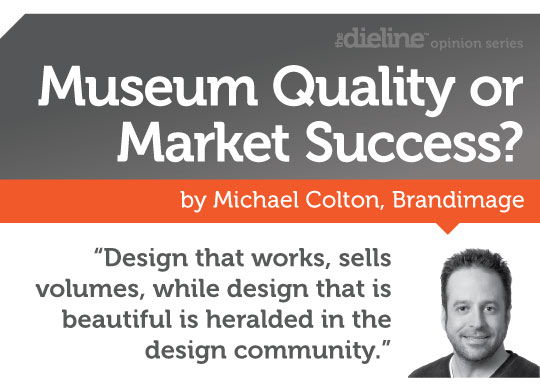 It happened again. Another aesthetically pleasing package worthy of the Dieline has been pulled from the shelves of the supermarkets across the country for poor sales performance. 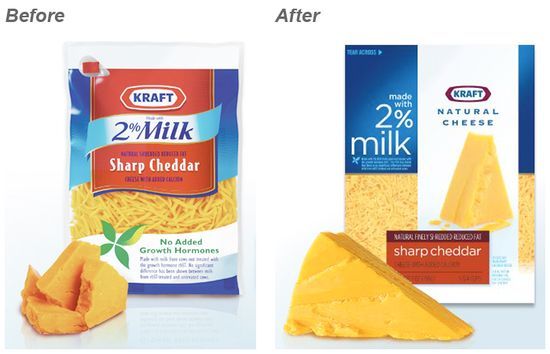 This time it Kraft cheese. It was a design generally held in high regard. Within my firm, designers have frequently featured it as scrap or within mood board shown to clients during the concepting phase of the design project. It not only served as design inspiration, but also as a little nudge to the client to say "Look! Your competitors get it. More and more they are willing to take a risk and put well-designed packaging on the shelf.” Unlike it predecessor, this cheese package design had no shmaltzy, patronizing, optimistic script lettering in which the designer at the helm must have defaulted to sending out for a calligraphy instead of studying and refining ownable letterforms. The Kraft cheese design was, I thought, refreshing, elegant and minimal. The typographic treatment was coolly understated. The design was also significant to me because it symbolized a CPG industry-wide shift in the perception of effectiveness of design in solving business challenges. The largest CPG companies like P&G and Kraft are finally catching on to that which we designers have long presumed—good design matters and its not to be regarded as the end-stage afterthought to be grouped with box substrate selection and printing technique where focus is on saving a few extra pennies in operational costs. 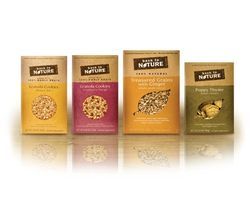 Along with the bold redesign of Back to Nature and Kraft Dressing, this cheese redesign was to further demonstrate Kraft’s emergence as the next progressive company to leverage design as the strategy for marketplace dominance. It was a shock when the cheese packaging was pulled and then replaced with something apparently more mundane and uninspiring. One can only speculate what spawned the shift. Out of curiosity, I purchased a few of the remaining packs of the now discontinued design. 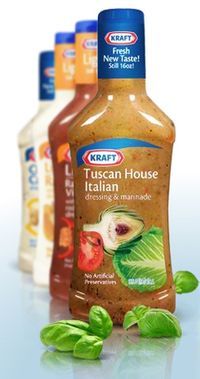 For comparison, I also purchased an adjacent competitor, Sargento shredded cheese. At our Fourth of July block party, I shared both packages with each of 20 women. Remarkably 18 out of the 20 preferred the seemingly provincial, unremarkable Sargento pack. This was yet another package with an unremarkable design, with unremarkable script and those all too common ribbons shapes to contain more copy. The reason given for the majority selection at the block party apparently had nothing to do with aesthetically pleasing design. In fact, of all of the 18 respondents who selected Sargento, none of them sighted design as impetus for their decision. Most of the women said the Kraft packaging didn't look like food. I was shocked and humbled. But then I remembered all of those focus groups I had attended in which gorgeous work that the whole design team had championed had fallen flat after the first round of qualitatives.  In those moments behind the two-way mirror, I recall feeling the futility of my impassioned creative efforts (no matter it was just the design of a scented room deodorizer).

As much as I hate to admit it, as I am maturing as a designer, I am noticing that we must make a distinction between museum quality design and mass-market design. So what's the difference? The difference has to do with design that pleases versus design that works. Don’t get me wrong. You can have both. But those examples are hard to come by. To understand design that works, you must evaluate design under a different lens than the one used to identify aesthetic beauty. Design that works seeps beneath consumer consciousness, while we are very aware and appreciative of museum quality. Design that works uses subtle visual cues such as beading water on glass or the reveal of the inner fleshy part of the fruit to trigger hunger and craving in the primitive brain. Design that works, sells volumes, while design that is beautiful is heralded in the design community. To any designer with a fetish for tattoo-like filigree or a penchant for overlapping color to create a transparent effect, I say, just go to the largest outdoor festival or fair you can find in your area and witness for the day, those who buy the products you design. It’s a humbling experience to see those hoards of people consuming fast-moving consumer goods with apparently no awareness or care for the graphic tension on packaging or the choice of interesting and unexpected typographic compliments. In fact, most of the time, design is overlooked. From the moment all people wake up in the morning to the moment they go to bed, most objects used are without second thought. If we do think about them, it’s usually because they are not working properly. And each object has its own design story.  The object was most certainly created by careful, impassioned designers that endured client meetings, multiple rounds of revisions and perhaps some late nights, in the effort to get those creations to market. One might argue then that the best design is unremarkable. One might argue that the best design is the one consumed mindlessly by those hoards at the county fair. One might argue that the best design is in the trashcan because it has been successfully purchased, used and discarded all without much conscious consideration.

In the past, when I've discussed this viewpoint with other designers, I have been challenged with the example of the now folklore Tropicana debacle. If the measure of design success simply has to do with design that works, how is it that Tropicana's redesign was recalled in response to design conscious consumers up in arms about the unfortunate shift in the aesthetics of the brand? I suppose its possible. But consider an optional point of view. The Arnell design left behind nearly everything that worked. For one, the package lost its chromatic strength. That is, saturation and contrast of the rich warm reds and oranges that accentuated the playful depiction of fruit punctured by candy-striped straw. It was that chromatic strength that allowed the whole Tropicana product line to appear to telegraph its appetite appeal beyond the surface plan of the shelf, past its competitors, as it captured consumer attention. IN the Arnell design, chroma was perhaps its greatest weakness. Interestingly enough, in the effort to diffuse the unrest, Tropicana returned to its iconic fruit depiction. But the marketing team found themselves back at square one. Design savvy consumers were, perhaps appeased but, nonetheless, not drinking orange juice as much anymore. Sales across the category are in decline because consumers are just not sitting down for breakfast as much with a glass of sunshine. Either that, or they’re concerned about the glycemic effect of taking in so much sugar. At first, the Arnell design was embraced because it promised to downplay the childlike sweetness and recast Tropicana as a juice with functional healthy benefits. If you don’t believe me, check out Trop 50, with only have the juice of regular—it retains the Arnell design (As a matter of facts, its performing exceeding well in the market). While the outrage has been undone, the brand still struggles to meet performance goals. In effect, the beloved design no longer works.

So what does it all mean? What do we as designers do with the passion for making beautiful things? The Dieline is my Internet porn. I lust after the creative genius. I cringe with jealousy towards those designers fortunate enough to have bold, risk-taking clients. What am I to do with my values about that which I thought was superb design? If my argument is true, then designing great packaging just got twice as hard. Not only do I have to continue to finesse my eye for beautiful things. I must also understand the way that that the aesthetically pleasing visual language works on the consumer unconscious to create desire. Only in doing both these things can we satisfy ourselves as designers while we satisfy the business challenges of our clients.

Michael Colton is the Director of Design and Strategy at Brandimage - Desgrippes & Laga.